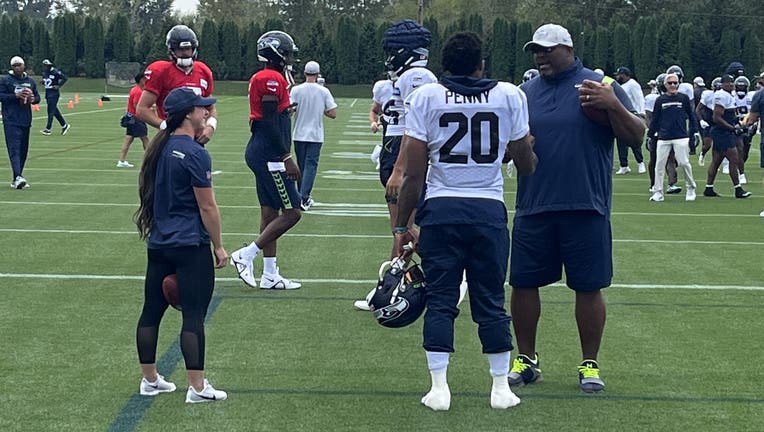 RENTON, Wash. - Seattle Seahawks head coach Pete Carroll said Tuesday that Geno Smith will start the team's preseason opener against the Pittsburgh Steelers this Saturday as the battle for the starting job with Drew Lock continues.

"He’s still going with the ones," Carroll said of Smith after practice on Tuesday. "He’ll start the game this weekend and he’s ready to go. He had a very solid day today and he made some big throws."

Smith had nice side-arm touchdown throw to DK Metcalf in a red-zone drill and came back with a strike to Marquise Goodwin on a post between defenders late in practice as well.

Both Smith and Lock have made strides forward as the offensive performance has ramped up after a shaky opening week to training camp.

"Every day out here, it looks better," Carroll said. "We’re hitting more stuff every day. The first four or five days, they didn’t feel much, it wasn’t happening, guys were really on top of stuff. We’re working really hard to find our spacing to get open. The defensive backs have been doing a nice job, we’ve had more pass breakups than we’ve ever had. But, the last couple days the QB’s are really zeroing in and they’re finding guys, and we just missed having a huge day today on a couple deep [throws]. So, today was one of our best days."

Lock had the slightly better showing in last Saturday's "mock game" scrimmage at Lumen Field. Lock led a pair of touchdown drives and a field goal drive during his five series. Smith had a touchdown and two field goals in his opportunities, though the offense became more stagnant under Smith at times.

"He was on time. He was quick with the football, made good decisions with it. Unfortunately, missed the chance on a ball down the middle late in the game that would’ve been nice for a day’s work. He was really comfortable and poise. He was good at it," Carroll said of Lock's showing in the mock game.

"I think it was his most solid performance. He’s had really good days too, but I think that was the best one under the circumstances he went with the ones and the twos and all of that. I really liked his poise, his comfort in the pocket, handling stuff, adjustments, calls that he had to make at the line of scrimmage. All of that he handled really well."

The preseason games will be vital to Carroll and the coaching staff for determining which quarterback will get the nod for the regular season opener against the Denver Broncos on September 12 on Monday Night Football.

Cornerback Artie Burns also was injured during Tuesday's session. He was covering receiver Deontez Alexander when he pulled up with an injury that Carroll said was a groin issue after practice.

"He tweaked his groin today unfortunately in the one-on-ones. I don’t know what that means at this point, but he felt it, so we had to get him out of there," Carroll said.

Here are Carroll's comments on each player's status:

– Jones: "I need to hear more for the next two days to see what’s going on. He’s feeling really good. I talked to him this morning but I have to get the report of that from the doctor. I haven’t heard that today."

– Neal: "He sprained his ankle. He had a high ankle sprain seems like weeks ago now, but probably a week ago. It’s a pretty good ankle sprain."

– Collier: "He's OK. He sprained his elbow [in the mock game] and it’s going to take him a couple days. He might be able to get back this week. We’ll see."

– Brooks: "He’s going through the walkthroughs. You know he’s running around at the walkthroughs but not ready yet to come back out on the practice field. He’s just not going to let this hold them back. He’s just battling. So, I don’t know exactly when but he’s getting all the work in the walkthroughs which is really important, so he gets reps every day."

Smith: "He aggravated the other side of his hip. I can’t tell you. It’s not a good sign for him making progress right now. It’s one thing or another. When he was out here, he flashed really well. He’s really solid. Everybody said look at this guy. And then we couldn’t see him anymore so we couldn’t look at this guy."

– Eskridge: "He’s getting really close. He’s out here and doing a lot of stuff with him We haven’t hit top speed with him yet. So, he’s like 70% throughout everything but he can do all the work but can’t go top speed yet."

– Brown: "He’s making progress. He’s running and working out but it’s not like in the next day or two. It’s going to be some time still. He hasn’t been able to run full speed yet on the field. Until he can do that, we won’t know anything."