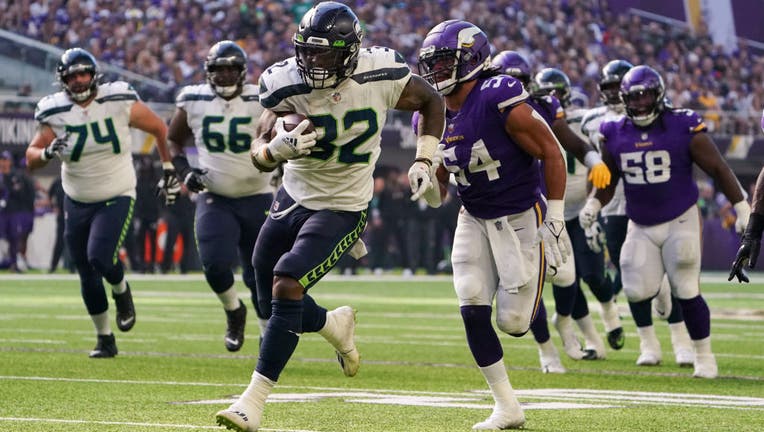 MINNEAPOLIS, MN - SEPTEMBER 26: Seattle Seahawks Running Back Chris Carson (32) scores a touchdown on this 30-yard run during the quarter second of a game between the Minnesota Vikings and Seattle Seahawks on on September 26, 2021, at U.S. Bank Stadi

Wide receiver DK Metcalf is with the team for the start of their offseason program but still not taking part as he recovers from foot surgery.

"I know he's really excited about being back," Carroll said. He's still rehabbing from surgery, but he's involved with everything we're doing. He's really tuned in, and I'm really happy to see the way he's returned to us. There's a lot of stuff in the future coming up and all of that. He seems to be very focused on what's going on right now and being in position to help other guys as we get started. So he's shown a really good mentality about the return."

Metcalf showing up for the offseason program is notable in itself. Metcalf is entering the final year of his rookie contract with the team and is eligible for a contract extension should the Seahawks be willing to engage on the topic. While it may become a bigger story as the offseason progresses, Carroll said there hasn't been discussions yet about the topic.

"So as far as conversations and all that kind of stuff about the future of it, we haven't really been directly on the topic at this point," he said.

Safeties Quandre Diggs and Jamal Adams are both progressing well from their surgeries, too. Diggs broke his leg in the team's season finale against the Arizona Cardinals in January. Meanwhile, Adams had surgery to repair a torn labrum in his shoulder.

"Those guys are doing great. They're really excited, enthused with what's happening. Really positive. It was great to see Quandre when he came out to sign his deal. And really, everybody was really pumped about that. Both those guys are working in maintaining the rehab that they're in to try to maximize these few crucial weeks in here until they get back in here. Everybody's connected and zooming and doing all of our stuff and that's just working out great."

However, the status of running back Chris Carson remains uncertain after neck surgery. Carson appeared in just four games last year before eventually electing for surgery to address a disc issue in his neck.

"From what I understand, he has a disc issue that needs to be fused, so that’s a surgery that can get him back somewhere late in the spring from what I have heard. We will see what happens with that," Carroll said in November.

But Carroll has remained somewhat cagey about Carson's future in recent months. That continued with his comments on Thursday.

"We really don't have any real updates at this time," he said. "It's still going to take some time, still working through it, and it's still a process and he's really working hard. I know that and it's really important him to take it as far as he can. So we'll just have to wait and buy some time to figure that out."

If the Seahawks invest an early draft pick in a running back next week, that could be an indication the team isn't confident in Carson's ability to return to the field. He has two years remaining on the three-year contract extension he signed with the team prior to last season. However, the final year is a voidable year.

Carroll said that the team has not closed the door on potentially re-signing Duane Brown this offseason either.

"We've not moved on from that. We're still talking," Carroll said.

The Seahawks now have three players under contract at quarterback following the re-signing of Geno Smith this week. The QB room includes Smith, Drew Lock and former University of Washington quarterback Jacob Eason.

"It's real important for this stability moving forward," Carroll said of Smith's return to the team. "He's been here a number of years. He's got great background with us. And so he brings that that real sense of what we're all about, and he can he's helping the younger quarterbacks as they're transitioning into learning our stuff. He's a great illustration for them in what it takes. It feels good. He's really excited about the opportunity and it's going to be a real competition."

Meanwhile, Lock is getting up to speed in Seattle after being a part of the compensation sent to the Seahawks in exchange for Russell Wilson in March.

"His first impression for me is that he's really excited about but the new energy of our club, the energy that he can feel from the players and the coaches about his opportunity," Carroll said of Lock. "He's upbeat and very comfortable with how everything's gone so far. It's been really quick, but he's been open to say that, you know, and express that. And so, you know, it's a new lease on life for him. And he's looking forward to taking full advantage of that. He's coming in with his competitive hat on and ready to roll. It's going to be really exciting to see how he fits in."

The Seahawks hold the No. 9 overall pick in the draft and could take a quarterback there as well. This year's quarterback class has generally lacked acclaim compared to prior classes. Liberty's Malik Willis and Pittsburgh's Kenny Pickett are considered the two top prospects in the class.

General manager John Schneider said there has been a lack of "buzz" surrounding the group and compared to the 2011 class that featured Jake Locker, Christian Ponder and Blaine Gabbert. All three went in the top 12 picks despite the lukewarm assessments of their ability entering the draft.

"I would say there's a quietness about it that can make people feel either anxious or extremely calm," Schneider said. "There doesn't seem to be a lot of buzz right now. That's happened in the past, too, where all sudden, I think it was the year that Jake Locker and (Christian) Ponder and that whole group of guys went. It was pretty quiet and then they all went really high."

The NFL announced that they will be releasing their schedule for the upcoming season in portions over the next few weeks with the full schedule release coming on May 12. The first Thursday Night Football game scheduled to appear on Amazon Prime Video will be announced during the first round of the NFL Draft next week. The five international games will be announced on May 4. Then a few select games will be released ahead of the full release at 3 p.m. PT on May 12.

The Seahawks are waiting to see if they will be heading internationally this season. Three of their scheduled road opponents this season are among teams hosting international games. The Arizona Cardinals are hosting a game in Mexico City, the New Orleans Saints in London, and the Tampa Bay Buccaneers in Munich, Germany.

There have been some rumblings of the Seahawks being the team the Buccaneers will play in Munich. A comment from Schneider during Thursday's press conference may have been an indication of it as well.

"We turned off the music this morning because we've listened to every genre of music you could possibly listen to over the last three weeks. So we started with German lessons this morning in there while the film was running," he said.

The Seahawks played their first regular season game abroad in 2018 in London against the Oakland Raiders.