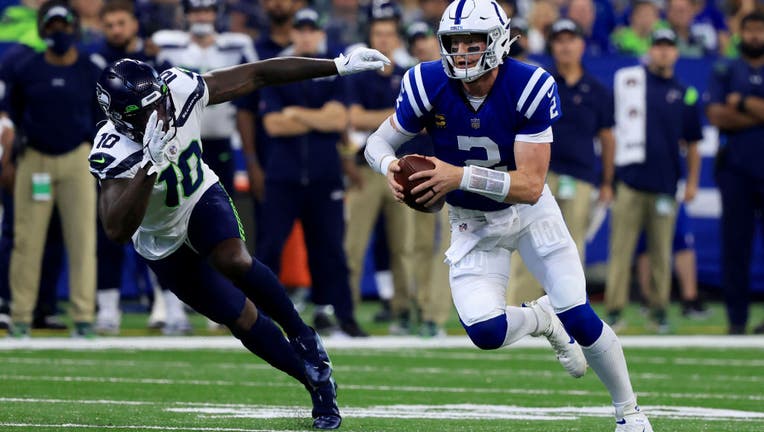 INDIANAPOLIS, INDIANA - SEPTEMBER 12: Carson Wentz #2 of the Indianapolis Colts runs the ball while being chased by Benson Mayowa #10 of the Seattle Seahawks at Lucas Oil Stadium on September 12, 2021 in Indianapolis, Indiana. (Photo by Justin Caster

Mayowa, 30, has played in 28 games with 16 starts for Seattle over the last two seasons after returning to the team that gave him his start in the NFL in 2013. After posting six sacks in 2020, Mayowa managed just one last year as Seattle altered his role and asked him to drop into coverage as a linebacker far more frequently. The move didn't pay off as Mayowa's production slipped. His only sack came in the season opener against Indianapolis.

Mayowa signed with Seattle an undrafted free agent out of the University of Idaho in 2013 after catching the team's eye during the regional combine process. He left Seattle after that season and played for the Oakland Raiders, Dallas Cowboys and Arizona Cardinals before returning to Seattle.

Diggs, Dissly, Jones and Woods all reached deals to re-sign with Seattle. Nwosu joins Seattle after four seasons with the Los Angeles Chargers.

The only known agreement yet to become official is the addition of cornerback Artie Burns. General manager John Schneider acknowledged the agreement with Burns during the team's press conference on Wednesday. However, Burns has yet to sign his deal with the team.

Guard Phil Haynes was the only one of Seattle's three restricted free agents to be tendered a contract ahead of the start of free agency on Wednesday.

Haynes, 26, has played in just seven games over three seasons for Seattle since being drafted in the fourth round of the 2019 NFL Draft. Injuries have kept Haynes from being available regularly. However, Haynes has played well when he's had the chance.

The Seahawks gave Haynes an original round tender worth $2.54 million. Other teams can negotiate a contract with Haynes and sign him to an offer sheet, but the Seahawks would have a chance to match. If Haynes were to leave, they would receive a fourth-round draft pick as compensation.

With three new drafts picks coming their way from the Denver Broncos for this year as part of the Russell Wilson trade, the Seahawks now have eight selections in this year's NFL Draft.