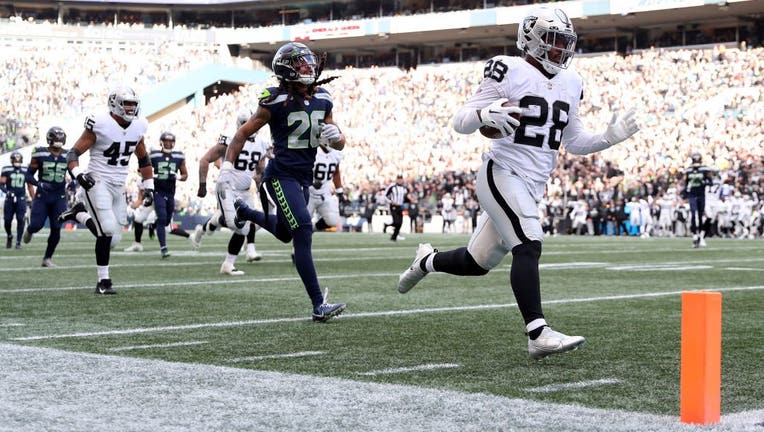 SEATTLE, WASHINGTON - NOVEMBER 27: Josh Jacobs #28 of the Las Vegas Raiders scores a touchdown during the first half against the Seattle Seahawks at Lumen Field on November 27, 2022 in Seattle, Washington. (Photo by Steph Chambers/Getty Images)

RENTON, Wash. - The Seattle Seahawks are once again searching for answers to fix running game problems on defense.

Josh Jacobs rushed for 229 yards as part of a 283 rushing yards on the day for the Las Vegas Raiders in their 40-34 win over the Seahawks in overtime on Sunday afternoon.

Both Jacobs' 229 yards and the Raiders' 283 yards are franchise records for a Seahawks' opponent.

"Well we made it through the day today taking a real serious look at making sure that we're back on track in the areas that we didn't play well yesterday, and that's the stuff that happened upfront in the running game, really, on both sides of the ball," head coach Pete Carroll said on Monday.

In a lot of ways, the success of the run defense has determined if the Seahawks win football games this season. When they've held their opponent to under 150 yards rushing as a team, they're 6-0. When they've allowed over 150 yards to an opponent, they're 0-5.

"There was issues that we weren't connected as well as we want to be, you know, where we fit right," Carroll said of the run game struggles against Las Vegas."We gave them some runs that we were a little bit exposed because we were doing some stuff in coverage. And those things are easily fixed. And so I think we can get right back on track. We need to do a better job against the two-back stuff, which we have seen a little of during the season and we got to do better. We saw quite a bit of in the game yesterday."

Carroll said after the game last night their game plan involved doing some schematic things geared toward limiting Davante Adams in the passing game. It meant more nickel defenses being called with five defensive backs on the field and a lighter defensive line.

"We did some things in the game we wanted to on defense to try to slow down Davante [Adams] and take him kind of real seriously," Carroll said after the game. "We gave up way too much in the running game. We did not play the run worth a darn in getting that done. We didn't rush the passer as well as we needed to either. That's just what happened in this game."

Jacobs blew that game plan up with his continued success on the ground. The 86-yard touchdown run in overtime that won the game was just the cherry on top of the performance for the Raiders. Jacobs followed fullback Jakob Johnson through the gap between the right tackle and tight end. Johnson blocked middle linebacker Jordyn Brooks and crashing tackle Jermaine Eluemunor drove defensive tackle Poona Ford inside. Jacobs then beat backup safety Josh Jones one-on-one as the last line of defense fell and Jacobs ran to glory.

"Well we hit the line of scrimmage and when the ball broke, the two deep safeties got to help us and clean it up and make the tackle. We gotta get him down," Carroll said of the play. "The ball did break the line of scrimmage, got through and so the guys have to put him down. We were in a coverage in the situation looking for something, and it was one of the plays that was in my mind that we weren't as well situated against the run, and so we just didn't make the play. If the ball breaks we expect him to make 8-10 yards or something like that, not the whole thing."

After the New Orleans Saints rushed for 235 yards against Seattle on Oct. 9, the Seahawks appeared to have gotten their run issues straightened out. Four straight games holding an opponent under 150 yards followed as Seattle ran off a four-game win streak that included holding Saquon Barkley to just 53 yards in a 27-13 win over the New York Giants in Week 8.

Rachaad White then rushed for 105 yards as part of 161 total rushing yards for the Tampa Bay Buccaneers two weeks ago in Munich, Germany in a setback for the group. Then Jacobs delivered the best day by an opposing runner in franchise history to Seattle on Sunday afternoon, surpassing the 221-yard effort of Los Angeles Raiders running back Bo Jackson in 1987,

"They're just disappointed. Disappointed we're not doing better," Carroll said of the defense. "And so we're not as clean as we need to be, you know, and both teams did a nice job against us and we just gotta get better and keep working on it. We know where we've been and so we just got to get back at it."

Additionally, Seattle's pass rush has also struggled in recent games. They've managed just one sack and three quarterback hits in losses to the Raiders and Buccaneers.

"We thought that we could get some good edge pressure, get our guys up inside mixing with our stunts and all of that, but it just didn’t. We didn’t hit," Carroll said. "They held the football quite a bit yesterday, he had some extra time and it helped him in the throwing game. We have to just tie it together, we have to make sure that we are tying it together and doing a good job of getting back on track."

So, for Carroll, what does it look like when this team's pass rush is producing as expected?

"It looks like we get a feel for the interior push whether we are stunting or not," Carroll said. "We want to have a feel if the pocket is moving towards the quarterback, and then the guys off the edge are roaring. They work in conjunction. They’ll work their games, and we have two-man games, and three-man games that we work, but it all starts with the push in the middle, and the factor on the edge. They did a good job against us, and they were concerned about it. They paid respect to it, and made it a little harder on our guys, but that is what we are trying to get done."

– Safety Ryan Neal has a chance to play this week after elbow/shoulder injuries.

The Seahawks appear to have lucked out with the health status of safety Ryan Neal.

Neal was injured in overtime of Sunday's loss to the Las Vegas Raiders on a third down stop of running back Josh Jacobs. Neal was in obvious discomfort after the play and remained on the field for a couple minutes before getting up and slowly walking off.

"He's a little banged up," Carroll said. "His elbow is the lead concern but he did bang his shoulder as well. And so we'll be taking care of both. His elbow's of more concern. They think he's going to be OK but miss a couple of days here but think he'll have a chance to play this weekend. That's really good news for what it looked like. We were concerned that it might be more than that."

Neal was injured taking on the block of Raiders fullback Jakob Johnson on the third down play. His elbow also was badly bruised in the collisions.

Neal has played really well in taking over for Jamal Adams at the safety spot. Josh Jones handled the job for a few weeks while Neal returned to full health from a high-ankle sprain in training camp.

– Linebacker Darryl Johnson out for the year following foot surgery.

Darryl Johnson will miss the rest of the season for Seattle after having surgery on his injured foot.

Johnson appeared in three games for the Seahawks earlier this season before being injured in the team's Week 4 win over the Detroit Lions.

Despite the small sample size, Carroll had really liked what Johnson had shown in his time with the team.

"I just have come to appreciate his general ball sense and awareness," Carroll said of Johnson in September. "He has a really good feel, he is a really good technician, he has flexibility, and can play different spots. You could have read into that he could contribute on special teams in a big way, and he might have better awareness than other guys. Covering kicks at 260 pounds, that’s a special player. He has given us some stuff."

Linebacker Alton Robinson is still trying to rehab back from a knee injury sustained in the final game of the preseason.

"He's running and moving. He's not ready to be released yet from rehab so he's still there," Carroll said of Robinson.