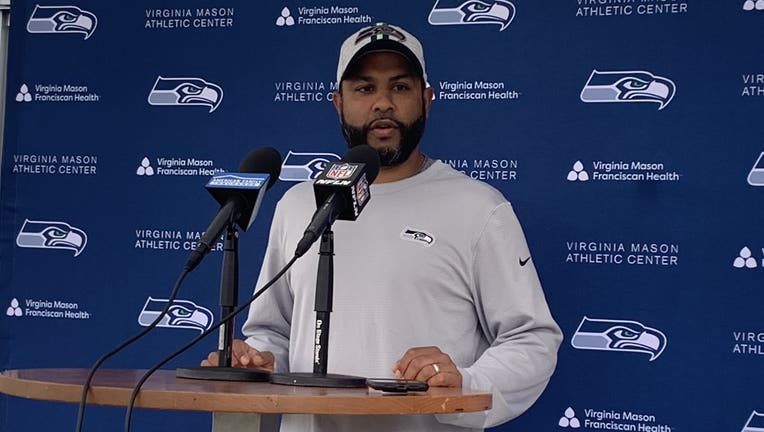 Sean Desai, the assistant head coach/defense of the Seattle Seahawks, speaks with reporters after practice at the Virginia Mason Athletic Center in Renton, Wash. on June 14, 2022. (photo by Curtis Crabtree / FOX 13 Seattle)

RENTON, Wash. - The Seattle Seahawks have several new members of their coaching staff this year and others just working in new roles. Sean Desai and Karl Scott have been additions to the coaching staff on the defensive side of the ball. Sanjay Lal returns to the staff after a year with the Jacksonville Jaguars, and Andy Dickerson takes over as offensive line coach.

The team had their mandatory veteran mini-camp last week and are wrapping up offseason work with a week of OTAs more focused on development for younger players on the roster. The group of assistant coaches spoke with reporters on Tuesday to give some thoughts on the team ahead of the summer break.

Here's a collection of comments from the group ahead about the team as they get set to depart for the summer:

– New assistant head coach/defense Sean Desai has been viewed as an integral part of the defensive philosophy shift to more of a 3-4 framework along with defensive coordinator Clint Hurtt. Desai said that – while he will definitely be able to bring some pieces to the table – this will still have plenty of head coach Pete Carroll's fingerprints.

"One thing that we have to understand is that this is still the Pete Carroll-Clint Hurtt defense that we're going to be seeing in 2022," Desai said. "They're going to have their stamps on, as they should. They've both earned that right, and especially Clint has earned that right, so this is going to be a lot of that. There are some flavors that we'll be able to bring in from my past experiences, and obviously Clint's been with Vic also. That way we'll be able to bring in some different philosophies and some different ways of doing things schematically, but you should be able to identify Clint Hurtt led defense this year."

"You see some length and speed out of both those guys, and they're unique in their own ways." Desai said. "Coby has really good ball skills at the top of routes, and he can really judge the ball well. Tariq, obviously his length shows up in so many ways, when he's pressed, when he's off, when he's playing the ball, in a chase, in a trail position. I think those guys are so eager and there's so much growth potential for them, which is another exciting thing.

– After a decent first season in Seattle after being traded by the New York Jets, Jamal Adams struggled last year as he battled through shoulder and finger injuries for most of the season. Desai said he looks forward to working with Adams and elevating his play for the Seahawks.

"I don't think challenges is the right word, to be honest. I think it's excitement," Desai said of working with Adams. "I think it creates excitement to be able to work with a special talent like that. That's what I prefer to hang my hat on, to be able to work with unique guys and put guys in position to go make plays and optimize their talents. That's what coaching is. You got to take the best out of each individual and make them the best that they can be. And that's what we're going to look to do with Jamal (Adams), and really all the guys back there."

– Defensive backs coach Karl Scott said that when it comes to the structure of what the defense is going to be, that's mostly already settled:

"I think that the hay is pretty much is in the barn as far as what we want to do," Scott said. "I think you're always fine-tuning and looking for ways to improve. I think that's the beauty of Coach Carroll, he's always searching for improvements, always asking you to back up your reasoning. Why do you think that way? How are you going to get them to do that? It's not to challenge you per se, it's more so to have conviction in your beliefs and know what you're talking about in order to get the guys to do exactly what you want them to do."

– Offensive line coach Andy Dickerson will be charged with bringing along rookie tackles Charles Cross and Abe Lucas. Cross already appears locked in as the starter at left tackle. Meanwhile, Lucas will be a part of a position battle with Jake Curhan and Stone Forsythe for the starting job on the right side. Dickerson gave his impression of the rookies so far:

"They both come in with great attitude," Dickerson said. "They ask great questions in meetings. They understand the information. Again, air-raid, they still run and they still throw. There's more passes, but they both ran, had the run game. When you're evaluating those guys, you see them move and see how their bodies move so you try to project how that would cover, show up in the NFL in our different schemes. At the end of the day, you're still blocking a guy in either protection or the run game, but they've been great, asking good questions."

– Wide receivers coach Sanjay Lal left the Seahawks after 2020 to join the Jaguars coaching staff along with former Seahawks offensive coordinator Darrell Bevell under head coach Urban Meyer. Lal is now back in Seattle and excited to work again with DK Metcalf and Tyler Lockett.

Lal highlighted one aspect of Metcalf's game as being the best among players he's worked with:

"The Stephon Gilmore ‘V’ route, pylon route that he caught, we've got walkthrough reps of him running it exactly like that. He had to get a yard inside the hash. He had to get his eyes back for a count, otherwise Stephon would not undercut him. It's very rare for a receiver under duress, under the lights to go do that in a game and he did it perfectly. You watch the clip, as soon as he touches the hash, his eyes come back inside, Steph goes underneath, and he puts his foot in the ground and goes over the top. Had it been one yard off that play wouldn't have worked. Even with all that precision, it was still a bang, bang play downfield. So he's the best I've seen at that."

And when it comes to Lockett, his ability has also made a big impression on Lal.

"Tyler's extremely unique in that he's such a savvy player. He's a thinker," Lal said of Lockett. "He knows the defenses inside and out. He knows the guy he's playing against. He knows all the nuances of how he's going to cover him. Tyler, within the framework of a concept, can come up with this sneaky way to get himself open. It's amazing to watch. I've coached one other guy like that. T.Y. was very much the same way where you're like, ‘How did he do that? How do you think of that on the run?’ It's beyond coaching. It's just this innate ability that these players have."