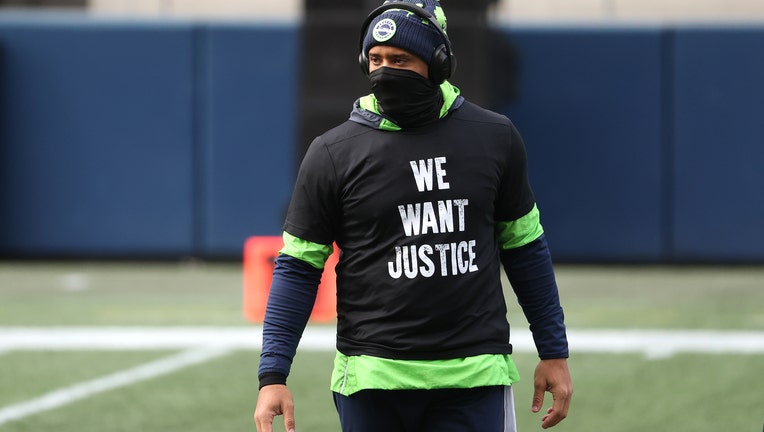 SEATTLE, WASHINGTON - DECEMBER 06: Russell Wilson #3 of the Seattle Seahawks warms up before their game against the New York Giants at Lumen Field on December 06, 2020 in Seattle, Washington. (Photo by Abbie Parr/Getty Images)

SEATTLE - Team captain and superstar Seahawks quarterback Russell Wilson is this year's team nominee for the Walter Payton Man of the Year award.

The award, to be presented during Super Bowl week at the NFL Honors television show when The Associated Press reveals its individual award winners, recognizes an NFL player for outstanding community service activities off the field, as well as excellence on the field. It was established in 1970 and renamed in 1999 after the late Hall of Fame running back.

“This year has presented significant challenges for us all, from the ongoing global pandemic to the continued social injustices witnessed this year,” NFL Commissioner Roger Goodell said. “The 32 Walter Payton Man of the Year nominees remind us that even in the face of adversity, players continue to raise awareness and use their voice and platform to positively impact their communities.

“The nominees will leave lasting legacies across the country in a time when we need leadership and strength the most.”

Wilson has led the Seahawks to consecutive Super Bowl appearances in 2013 and 2014, including the franchise's only title in 2013. He is a seven-time Pro Bowler, has been named NFC Offensive Player of the Week a franchise record 11 times, and holds 25 major franchise records. He has been voted team captain eight-consecutive seasons, won the team's Steve Largent Award three times (2014, 2018, 2019), and was previously nominated as the team's NFL Man of the Year nominee in 2014.

Wilson and his wife, singer Ciara, have been leading philanthropists in the Pacific Northwest.

“I think it’s so important to give back and to serve, because God has given me an amazing opportunity to love and make a difference,” Wilson said. “It’s been really important for Ciara and me, especially with everything that’s happened in 2020, to step up and try to make a difference in areas like racism, social injustice, and food insecurity and to be able to impact a family that is facing tough challenges.

“Since I got here in 2012, I understood there was an opportunity to use my platform to love, serve, and give back. That’s been one of the core principles of life that my parents taught me.”