NEW YORK -- The Seahawks NFC West rival St. Louis Rams filed on Monday for relocation to the Los Angeles area for the 2016 season, along with the San Diego Chargers and the Oakland Raiders, the NFL announced.

“The St. Louis Rams informed the National Football League today that the Rams propose to relocate to the greater Los Angeles metropolitan area," the Rams said on its Web page. "The relocation would be effective for the 2016 NFL League Year.”

The St. Louis Rams have played 21 seasons in the Midwest.

The franchise currently has a year-to-year lease with the Edward Jones Dome. Owner Stan Kroenke is part of a group planning a $1.8 billion stadium in Inglewood, California, and the team said on its web site that it sought to relocate to the greater Los Angeles metropolitan area, where the team played from 1946-94.

The Chargers and Raiders have teamed on a joint venture for a stadium in Carson, California.

Los Angeles, the nation's second-largest market, hasn't had a team since the Raiders and Rams left after the 1994 season.

Kroenke has ignored efforts by a St. Louis task force that is proposing a $1.1 billion stadium along the Mississippi River, not far from the Rams' current stadium built in 1995. 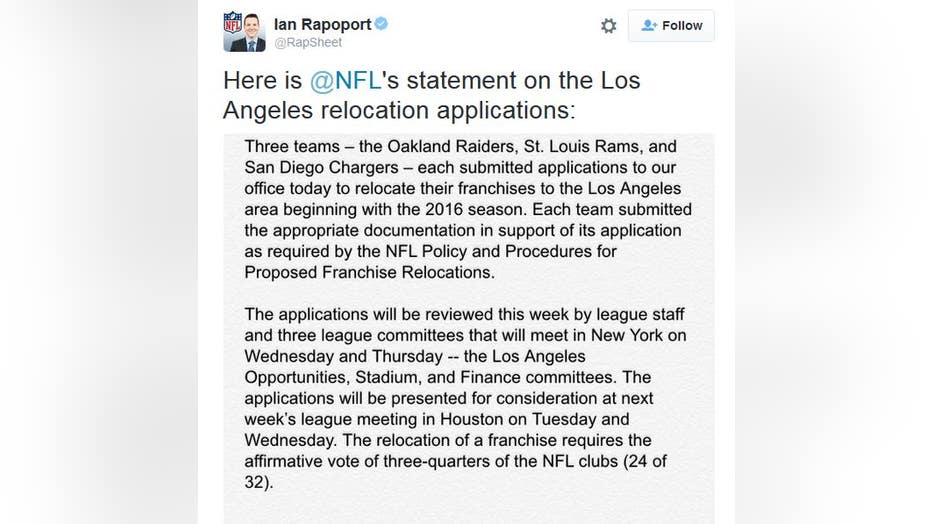