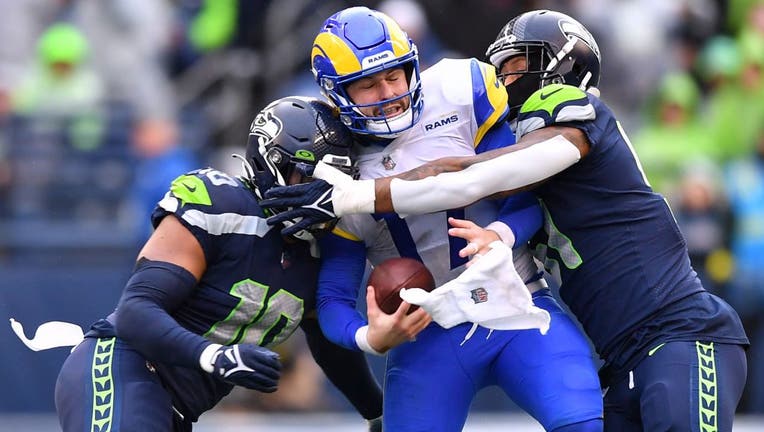 SEATTLE, WASHINGTON - JANUARY 08: Baker Mayfield #17 of the Los Angeles Rams is sacked by Bruce Irvin #51 and Uchenna Nwosu #10 of the Seattle Seahawks during the third quarter at Lumen Field on January 08, 2023 in Seattle, Washington. (Photo by Jane

SEATTLE - Within minutes of the Seattle Seahawks winning to maintain their playoff hopes, the video boards inside Lumen Field flashed a message:

For the Seahawks, that became "thank you Lions" several hours later after Detroit helped send Seattle back to the postseason.

Seattle will be the No. 7 seed in the NFC playoffs after beating the Los Angeles Rams 19-16 in overtime on Sunday and getting the help it needed with Detroit beating Green Bay later Sunday night in the final game of the NFL regular season.

The Seahawks will face division foe San Francisco on Saturday in the wild-card round of the playoffs, but only after several hours of stress that started with their own nail bitter against the Rams.

Jason Myers kicked a 32-yard field goal midway through overtime to give Seattle (9-8) the victory after he hit the upright from 46 yards on the final play of regulation.

But given another shot in overtime, the Pro Bowler connected on his fourth field goal of the game and the Seahawks’ playoff chances stayed alive long enough for Detroit to help.

"You just do your part. That’s what I’ve been preaching to the guys the last couple of weeks," Seattle safety Quandre Diggs said. "We do our part and let the rest handle itself. ... If we’re in or we’re not, I think we can hold our head up high and understand we did some great work and we did what a lot of people didn’t expect us to do."

Seattle (9-8) concluded an overachieving regular season with two straight victories and a winning record, defying preseason prognosticators who thought the Seahawks could be among the worst teams in the league.

Coach Pete Carroll had a different perspective. In his view, the Seahawks should not have been in the position of needing help to make the postseason.

"Where you all thought we did all these cool things and all these things, I didn’t feel like that. I feel like we missed our chance," Carroll said. "We had five, six games there that could have gone one way or another and then we wouldn’t be here talking about what’s going on with Detroit right now."

Geno Smith had a shaky performance, throwing two interceptions to Jalen Ramsey. But he threw a 36-yard touchdown pass to Tyler Lockett early in the third quarter and made several key lays late to put Seattle in position to win.

Smith finished 19 of 31 for 214 yards and rookie Kenneth Walker III rushed for 114 yards for Seattle.

Baker Mayfield was 13 of 26 for 147 yards and was intercepted on the only possession of overtime for the Super Bowl champion Rams (5-12), whose nightmarish, injury-riddled title defense mercifully came to an end.

Seattle went three-and-out to start the extra session, but the Rams failed to capitalize. On Los Angeles’ second play, Mayfield had Van Jefferson wide open deep but underthrew him slightly, allowing Diggs to sprint across the field for the pick. It was the first turnover of the game for the Rams.

"That dude was wide open. In my mind I was thinking the worst," Diggs said. "I felt like I was 25 again running and jumping in the air. It was one of those plays they drew it up perfect, got us in the coverage they wanted and I was going to go out and make a play."

Smith immediately hit Lockett for a 17-yard completion and Walker had a 20-yard run to move Seattle into field goal range. Given a second chance at a game-winner, Myers came through with his 34th field goal in 37 tries this season.

It was an underwhelming performance in a must-win game by the Seahawks, especially in the first half. Smith was intercepted by Ramsey on the first play of the game and Seattle didn’t reach the end zone until his TD toss to Lockett after halftime.

Cam Akers rushed for 104 yards for the Rams to conclude the season with three straight 100-plus-yard games.

Rams coach Sean McVay avoided all questions after the game that centered on his future in Los Angeles. He said on Friday he’s interested in a future broadcasting career but remains focused on the Rams.

"I’m not thinking about that right now. Nothing’s changed from kind of where we left things off on Friday," McVay said.

Rams safety Russ Yeast suffered a pulmonary contusion and was taken to a hospital for further examination. McVay said Yeast was stable and expected to spend the night in Seattle.

Lockett became the second player in Seahawks history with four consecutive seasons of at least 1,000 yards receiving, joining Hall of Famer Steve Largent. Lockett topped the 1,000-yard mark on his TD catch early in the second half.

Rams linebacker Bobby Wagner was an opponent at Lumen Field for the first time in his career. Unlike Russell Wilson’s return in Week 1, which was filled with boos, Wagner was greeted with a standing ovation from fans when he walked out for the coin toss as the only Rams representative. Seattle fans chanted "Bobby!" as he stood at midfield giving hugs to some of his former Seattle teammates.

Wagner finished with seven tackles and one tackle for loss.