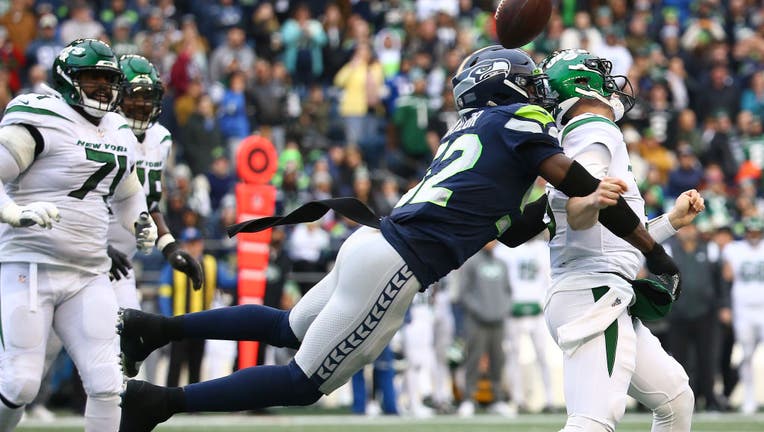 SEATTLE, WASHINGTON - JANUARY 01: Darrell Taylor #52 of the Seattle Seahawks strip sacks Mike White #5 of the New York Jets during the first half of the game at Lumen Field on January 01, 2023 in Seattle, Washington. (Photo by Lindsey Wasson/Getty Im

SEATTLE - Geno Smith finished off a very personal sweep. And by him doing so, a season that started with low expectations for the Seattle Seahawks will reach Week 18 with the playoffs as a real possibility.

Seattle (8-8) snapped a three-game losing streak and ensured its Week 18 matchup against the Los Angeles Rams will be meaningful. The Seahawks must win and hope for a loss or tie by Green Bay against Detroit to reach the postseason.

Smith also completed a three-game sweep of his former employers this season with previous wins over the Chargers and Giants. The last piece of the trio was getting the best of the Jets where he was drafted and spent two seasons as a starter.

"Honestly it doesn’t mean anything outside of the fact we gave ourselves another chance to go to the playoffs," Smith said. "I’m actually grateful for being drafted into the NFL by the Jets and although things weren’t perfect there, there were some good times."

Smith’s numbers weren’t flashy, but he did enough to make the final week of the regular season relevant. Smith finished 18 of 29 for 183 yards and was especially good in the first half. Smith threw touchdowns of 12 yards to Colby Parkinson on the first possession of the game and 7 yards to Tyler Mabry early in the second quarter.

Parkinson’s TD catch was the first time Seattle had led since Week 13 against the Rams. Mabry’s touchdown was the first catch of his career, and his first TD since he was playing for Maryland in college.

"It was great to get out ahead, great to play with the lead," Seattle coach Pete Carroll said. "You know it’s fun to be in that position and the guys held on great."

Smith also hit big throws of 29 yards to Noah Fant and a 41-yard catch-and-run to DeeJay Dallas where Smith backhanded the pass scrambling away from pressure. The throw to Fant led to one of Jason Myers’ three field goals and the clever flick to Dallas led to Mabry’s touchdown, both coming in the first half.

The running game helped, especially with Tyler Lockett limited playing with a broken bone in his left hand and DK Metcalf held to one catch for 3 yards. Walker had the second-best game of his rookie season, including a 60-yard run on the first play of the game, and Seattle’s 198 yards rushing was third-most this season.

"That’s something we harped on during the whole season ... and so when we’re productive with it, they trust us more," Walker said.

Meanwhile, New York’s playoff hopes ended with a thud after its fifth straight loss and extended the longest active playoff drought in the NFL to a franchise-record 12 consecutive seasons. The Jets (7-9) last reached the postseason in 2011 and will finish with a losing record for the seventh straight season.

Mike White returned at quarterback for the Jets after missing two games with fractured ribs, but offensive success was fleeting for the Jets. White was 23 of 46 for 240 yards. He also threw two interceptions, including a careless throw on New York’s first possession that was picked off by Seattle safety Quandre Diggs.

New York was especially bad in the second half while picking up just six first downs — four of those on its final drive — and went three-and-out on three straight possessions. White was sacked four times and the Jets failed to run an offensive play inside Seattle’s 20 the entire game.

"No one is hurting more than the people in that locker room, especially me," Jets coach Robert Salah said. "But at the same time, I know it’s hard to see the light at the end of the tunnel, but there’s still a lot of really cool things to look at from this season. But right now, it stings."

Seahawks: Starting middle linebacker Jordyn Brooks was lost to a right knee injury suffered midway through the second quarter making a tackle along the sideline. Brooks had to be carted back to the locker room. Carroll did not have an update after the game other than Brooks was already getting an MRI done. ... Offensive guard Phil Haynes also left in the second half with a sprained ankle. ... Right tackle Abraham Lucas and safety Ryan Neal were both inactive due to knee issues.

Jets: Lost safety Lamarcus Joyner after aggravating a hip injury in the first quarter. Joyner had missed the previous two games with a hip issue. ... Starting right guard Nate Herbig was inactive because of an ankle injury.

Jets: At Miami next weekend to end the season.