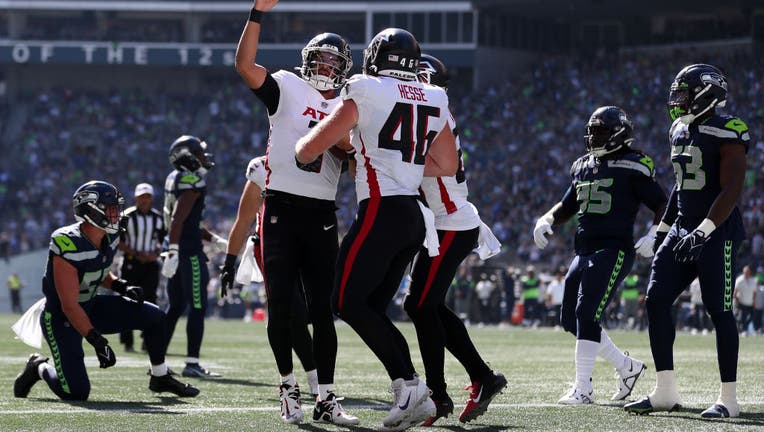 SEATTLE, WASHINGTON - SEPTEMBER 25: Marcus Mariota #1 of the Atlanta Falcons celebrates after scoring a touchdown against the Seattle Seahawks with Parker Hesse #46 during the first quarter at Lumen Field on September 25, 2022 in Seattle, Washington.

SEATTLE - In the aftermath of a narrow loss, another debatable decision from Seattle Seahawks coach Pete Carroll quickly became a focal point.

Seattle played it safe and likely paid the price.

There were several other opportunities for the Seahawks to find chances to score in their 27-23 loss to Atlanta on Sunday. But Carroll’s decision to kick a field goal while tied at 20-20 late in the third quarter and facing fourth-and-2 inside the Atlanta 10 became a debatable point.

"We were just kinda mixed up a little bit there, so it was probably best to take the points," Seattle quarterback Geno Smith said. "We didn’t want to just try and force it there so we just took the timeout, kicked the field goal and gave ourselves the lead."

The Seahawks lost their second straight and that one choice did not determine the outcome. Seattle’s defense was a sieve, giving up big plays in the pass game in the first half before watching Cordarrelle Patterson run wild in the second half.

But Seattle’s defensive issues were apparent before Carroll’s decision to have Jason Myers attempt a 25-yard field goal with 3:11 left in the third quarter. Touchdowns were likely going to make the difference.

On third-and-2 from the Atlanta 7, Smith threw incomplete trying to hit DK Metcalf, who had made an acrobatic 18-yard touchdown catch in the first half. Seattle’s offense remained on the field initially before Carroll called timeout.

When the timeout ended, Myers was on the field and the debate over the decision started.

"I don’t really want to talk about it too much. I don’t want to tell everyone what I’m thinking. But we were going for it and that was the mentality, and then we got a little screwed up and needed time to talk about it," Carroll said.

"I was hoping we would not be in fourth-and-whatever that was, two-and-a-half or whatever. I thought we were going to be in a better situation going for it. I was thinking about going for it possibly. Guys on the field weren’t ready, so we had to call timeout."

According to Stathead.com, the Seahawks had 32 previous occasions under Carroll when they faced a fourth-and-1 or fourth-and-2 inside the opponent’s 20. Thirteen times, the Seahawks went for it and were successful. Nine times they were stopped. Eight times Seattle kicked a field goal and twice there was a penalty.

Despite the conservative decision, the Seahawks still had two fourth-quarter possessions with a chance to take the lead. Both were impacted by penalties, most notably the final drive where Damien Lewis’ holding call erased a screen pass to Rashaad Penny that would have given Seattle a first down at the Atlanta 10.

The holding call was followed by a sack and Smith was intercepted on fourth-and-18 from the Atlanta 38. The Falcons ran the final 1:17 off the clock.

"We still have to try to find ways to overcome it. Especially in that situation with the game on the line, we’ve got to figure it out," Smith said.

The game was stopped with 6:42 left in the fourth quarter for about five minutes, apparently because of a drone flying in the area around Lumen Field. Players were sent to the sidelines before the game resumed.

There was also a brief delay because of a drone during Saturday night’s game between Washington and Stanford across town.

Seattle was without three of its top cornerbacks as Artie Burns, Sidney Jones and Justin Coleman were all inactive. Burns was working back from a groin injury but neither he nor Jones had any injury designation on the final injury report for the week. Coleman had missed last week with a calf injury.

Seattle also lost backup running back and special teams standout Travis Homer on the first possession of the game. Homer had a 7-yard carry, but left with a rib injury and was ruled out.

Falcons: Atlanta returns home for the first time since Week 1 to face Cleveland.

Seahawks: Seattle plays its next two on the road beginning next Sunday at Detroit.