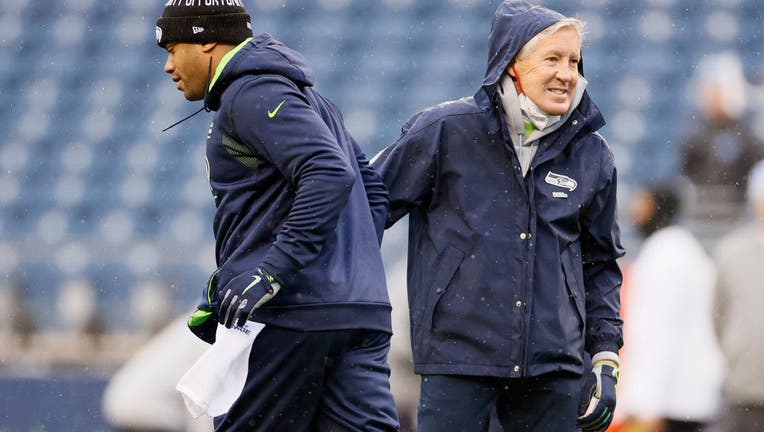 SEATTLE, WASHINGTON - JANUARY 02: (L-R) Russell Wilson #3 and head coach Pete Carroll of the Seattle Seahawks on the field for warm-ups before the game against the Detroit Lions at Lumen Field on January 02, 2022 in Seattle, Washington. (Photo by Ste

SEATTLE - Now that the chances of the postseason are gone, the debate has switched toward the future of the Seattle Seahawks.

Was this season a one-year aberration? Or was it several years of minor — and major — missteps finally catching up with the franchise and a more significant change is needed?

Whatever the answer ends up being, there is a strong chance Seattle’s home finale on Sunday against the Detroit Lions is the last time some of the Seahawks’ core pieces are together on their home field.

Seattle coach Pete Carroll believes this year is an outlier and a "restart" is needed rather than a "rebuild." But there’s no guarantee that if Seattle’s ownership decides for a wholesale change that Carroll will be the one engineering those changes.

The same goes for quarterback Russell Wilson and linebacker Bobby Wagner, which makes for a strange atmosphere surrounding Sunday’s game.

For his part, Wilson at least acknowledged this week that any changes the Seahawks (5-10) make could include him, while stating his desire to stay.

"For me personally, I hope it’s not my last game (in Seattle), but at the same time, I know won’t be my last game in NFL," Wilson said.

While Seattle’s future seems to be in limbo, the Lions feel (2-12-1) somewhat optimistic about their direction, especially with how they’ve played in recent weeks.

Two weeks ago was the thorough home pummeling of Arizona, at the time the leaders of the NFC West. Last week, Detroit had its chances against Atlanta despite playing without starting quarterback Jared Goff and leading rusher D’Andre Swift. Tim Boyle’s pass for Kalif Raymond in the end zone was intercepted by Atlanta with 33 seconds left of a 20-16 loss.

Swift is expected to return this week after missing four games with a shoulder injury, but Goff is uncertain and Boyle could make his second straight start. Boyle was 24 of 34 for 187 yards, one touchdown and the late interception against the Falcons.

"I felt like I saw the field really well. I felt like I was making quick, almost at times too quick decisions," Boyle said. "It didn’t hurt me, but there were opportunities if I were a little bit more patient."

MORE THAN A PENNY

Rashaad Penny continues to make a strong case that he should be part of Seattle’s plans going into next season even though he’s about to become a free agent.

Penny rushed for a career-best 137 yards three weeks ago against Houston, and followed up with 135 yards rushing last week against Chicago. What has been impressive is Penny’s ability to break out big runs despite his limited carries. He has six runs of 15 or more yards this season, five coming in the past three games.

"You have to be thrilled about what he looks like. He has been active, tough, creative, explosive, so we just want to go play football again," Carroll said.

The Lions have gone for it on fourth down more than any other team in the NFL, and they’re on the verge of setting an NFL record. This year alone, the Lions have attempted a league-high 36 fourth-down attempts, just three off the record set by the New England Patriots in 1995.

Last week, the Lions went 3 for 4 on fourth down, with their only failed conversion a Hail Mary at the end of the first half. For the season, the Lions are converting 50% of their fourth-down attempts, ranking 17th in the league.

Wagner is trying to set a mark for tackles in a season that’ll be tough to match in the future.

He leads the league with 170 tackles and has already surpassed the franchise record he set in 167 in 2017. According to the Seahawks, Wagner needs six tackles to post the most by any player in the league since 2000.

Wagner would need two big games, but it’s not completely out of the question he could get to 200 by the end of the season.

The Lions haven’t won a game on the West Coast in 10 years. They’re 0-7 in their last seven games played in the Pacific time zone.

Campbell brushed off any travel concerns but acknowledged that Seattle — where the Lions haven’t won since 1999 — presents a unique challenge to the visiting team.

"That’s a tough place to play. It has been for years," Campbell said. "It’s a tough environment. You can’t hear yourself think, and they’ve been a relentless group offensively and defensively."