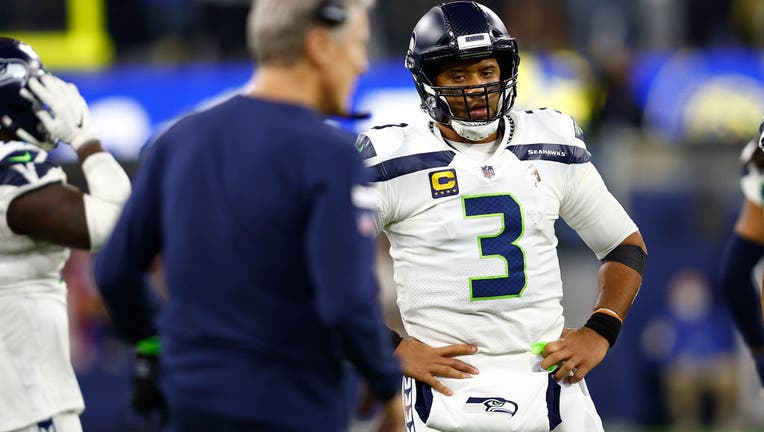 INGLEWOOD, CALIFORNIA - DECEMBER 21: Russell Wilson #3 of the Seattle Seahawks looks on during the second half of a game against the Los Angeles Rams at SoFi Stadium on December 21, 2021 in Inglewood, California. (Photo by Sean M. Haffey/Getty Images

SEATTLE - The realization of what the season has become seemed to sink in for always optimistic Pete Carroll.

Barring a confluence of unexpected results playing out over the next three weeks, it seems almost certain the Seattle Seahawks won’t be going to the playoffs for only the third time in Carroll’s tenure.

"We will overcome the issues and get back to playing and focus on the things that make us have a chance, by practicing well, studying hard, caring and loving this game," Carroll said. "We’re going to do everything we can to get every single drop out of it as we go down the stretch here."

That stretch of what looks to be meaningless games for Seattle begins Sunday with hosting the Chicago Bears. It’s the conclusion of a brutally short week for the Seahawks (5-9) following their rescheduled loss to the Los Angeles Rams last Tuesday night and limited recovery time before facing the Bears.

But it’s also the week during which reality is likely setting in for the Seahawks. Seattle is not officially eliminated from the postseason, but could be by kickoff Sunday. The loss to the Rams ended a realistic path to the postseason for a franchise whose minimum expectation is reaching the playoffs.

Only once since the arrival of Russell Wilson and Bobby Wagner in 2012 have the Seahawks played a meaningless regular season game where there wasn’t some type of postseason implications involved.

"You’re looking for ways to get better toward the end and try to figure out how to close the season off the right way," Wagner said.

The Bears (4-10) are in the same position of playing out the final few weeks with nothing at stake. Chicago being in this position was probably expected, unlike the fall of the Seahawks being among the more unexpected results league wide.

But while there is handwringing about Seattle’s future, the final few weeks were set up as an opportunity for Chicago to learn more about its rookie quarterback and how much growth Justin Fields can show.

This week, though, the Bears are starting third-stringer Nick Foles.

Fields suffered a sprained ankle in the loss to Minnesota and said he intended on playing against Seattle. But Matt Nagy and the Bears decided against that, pushing Foles into action with Andy Dalton — back from the reserve/COVID-19 list this week — now sidelined with a groin injury.

While the Seahawks had their game against the Rams pushed back two days, it did allow time for the coaching staff to start prepping for the Bears. Seattle had virtual meetings Wednesday, but Carroll said the coaching staff already had the game plan in place for Chicago. He said the team didn’t lose out on any preparation time from that standpoint.

"The groundwork for stuff put us back in a normal position as far as planning," Carroll said.

Chicago defensive end Robert Quinn has been a familiar thorn for the Seahawks for many seasons. In 12 career games against the Seahawks, Quinn has 14 sacks, 38 total tackles, 21 quarterback hits and two forced fumbles.

Quinn is second in the NFL this season with 16 sacks and had two in each of the past two games. He needs three over the final three games to match his career high of 19 set in 2013.

The Seahawks continue to show weekly that their defense is worthy of being considered among the better units in the league. Some of the numbers still lean heavily in the other direction — namely total yards allowed per game and yards passing allowed — but Seattle ranks highly in several key defensive categories.

The Seahawks are seventh in third-down defense, tied for fourth in red-zone defense and have improved to fourth in the league in scoring defense allowing 20.1 points per game. Seattle has held nine straight opponents to 23 points or less.

The matchup with Chicago means a return to Seattle for a handful of players that were key starters during their tenures with the Seahawks.

Most notable is tight end Jimmy Graham, who played in 43 games over three seasons with Seattle and had 170 receptions and 18 touchdown catches.

"Jimmy was a blast. I loved coaching him," Carroll said. "He was really fun to play with. Huge expectations, that was always fun to deal with."

Two others who had significant roles in Seattle and are now with the Bears are right tackle Germain Ifedi and linebacker Bruce Irvin. Both were first-round picks for the Seahawks. Ifedi started 60 games in four seasons with Seattle, while Irvin also played his first four seasons (2012-15) and the 2020 season with the Seahawks.