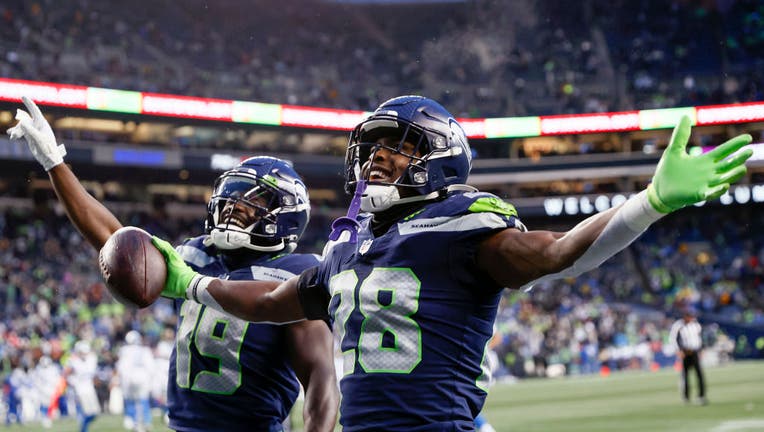 SEATTLE, WASHINGTON - JANUARY 02: Ugo Amadi #28 of the Seattle Seahawks celebrates his interception with Penny Hart #19 during the fourth quarter against the Detroit Lions at Lumen Field on January 02, 2022 in Seattle, Washington. (Photo by Steph Cha

SEATTLE - For a time this season, it looked like the partnership between Shane Waldron and the Seattle Seahawks wasn’t working.

The offense that was supposed to evolve under Waldron’s watch as offensive coordinator and accentuate the skills of Russell Wilson, DK Metcalf and others was failing to meet expectations.

"A lot of different inconsistencies showed up throughout the year," Waldron said this week.

Something changed in the past month, however, whether it was the team understanding the offense better, key players getting healthy, easier opponents or a combination of all of that. Seattle has moved closer toward the type of offense everyone expected in Waldron’s first season going into Sunday’s season finale in Arizona.

The offense that showed up in Week 1 in Indianapolis and then disappeared for the better part of three months has slowly come back into focus. And with it seem to be assurances Waldron will get a second season in charge of the offense if he wants the challenge.

"I don’t think that we missed the opportunity to grow, get the messaging across, the principles, the philosophies of what we are trying to do," coach Pete Carroll said. "I think that you can see there are enough illustrations in our play this year that you can see exactly where we are heading."

Carroll said he wouldn’t assign a grade to Waldron’s first season with the Seahawks, but an incomplete might be the best option. Seattle played without Wilson for the first time in his career. He missed 3 ½ games and admittedly returned before he was fully healthy following finger surgery.

Leading rusher Chris Carson didn’t play after Week 4 due to a neck injury. Rookie second round pick Dee Eskridge was injured in Week 1 and never found a way to become a regular part of the offense.

There were clear obstacles that led to the inconsistencies Waldron noted.

"Bringing a whole new system to 11 different players, I will say, is very challenging," Metcalf said. "Just the ground that we made up during the season and not falling apart completely but keeping our composure and continuing to compete and fight every game is something that speaks volumes, not about just Shane, but about this team. We’re going to continue to fight."

Waldron was expected to bring creativity and a little of what worked for Seattle’s division rival down in Los Angeles when he was hired.

While some of the ingenuity showed up at times, there was also moments of frustration. Seattle looked clunky and disorganized, especially in the games immediately after Wilson returned from his finger injury, when the Seahawks were shut out in Green Bay, managed 13 points at home against Arizona and 15 at Washington.

The past month has provided a glimpse of the style and substance the Seahawks were hoping for. Seattle has scored 30 or more points in three of the past five games, topping 400 yards total offense twice during that span.

For the season, the stats entering the final week reveal the inconsistencies.

Seattle’s been exceptional at protecting the ball, ranking second in turnovers. They’re third in red-zone efficiency, 11th in yards per play, 12th in yards rushing and in the middle of the pack at 17th in points per game.

Seattle is hoping this final month is a launching point into next season. There are many personnel questions still to be answered for next year, but a good performance against the Cardinals would reinforce the feeling Seattle is headed in the right direction.