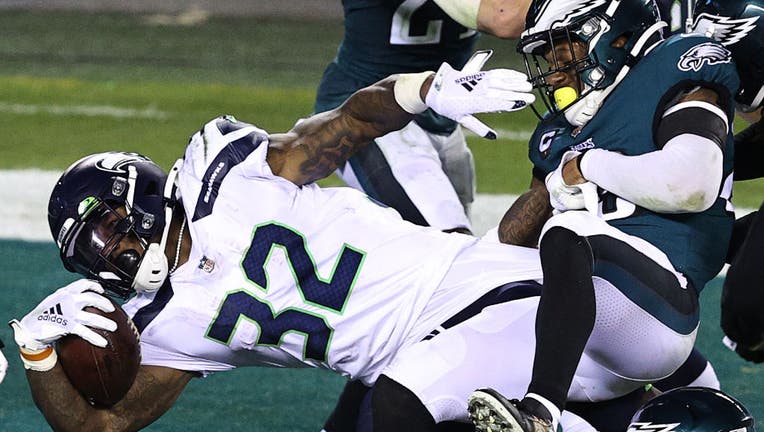 PHILADELPHIA, PENNSYLVANIA - NOVEMBER 30: Chris Carson #32 of the Seattle Seahawks scores a touchdown against Rodney McLeod #23 of the Philadelphia Eagles during the second quarter at Lincoln Financial Field on November 30, 2020 in Philadelphia, Penn

PHILADELPHIA - DK Metcalf again made the Philadelphia Eagles regret passing him up in the draft.

Metcalf caught 10 passes for 177 yards, Russell Wilson threw for 230 yards and a touchdown and the Seattle Seahawks beat the Eagles 23-17 on Monday night.

The Seahawks (8-3) moved one game ahead of the Rams in the NFC West. The Eagles (3-7-1) fell a half-game behind the Giants and Washington in the woeful NFC East.

Carson Wentz didn’t cede many snaps to backup Jalen Hurts but had another rough game. He was 25 of 45 for 215 yards, two TDs and one interception.

Seattle’s defense entered the game allowing the most yards in the NFL and most yards passing but held Philadelphia’s inept offense to 250 yards.

Metcalf was on the board when the Eagles took J.J. Arcega-Whiteside in the second round with the 57th pick in 2019. Arcega-Whiteside has 12 career catches and was a healthy inactive before landing on the COVID-19 list. Metcalf, who was the final pick of the second round, had the best game of his rookie year in Seattle’s playoff win at Philadelphia last season and again showed why he’s one of the best receivers in the NFL.

Metcalf’s 52-yard catch on third-and-13 set up Wilson’s 1-yard TD pass to David Moore that gave the Seahawks a 7-0 lead.

Chris Carson bullied his way through Philadelphia’s defense for a 16-yard run to make it 14-0.

The Eagles didn’t get a first down until Wentz ran for 20 yards with under five minutes left in the first half. Wentz scrambled for 13 yards on third-and-5 to keep the drive going and tossed a 3-yard TD pass to Dallas Goedert to cut it to 14-6 at halftime. Jake Elliott missed the extra point wide left.

After a holding call on Cedric Ogbuehi negated a 17-yard TD run by Carlos Hyde, Myers connected from 33 yards. He hit another one from 39.

Richard Rodgers caught a tipped ball on a desperation heave by Wentz for a 33-yard TD in the final minute.

Eagles coach Doug Pederson passed up a field goal down 11 and went for it on fourth-and-4 from the Seahawks 15. Wentz’s pass went straight to Seattle’s Quandre Diggs as Goedert turned the other way on the route.

The Eagles got a huge stop on Seattle’s opening series. After a pair of unsportsmanlike conduct penalties helped the Seahawks reach the 3, Derek Barnett stuffed Moore for a 5-yard loss on fourth down from the 2.

Wilson is 6-0 against the Eagles and the Seahawks have won seven in a row in the series.

Hurts took the snap on two plays. He completed a 6-yard pass to Alshon Jeffery on one and handed off on the other. Wentz was split wide on the running play and on the sideline for the pass.

The Eagles went three-and-out on their first five drives.

Both teams were missing their starting right tackle.

Seattle’s Brandon Shell was inactive because of an ankle injury. Ogbuehi took his spot.

Philadelphia’s Lane Johnson is sidelined for the rest of the season with an ankle injury. Matt Pryor started in his place.