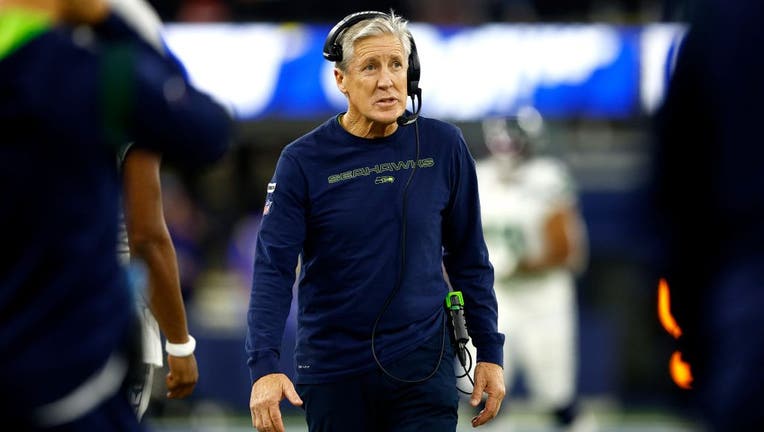 INGLEWOOD, CALIFORNIA - DECEMBER 21: Head Coach Pete Carroll reacts of the Seattle Seahawks looks on during the first half of a game against the Los Angeles Rams at SoFi Stadium on December 21, 2021 in Inglewood, California. (Photo by Sean M. Haffey/

Carroll is fully vaccinated and has mild symptoms. He will remain at home while he recovers and will take part in team meetings virtually until he can return to the team.

The Seahawks went the entire 2020 season without a single player testing positive for the virus. A December surge in positive cases forced Seattle to be short-handed for a rescheduled game against the Los Angeles Rams. Only two players that were a part of last year's roster were unvaccinated.

While the NFL and NFL Players' Association agreed to suspend COVID-19 protocols in March, individuals who test positive are still required to isolate away from the team for five days, which is the current guideline from the CDC as well.

The three will likely collaborate to split up Carroll's duties in his absence.

The Seahawks activated rookie pass rusher Tyreke Smith from the physically unable to perform list. He missed the first three practices of training camp while working back from a hip injury.

Seattle also signed rookie defesive tackle Antonio Valentino to fill their lone active roster spot. Valentino went undrafted out of the University of Florida this spring and spent time with the New York Giants this summer. He takes the roster spot vacated by the retirement of guard J.R. Sweezy, who signed a one-day contract to retire with Seattle last week.