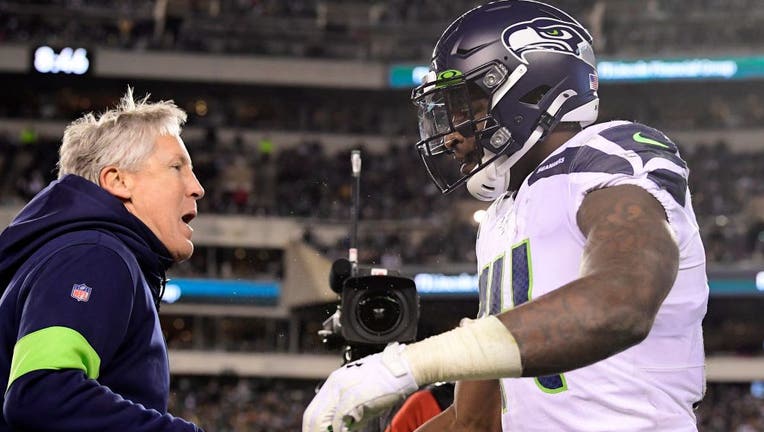 PHILADELPHIA, PENNSYLVANIA - JANUARY 05: D.K. Metcalf #14 of the Seattle Seahawks is congratulated by head coach Pete Carroll after his touchdown in the third quarter of the NFC Wild Card Playoff game against the Philadelphia Eagles at Lincoln Financ

"It's a decision that he had to make. And you know, we missed him," Carroll said after mini-camp wrapped up on Thursday afternoon. "He had done a nice job and contributed being a part of everything that we had done. And then, you know, he's not here. So I can't say much for what he hasn't done here. But we'd love to have him with us."

Metcalf, 24, is set to enter the final year of his rookie contract with the Seahawks. In three seasons, he's caught 216 passes for 3,170 yards and 29 touchdowns. The receptions and yards are the most ever in team history for a player over his first three seasons. The 29 receiving touchdowns are second to only Daryl Turner.

Metcalf is set to earn $3.9 million in the final year of his contract. However, the top of the wide receiver market has jumped significantly this offseason with Tyreek Hill ($30 million/year), Davante Adams ($28 million/year), and college teammate A.J. Brown ($25 million/year) getting new contracts. Metcalf's numbers are deserving of joining that echelon as well. He elected to stay away from mini-camp without a new contract on the table.

"There's been conversations and we're in a pretty kind of standard kind of semi-quiet right now knowing that camp is coming up," Carroll said of the discussions. "These are crucial weeks to get something done. We'll see what happens and hope that we can work something out. We really intended to get that done."

This is the time when the Seahawks typically have completed their big extensions for their star players through the years. Russell Wilson, Bobby Wagner, Earl Thomas and Richard Sherman are among the group of players who saw their new contracts completed in the lead up to, or early in, training camp.

Carroll said that he had wished that Metcalf had shown up for mini-camp. Metcalf is still recovering from his foot surgery this offseason and wouldn't have been able to fully participate anyway.

Metcalf could be fined by the team for his absences. The league's CBA allows for fines of north of $93,000 for missing the mandatory mini-camp. Carroll wouldn't comment on whether the team would seek such fines from Metcalf as they are at the team's discretion.

Metcalf has expresses his desire to stay with the Seahawks earlier this offseason as well. He said on the Club Shay Shay Podcast with Shannon Sharpe in April: "At the end of the day once you sit down and make a grown-man decision, yeah, I want to be in Seattle."

The Seahawks and Metcalf will have seven weeks to get the contract across the finish line before the team reports for training camp in late July. Carroll said Metcalf's absence hadn't dampened his belief the deal will get done.

"No, I'm not less optimistic," he said. No, we've been through this for years, you know. And it's a challenging time. You know, we've had so many high-profile guys that have gone through this process and how's that worked out for us? You know, we figured it out in time. And so Johnny was on it and he's as experienced as you can get at handling this stuff and DK's got great representation and DK is a heck of a kid.

"He's a remarkable person and he's a wonderful player. He has so much to offer the world and I just don't want him to miss this opportunity where we can't figure it out. So we'll do everything we can."