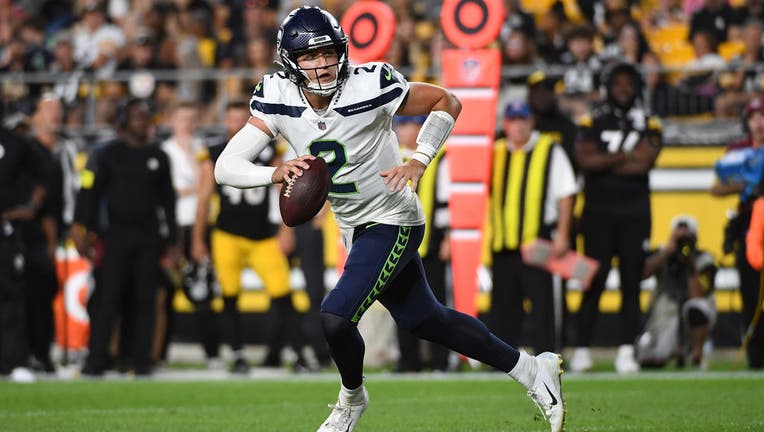 PITTSBURGH, PA - AUGUST 13: Drew Lock #2 of the Seattle Seahawks scrambles out of the pocket in the fourth quarter during a preseason game against the Pittsburgh Steelers at Acrisure Stadium on August 13, 2022 in Pittsburgh, Pennsylvania. (Photo by J

"We had a thing pop up with Drew yesterday," Carroll said after practice on Wednesday. "As it happens, it came out of nowhere. And so obviously, he'll miss this game, but he hasa chance to be back. He's got a five-day window that he's got to take care of and so it's unfortunate. It was his turn to play. to start, but we'll figure it out.

Lock tested positive after practice on Tuesday. He was given the chance to work with the first-team offense throughout the practice as team planned for him to start against the Bears. Geno Smith started the opener against the Pittsburgh Steelers and Lock was going to get his chance against Chicago as the team works its way toward naming a starter for the regular season.

Lock didn't have a great practice and Carroll said he really started feeling bad by the time the practice had ended.

"He was under the weather yesterday," Carroll said. "He barely made it off the practice field. He was just dragging, as it does. We were going to do post-practice work and we said 'no, let's get him out here.' So it hit him. He's had it before already. He's done all of the work to get prepped for it and all that and just so happens, you know, it got him again."

Because of the short turnaround from Saturday's game against the Steelers to tomorrow night's game against Chicago, Carroll wanted to get some extra work in with Lock and starters DK Metcalf, Tyler Lockett, Will Dissly and others in the lead-up to the game as well. So in addition to the missed game time against the Bears, Lock will miss the additional reps with the starters as well.

"He did need them. He did need them," Carroll said. "This week is a screwed up week for a guy to get a bunch of turns and all that and he worked with the ones yesterday and prepped for the game and so that's really all he got. I would have liked to see that happen throughout this little mini week, but we'll see what happens next week. We'll figure it out. But it was important and that's where we were gonna do extra work after practice with DK and with [Lockett] and with [Dissly]. And we just weren't able to do that. So we missed out on that opportunity."

Smith will again start against the Bears with third-string option Jacob Eason – a former University of Washington and Lake Stevens High School product – getting the chance to play in the second half.

"I'm fired up for Geno to go and he had an excellent abbreviated week, had a terrific type ... of day for us, and so he's ready to go," Carroll said. "It'll also give Jake a chance to play a little bit more, obviously, and he'll get a good shot in the second half. Really, he deserves it and he's practiced really well for us so I'm anxious for him to get out there and play some football."

Carroll said they haven't decided whether Lock will get the chance to start next week's preseason finale against the Dallas Cowboys instead.

"Let's see what happens. Don't need to make that decision yet," he said.

Lock can return the roster on Monday after sitting out the CDC recommended five days following his positive test. The finale with the Cowboys is next Saturday in Dallas.

Pete Carroll said that rookie running back Ken Walker III had a "procedure" done to address a hernia issue that surfaced after Saturday's preseason game against the Steelers.

Walker has been away from the team the last two days while seeking treatment.

"He's having a procedure done," Carroll said. "This is not a sports hernia. It's not that. It's not what he's dealing with. Something a little bit different. And we have a chance to get him back quickly."

A "sports hernia" refers to torn or injured muscles in the lower abdomen or pelvic area. A normal hernia is when an internal organ pushes through a weak or ruptured abdominal wall.

Carroll didn't go into specifics of the injury itself beyond it not being a sports hernia. He said he expects that Walker will be back in time for the opener against the Denver Broncos on September 12.

– Defensive end L.J. Collier (elbow) and cornerback Artie Burns (groin) are both expected to return to practice next week.

Collier injured his elbow in the team's mock game practice at Lumen Field on August 6.

"He's really close," Carroll said. "We just think that this game came too fast. Maybe if it was on the weekend, he'd be alright, so we'll get him next week."

Burns pulled up with his injury in practice last week chasing receiver Deontez Alexander in 1-on-1 drills.

"Artie looks pretty good right now," Carroll said. "He's coming around and he's really determined to get back next week. If he doesn't, you know, then it's a big break and he'll for certain make it back and be ready for the opener and all that. But I'd really like him to get it done and he wants to do the same.

Carroll said Burns had made a really strong impression prior to his injury. He had been the starting right cornerback opposite Sidney Jones for most of the first few weeks of training camp.

"Artie was really on it," Carroll said. "He really kind of embraced the press stuff that we've been doing. He's got terrific speed, he can fly and he's good instincts and all that kind of stuff. We were whittling down into our technique principles because he could be a real press corner. He's got that in him to be that guy. And so he was impressive. He was really battling and competing and all that so it's really a shame he missed out on these couple of weeks."