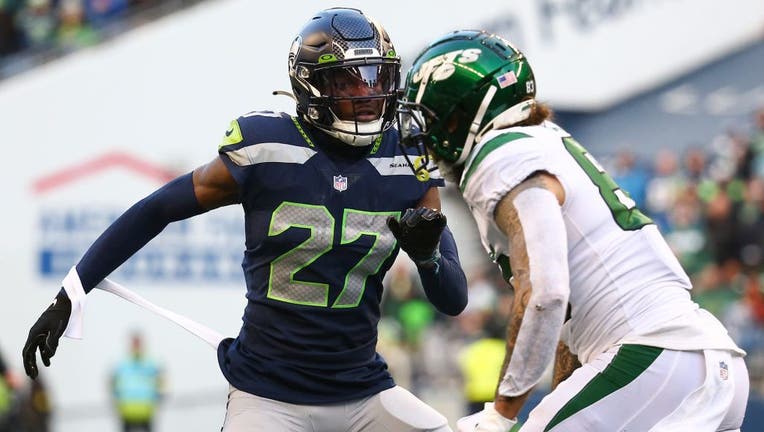 SEATTLE, WA - JANUARY 01: Tariq Woolen #27 of the Seattle Seahawks defends during the second half of the game against the New York Jets at Lumen Field on January 1, 2023 in Seattle, Washington. The Seahawks won 23-6. (Photo by Lindsey Wasson/Getty Im

Seattle Seahawks quarterback Geno Smith is a finalist for the NFL's Comeback Player of the Year award while running back Ken Walker III and cornerback Tariq Woolen are finalists for Offensive and Defensive Rookie of the Year honors, respectively.

The awards are voted on by a panel of 50 media members who cover the NFL regularly and are compiled by the Associated Press. The winners will be announced at the NFL Honors on February 9 ahead of the Super Bowl.

Smith was named to the Pro Bowl in his first season as a starting quarterback in the NFL in seven years after being mired as a backup with the New York Jets, Giants, Los Angeles Chargers and Seahawks. The Seahawks went 9-7 with Smith at quarterback despite wide expectations Seattle would struggle mightily after the trade of Russell Wilson to the Denver Broncos.

Smith took every offensive snap for the Seahawks this year and threw for 4,282 yards with 30 touchdowns and 11 interceptions.

McCaffrey had missed 22 of 33 games over the last two seasons due to shoulder, ankle and hamstring injuries with the Carolina Panthers. This year, McCaffrey played all 17 games split between the Panthers and 49ers and finished the year with 1,139 rushing yards and eight touchdowns on 244 carries and caught 85 passes for 741 yards and five touchdowns.

Barkley also returned to top form after multiple injury-plagued seasons with the Giants that included a torn ACL in 2020. Barkley had 1,312 rushing yards and 10 touchdowns this season in New York.

Walker took over for an injured Rashaad Penny as the start after Week 5 and rushed for 1,050 yards and nine touchdowns for the Seahawks.

Purdy led the 49ers to a 5-0 record after injuries to Trey Lance and Jimmy Garoppolo. He threw for 1,374 yards with 13 touchdowns and four interceptions.

Wilson led all NFL rookies with 83 catches and 1,103 yards receiving along with four touchdowns for the Jets.

Woolen tied for the NFL lead in interceptions with six alongside Minkah Fitzpatrick of the Pittsburgh Steelers, Justin Simmons of the Denver Broncos, and C.J. Gardner-Johnson of the Philadelphia Eagles. Woolen started every game at right cornerback for Seattle despite joining the team as a fifth-round draft pick last spring.

Gardner finished the year with a league-high 20 passes defensed and also recorded 75 tackles and two interceptions with the Jets.

Woolen and Gardner were both named to the Pro Bowl as rookies.

Hutchinson had 9.5 sacks with 52 tackles and three interceptions for the Lions.

Despite the unexpected success of the Seahawks this year, head coach Pete Carroll was not a finalist for Coach of the Year. Kyle Shanahan of the 49ers, Doug Pederson of the Jacksonville Jaguars, and Brian Daboll of the Giants are the finalists for that award.