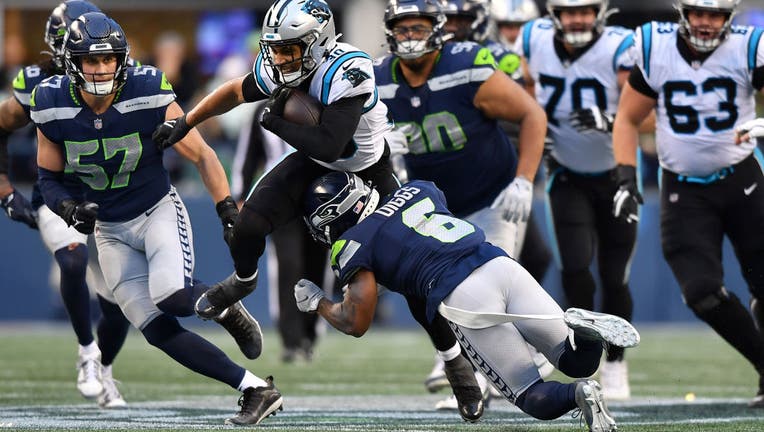 SEATTLE, WASHINGTON - DECEMBER 11: Chuba Hubbard #30 of the Carolina Panthers runs with the ball as Quandre Diggs #6 of the Seattle Seahawks attempts the tackle during the fourth quarter of the game at Lumen Field on December 11, 2022 in Seattle, Was

SEATTLE - For most of this season, the Seattle Seahawks have not faced a day where Geno Smith was unable to make up for whatever issues were on the other side of the ball.

This time was the exception, and it might have been the final blow in Seattle’s hopes of a division title.

"We have to prove it. Nothing I can say up here is going to make us a playoff team," Smith said. "We have to go out there and play."

Smith had statistically his worst game of the year in a 30-24 loss to Carolina. And coupled with Seattle’s inability to slow the Panthers’ run game, the Seahawks were left trying to explain a third defeat in their past four games.

Smith was off target more than any other point this season and Seattle’s defense couldn’t stop from being run over by the Panthers run game.

"It’s frustrating as hell, across the board, top down," Seattle safety Ryan Neal said of the defensive issues. "It’s frustrating. You can see it on my face, I’m frustrated. We have to look at the film and see what’s going on. That’s the only answer I can give you right now."

Smith threw two interceptions and failed to complete at least 60% of his passes for the first time this season. The two picks came in the first half and led to 10 points for the Panthers.

The first interception was on Seattle’s first offensive play. The second came when Seattle (7-6) believed Carolina was offside and had a free play. But no flag was thrown and Smith’s risky pass into coverage was nabbed by C.J. Henderson.

"The reason we snapped the ball is because they jumped offsides," Smith said. "That’s one where we have to learn from it. Can’t make excuses. It happened."

Despite Smith’s mistakes and offensive limitations with top two running backs Kenneth Walker III and DeeJay Dallas out due to injuries, it was still just a 20-17 Carolina lead into the early stages of the fourth quarter.

That is when Seattle’s continued inability to stop the run stepped into the spotlight.

Twice in the past three games, the Seahawks were simply run over. This time, it was a trio of Carolina running backs wearing down Seattle with a demoralizing fourth-quarter drive that was almost all accomplished on the ground and capped by what proved to be the clinching points on Raheem Blackshear’s 8-yard touchdown run with 6:57 left.

Eight of the 10 plays on the drive were runs, chewing up 68 of the 74 yards gained. Carolina finished with 223 yards rushing and was the seventh team this season to top 150 yards rushing against Seattle.

"We had to finish the game. We had a few chances, and we weren’t able to get it together enough to get it done," Seattle coach Pete Carroll said. "They ran the ball really well in the fourth quarter. We respected them that they would try to do that, and when they went to it, we couldn’t get off the field."

Seattle was short-handed on its defensive line, which didn’t help the problems stopping the run. Shelby Harris was an unexpected inactive after waking up sick Sunday morning. Al Woods injured a heel late in the first half and didn’t return, taking two of Seattle’s starters and best run defenders off the field.

The Panthers had 145 of their 223 yards rushing in the second half.

"Those are two heavy dudes up front we were relying on," Carroll said.

And there’s little time to try and make corrections. Seattle hosts San Francisco on Thursday night and a 49ers win will clinch the NFC West title.

"The biggest thing is that you can’t let this game linger in your head," Seattle wide receiver Tyler Lockett said. "You just got to be able to let it go and move on."

Carolina now controls its destiny in the division. The Panthers beat the Bucs earlier this season and have one game remaining against Tampa Bay. If Carolina wins its last four games, it wins the division.

Seattle went a surprising 0-4 against the NFC South this season. Seattle lost at home to Atlanta and Carolina, lost at New Orleans and fell to Tampa Bay when the teams met in Germany.

Seattle lost DT Al Woods late in the first half to a heel injury. That loss was magnified with DE Shelby Harris missing the game due to illness, leaving the Seahawks without two of their better run stoppers. Carolina played without S Xavier Woods due to a knee injury.