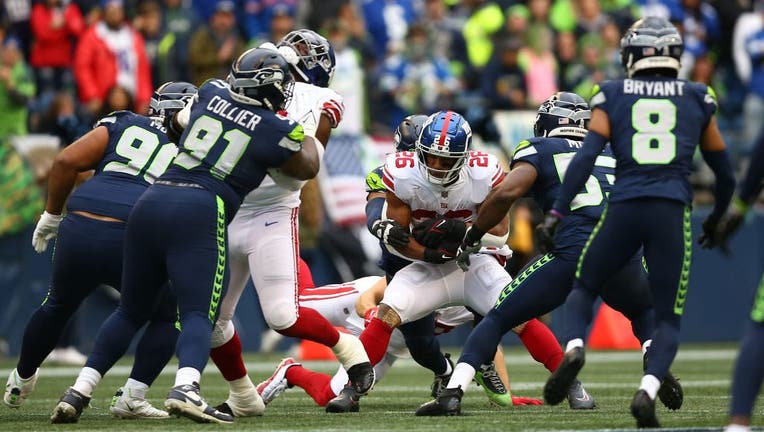 SEATTLE, WASHINGTON - OCTOBER 30: Saquon Barkley #26 of the New York Giants runs against the Seattle Seahawks during the second half at Lumen Field on October 30, 2022 in Seattle, Washington. (Photo by Lindsey Wasson/Getty Images)

RENTON, Wash. - The Seattle Seahawks keep stacking wins on top of each other as a three-game winning streak has carried them to a 5-3 record and a first place spot in the NFC West.

Now that the defense is able to effectively complement the performance of the offense, the Seahawks look like a legitimate playoff team. And with a relatively weak schedule the rest of the way, Seattle has a chance to be a double-digit win team again this season.

"If you look at the last three weeks numbers, you know, we've really shifted gears," head coach Pete Carroll said of the defensive shift. "The running game is better, the pressure on the quarterback is better, pass defenses are all up, the sacks are going in the opposite direction of where they were. So there's a lot of really positive things happening and we're just trying to build and keep going."

Geno Smith is still playing fantastic football as well with two more touchdown passes against the New York Giants on Sunday. Additionally, Smith had two more would-be touchdowns that were dropped by Tyler Lockett and Marquise Goodwin. Smith is continuing to play as a top 10 quarterback this season for Seattle and could be a fringe contender in the MVP discussion based depending on how the second half of the season plays out.

"I’m not surprised by the fact that he’s as accurate as anybody is," Carroll said of Smith, whose 72.7 completion percentage is best in the NFL. "Look at him, almost every throw has a chance. He’s had very few throws that he’s had to throw away, that he threw poorly, or threw into challenged areas. There have been a couple, maybe three, four, or five in eight games. I don’t remember that kind of accuracy. Honestly, I don’t remember seeing guys that sharp, but he has done it."

– Center Austin Blythe sprained his knee in the win over the Giants on Sunday. While he did return to action after the initial injury, Kyle Fuller finished the game at center for Seattle.

"He’s a little sore today. I can’t tell what it’s going to be for the week," Carroll said.

Joey Hunt is on the practice squad and would be an option to call-up for depth should Blythe be unavailable next Sunday against the Arizona Cardinals.

– Wide receivers DK Metcalf (patella tendon) and Tyler Lockett (hamstring/oblique) both played the entirety of the game against the Giants despite their ailments.

"It was a real boost. It was a real bonus for us," Carroll said. "We didn't know that going into the week (on Metcalf). Middle of the week we didn't know. We didn't really know until Friday. And then we didn't know until Saturday until after he had worked out and showed how he could do. He was confident that he was going to be able to make it. He was saying it but we just were hesitant to follow his lead to tell you the truth. And we were just waiting it out. But Friday was really impressive and so we weren't surprised. We were just really pleased that he made it back. And you know, Tyler too. Tyler was banged up too. So both those guys, you know, pulling through for us and showing up and being a big factor was really important."

– Linebacker Darell Taylor played just four snaps against the Giants after being limited in practice last week with a hip/groin injury.

"He wasn't any worse (after the game). He just couldn't go," Carroll said. "He tried and tried. He was very optimistic and hopeful and all of that. I think he had four plays and then he said, 'I just can't push off the way I need to.' And so he didn't re-injure himself."

– Safety Ryan Neal was forced from the game twice in the fourth quarter due to cramping issues.

"He had both hamstrings cramped up and he went back on the field like he was going to go be the hero and he couldn't even make it to the numbers," Carroll joked. "So it's a nice try, good effort and all that, proud of you and all but get your butt out of there."

– Cornerback Tre Brown will have his second week of practice since being designated to return from injured reserve last week.

"I think the trainers are going to want to see him sustain more solid days in a row before they really cut him loose," Carroll said. "But he practiced last week and he practiced with us and he was going full speed, but in limited numbers. So they'll increase his numbers for sure and just see how he handles it and make an assessment at the end of the week. We're not going to rush to get him back after all the time he's been out. But he looked good last week, so I wouldn't be surprised if he's pushing by the end of the week to say he looks like he can play."

– Linebackers Darryl Johnson and Alton Robinson both are not expected to get back to action this week, though Johnson is closer to returning than Robinson. Johnson sustained a stress fracture in his foot against the Detroit Lions. Robinson injured his knee in the team's final preseason game.

"Both of those guys are not ready to go yet," Carroll said. "Alton might be a little bit further away than Bam (Johnson) is. I was champing at the bit to get Bam back this week, but they are telling us probably not that fast. We are still a couple weeks away on those guys."