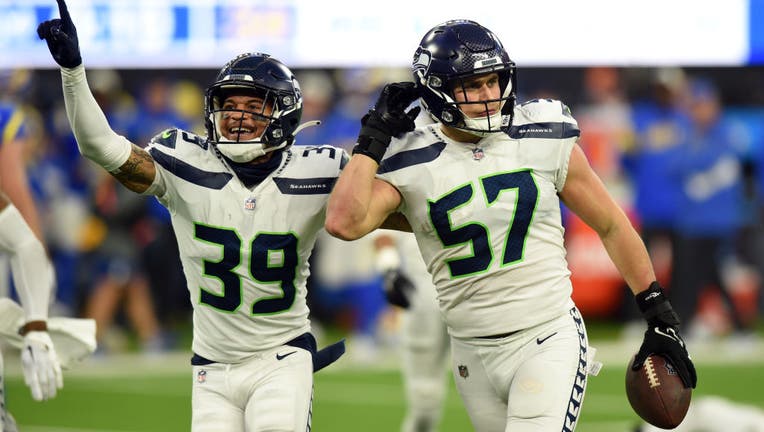 INGLEWOOD, CA - DECEMBER 04: Seattle Seahawks inside linebacker Cody Barton (57) celebrates with Seattle Seahawks cornerback Teez Tabor (39) after catching a pass for an interception in the fourth quarter and helping to seal the victory during an NFL

SEATTLE - Once all the games of Week 17 were settled, Quandre Diggs grabbed his phone and started firing off messages to the few players he still knows with his former team in Detroit.

The Seattle Seahawks know they need help and Diggs wasn’t shy about trying to provide incentives.

"For me, you hit up your old friends and I am like, ‘Hey, I wouldn’t mind taking y’all on vacation if you go ahead and get a ‘W.’ I will pay for your vacation,’" Diggs joked. "You just try to handle your business, first of all."

Handling business for the Seahawks (8-8) means closing out the regular season Sunday with a win over the Los Angeles Rams. Seattle’s only path to the playoffs involves a win over the Rams and then sitting around Sunday night hoping Detroit can come through with a victory over Green Bay that would send the Seahawks to the postseason.

It’s an awkward situation for both the Seahawks and Lions. Detroit would be eliminated by a Seattle win, and the Lions’ only chance of advancing requires a win by Los Angeles (5-11) over the Seahawks. In that case, the Sunday night matchup would be a winner-in, loser-out matchup between the Lions and Packers.

But if Seattle wins in the afternoon, the Lions will only be playing for pride and maybe a slight incentive from one of their former teammates.

"Hopefully my guys can pull through, they can go over there and get a ‘W,’ we handle our business, and everything works out the right way," Diggs said.

The Seahawks missed the playoffs last season and in 2020 were knocked out in the wild-card round by the Rams despite Seattle winning 12 games and the NFC West.

One key piece of that 2020 team will be back in Seattle in an unfamiliar role Sunday. Rams linebacker Bobby Wagner was a pillar to the Seahawks’ success for the 10 seasons he spent in Seattle.

The awkwardness of playing against his old team was taken away last month when the Seahawks visited Los Angeles. And Wagner thrived in the situation with seven tackles, two sacks and an interception in one of his better games of the season.

"It’s a lot of emotions, man, to be honest, but like I said last time I played them, I’m a master of my emotions," Wagner said. "But it’s going into a stadium I’ve been thousands of times, played hundreds of times, and to be in a position to spoil their playoff hopes is always a good position, something worth playing for. It will be fun to go back there."

After a disappointing first half of the season, Seattle is finally getting the disruption it was hoping to get from edge rusher Darrell Taylor. Last week, Taylor had a career-high 2½ sacks and a forced fumble in the win over the Jets.

Taylor has 8½ sacks on the season and recorded at least one in four of the past five games while seeing his playing time increase. He had just three sacks and 14 total tackles through the first 11 games.

"It was pretty tough just not playing the way you wanted to play," Taylor said. "But I feel great now, so that’s what I’m leaning on and I’m excited about that."

The Rams are finally wrapping up the worst season ever played by a defending Super Bowl champion in Seattle.

No champs had ever lost 11 games before these Rams, who were undone by major early season injuries to their offensive line, followed swiftly by season-ending injuries for four of their most important players: Matthew Stafford, Aaron Donald and receivers Cooper Kupp and Allen Robinson.

Sean McVay’s first losing season has inspired soul-searching for the wunderkind coach, and a roster filled with backups and newcomers has lost eight of its last 10 games heading to Lumen Field.

MAN IN THE MIDDLE

While Wagner will deservedly get most of the attention among the linebackers on Sunday, the situation with the Seahawks at that position will be closely watched. Starting middle linebacker Jordyn Brooks suffered a torn ACL in his right knee last week. Seattle will shift Cody Barton to middle linebacker with Tanner Muse expected to start at the other inside linebacker spot for the Seahawks.

Barton has started a career-high 10 games and has 129 tackles on the season.

The trip could be the final appearance by quarterback Baker Mayfield for the Rams, who claimed the former No. 1 pick off waivers from Carolina and swiftly put him behind center for an eventful five-game tenure.

Mayfield proved he’s still an NFL-caliber starter with creditable work in a tough situation, particularly in the Rams’ victories over Las Vegas and Denver. Mayfield will be a free agent this spring, and his best opportunity to be a starter will be elsewhere, since Stafford is expected to return for LA. The market will determine Mayfield’s fate, but the Rams undoubtedly would love to have him as a backup if he can’t find a better home.