Editor’s note: As part of Q13 FOX’s coverage of the Seattle Seahawks and the 2019 NFL Draft, longtime football analyst Rob Rang is providing his analysis of the upcoming draft. Rang has covered the NFL draft for nearly 20 years with his written work featured at CBSSports.com, FOXSports.com, USAToday.com, Yahoo.com, NFL.com, NFLDraftScout.com, the Pro Football Hall of Fame and for various official NFL team sites. He is a frequent contributor to Seattle’s Sports Radio 950 KJR and, along with Aaron Levine and Ian Furness co-hosted Q13 FOX’s pre and post-draft coverage of the Seahawks’ 2018 NFL draft – the first live and local video analysis in the franchise’s history.

SEATTLE – As sad as it was at the time it occurred, the broken leg which abruptly ended Earl Thomas’ highlight-reel-filled career with the Seattle Seahawks in Week Four ultimately had a silver (as well as blue and green) lining.

While the injury – and Thomas’ understandably emotional reaction while being carted off the field - made it crystal clear to everyone that the last standing member of the vaunted Legion of Boom was, in fact, as good as gone, it did allow his projected replacement at free safety, Tedric Thompson, an extended audition.

Replacing an All-Pro and potential future Hall of Famer is a difficult ask of anyone, much less a previously untested player only a year removed from being selected in the fourth round. Thompson leaned on the veteran savvy supplied by Bradley McDougald until going down with his own injury, forcing the latter back to free safety and getting fellow second-year safety Delano Hill onto the field.

Given their youth – as well as that on the perimeter in first and second-year cornerbacks Tre Flowers and Shaquill Griffin – the Seahawks’ pass defense appeared to fare reasonably well last season, finishing in the middle of the pack (17th out of 32 teams) by allowing an average of 240.1 yards per game through the air.

A closer look, however, shows that the club allowed over twice as many passing touchdowns (26) as it intercepted rival quarterbacks (12), something that had not occurred since 2010, Pete Carroll’s first year as coach in Seattle. And remember, these were the results after facing some awful passing attacks last year, including the Arizona Cardinals and San Francisco 49ers, who are drafting 1st and 2nd overall Thursday because of their combined 7-25 record.

If the Seahawks are confident that Thompson, Hill and McDougald will fare better in 2018, safety may not be as much of a concern as it appears on paper. Perimeter cornerback appears to be in strong hands with Flowers blooming just as Griffin did a year earlier as an immediate starter. Nickel cornerback, however, is a position of need after the Detroit Lions lured Justin Coleman away in free agency.

Seattle’s proven track record for finding quality defensive backs in the middle rounds is encouraging and there are plenty of intriguing candidates for GM John Schneider and his staff to choose from this year.

Players are listed in order of their projected selection. The Seahawks currently own five selections in the 2019 NFL draft, 21st overall (First Round), 29th overall (First Round due to Tuesday’s trade of DE Frank Clark), 92nd (Third Round), 124th (Fourth Round) and 159th (Fifth Round). 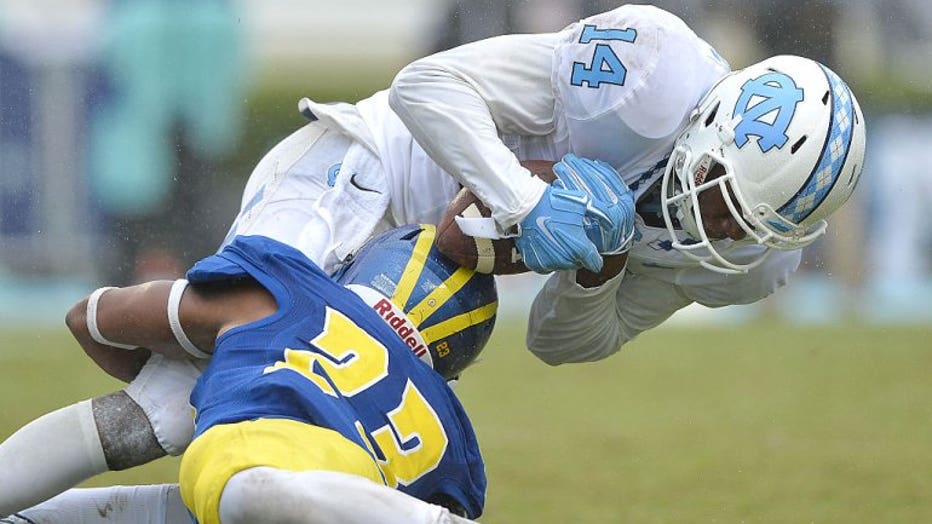 No one in this class possesses the kind of range that Thomas offered but Adderley might be closest. He is widely regarded as the top small school prospect in this draft, dominating at the lower level and performing well against top competition at both the Senior Bowl and Combine. Adderley played his first two seasons at cornerback before switching to free safety, offering intriguing versatility. He also possesses ideal bloodlines with his cousin, Herb Adderley, a Hall of Fame defensive back who played in Green Bay and Dallas. 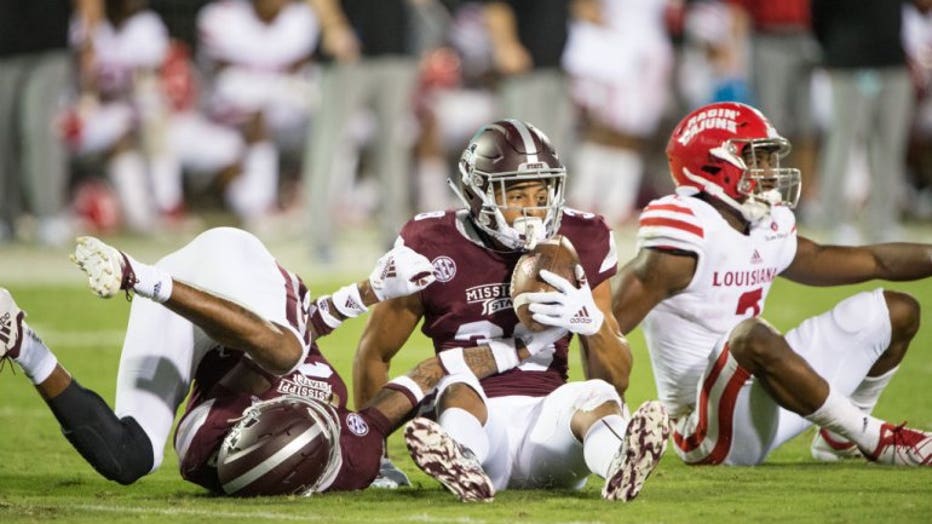 STARKVILLE, MS - SEPTEMBER 15: Safety Johnathan Abram #38 of the Mississippi State Bulldogs intercepts a pass intended for wide receiver Ja'Marcus Bradley #2 of the Louisiana-Lafayette Ragin Cajuns during the third quarter on September 15, 2018 at Da

The Seahawks prioritize physicality in their defensive backs and no one in this class is a more intimidating hitter than Abram, who was the alpha dog on a Mississippi State defense that also boasted projected first round defensive linemen Montez Sweat and Jeffery Simmons. Despite his 40-yard dash time, Abram is not as fluid in coverage as Adderley or some of the other free safety candidates a little lower on this list but he would bring back some of the swagger missing last year in the Seattle secondary. 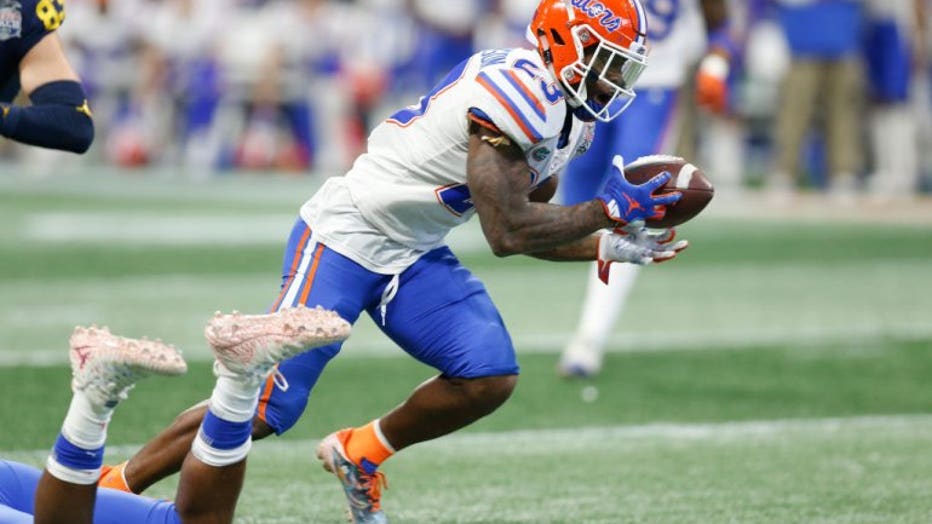 ATLANTA, GEORGIA - DECEMBER 29: Chauncey Gardner-Johnson #23 of the Florida Gators returns an interception for a touchdown in the fourth quarter against the Michigan Wolverines during the Chick-fil-A Peach Bowl at Mercedes-Benz Stadium on December 29

It is perhaps appropriate that his last name is hyphenated as Gardner-Johnson played a slash role for the Gators over his short (three years) but distinguished career. He joined Hall of Fame running back Emmitt Smith as the only Florida freshman to ever win MVP honors of a bowl game and accomplished the same thing in his final college game, showing an exciting knack for producing turnovers. He played at both free and strong safety, as well as nickel corner against elite SEC competition. Of all the defensive backs on this list, Gardner-Johnson perhaps checks the most Seahawks’ boxes. 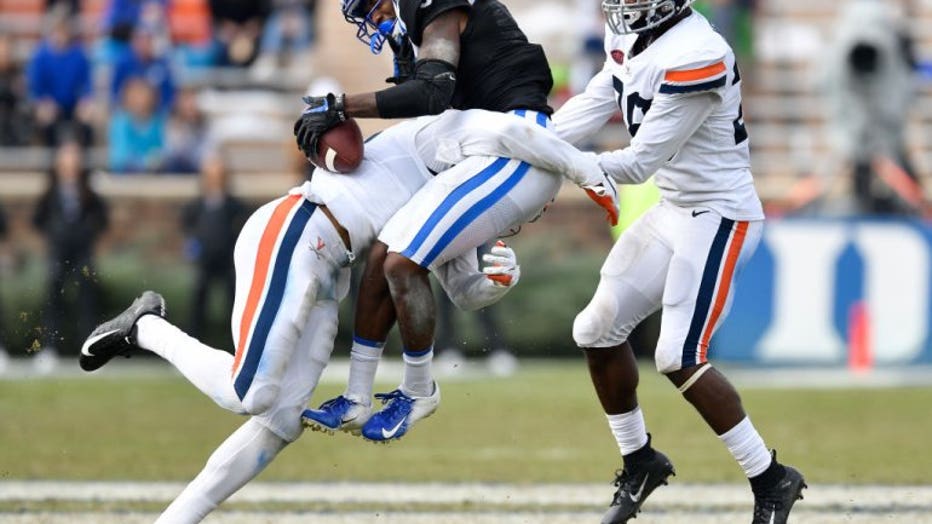 DURHAM, NC - OCTOBER 20: Juan Thornhill #21 and Brenton Nelson #28 of the Virginia Cavaliers tackles T.J. Rahming #3 of the Duke Blue Devils after a catch during their game at Wallace Wade Stadium on October 20, 2018 in Durham, North Carolina. Virgin

Speaking of ball-skills, in terms of getting his hands on passes, no defensive back (either corner or safety) has put up better numbers than Thornhill, who recorded 26 passes defensed and an impressive 13 interceptions over the past three seasons. Like some of the others on this list, Thornhill has extensive experience at cornerback as well as safety, impressing at each role. He showed off his exceptional athleticism at the Combine, wowing with a 4.42-second 40-yard dash and 44” vertical jump, both best among the top-rated safeties. 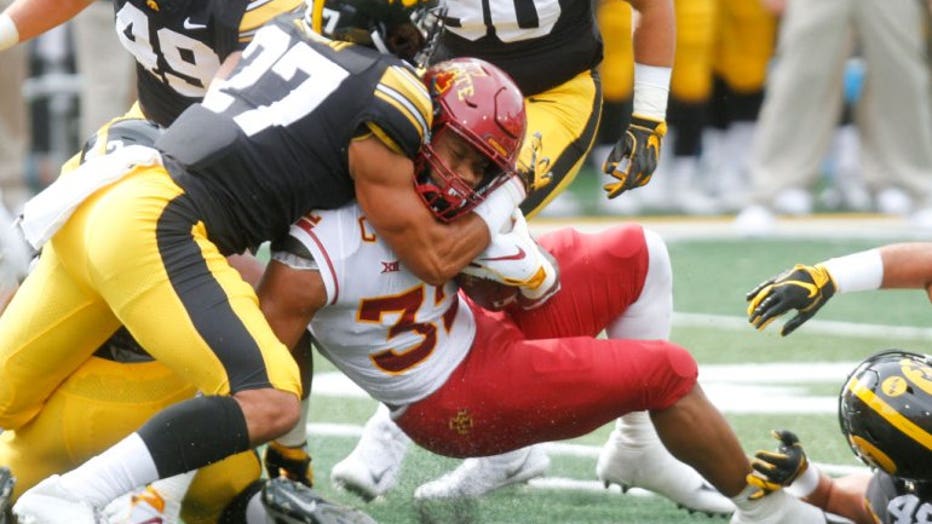 IOWA CITY, IOWA- SEPTEMBER 08: Runningback David Montgomery #32 of the Iowa State Cyclones is brought down during the first half by defensive back Amani Hooker #27of the Iowa Hawkeyes on September 8, 2018 at Kinnick Stadium, in Iowa City, Iowa. (Phot

Hooker’s value lies with his versatility and the perception that he still has untapped potential. He began his career as a classic strong safety but was dropped down to play more of a big nickel corner role for the Hawkeyes in 2018, giving Iowa its third consecutive Big Ten Defensive Back of the Year winner (along with Desmond King, Josh Jackson). With only one year as a fulltime starter and some inconsistencies on tape, Hooker is a bit polarizing in the scouting community but he offers the ball-skills and closing speed Seattle expects of its defensive backs. 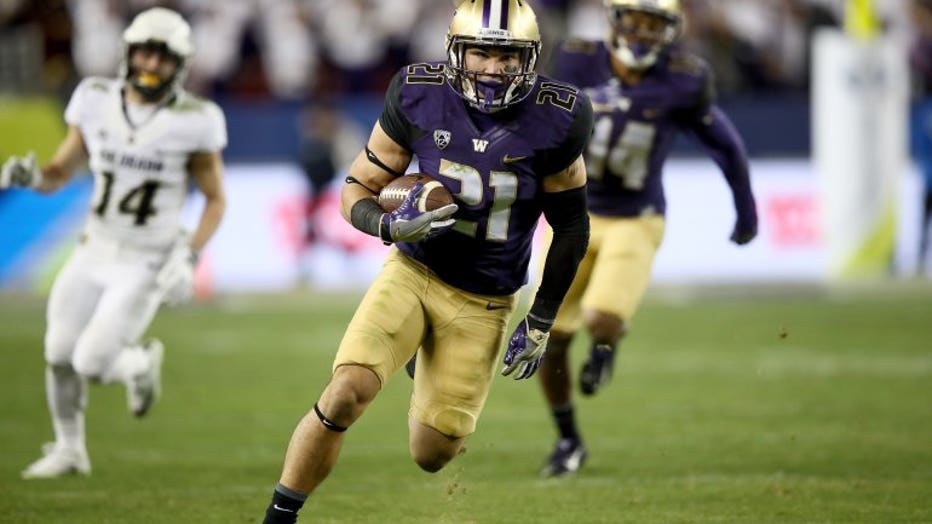 SANTA CLARA, CA - DECEMBER 02: Taylor Rapp #21 of the Washington Huskies runs back an interception during their game against the Colorado Buffaloes in the Pac-12 Championship game at Levi's Stadium on December 2, 2016 in Santa Clara, California. (Pho

A disappointing 40-yard dash at his Pro Day generated some negative attention but the tape doesn’t lie – Rapp is a legitimate starting caliber strong safety in the NFL, whose instincts and ultra-reliable tackling skills compare favorably to the Seahawks’ McDougald (who notably was clocked at 4.74 seconds in the 40-yard dash at the 2013 Combine). It did not go unnoticed by scouts that all three touchdowns thrown by Ohio State’s Dwayne Haskins in the Rose Bowl came in the holes left vacated by Rapp, who was unable to play in the game due to a hip injury. 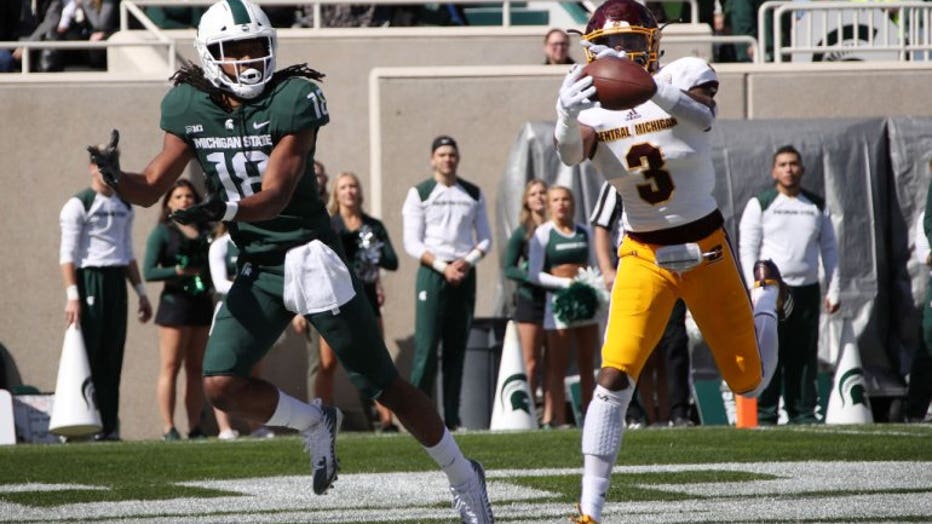 EAST LANSING, MI - SEPTEMBER 29: Sean Bunting #3 of the Central Michigan Chippewas intercepts a pass next to Felton Davis III #18 of the Michigan State Spartans during the first hlaf at Spartan Stadium on September 29, 2018 in East Lansing, Michigan.

The Seahawks love players with a chip on their shoulder and Bunting certainly has that, opting to travel to CMU to convince the coaches there that he deserved a scholarship after falling through the recruiting cracks. He spent time at safety and wide receiver before getting a shot at cornerback, where he excelled the past two years, ultimately leaving school early for the NFL after the program fired the head coach that brought him in. Bunting is an instinctive, physical and highly competitive player who would fit in with the Seahawks’ style. 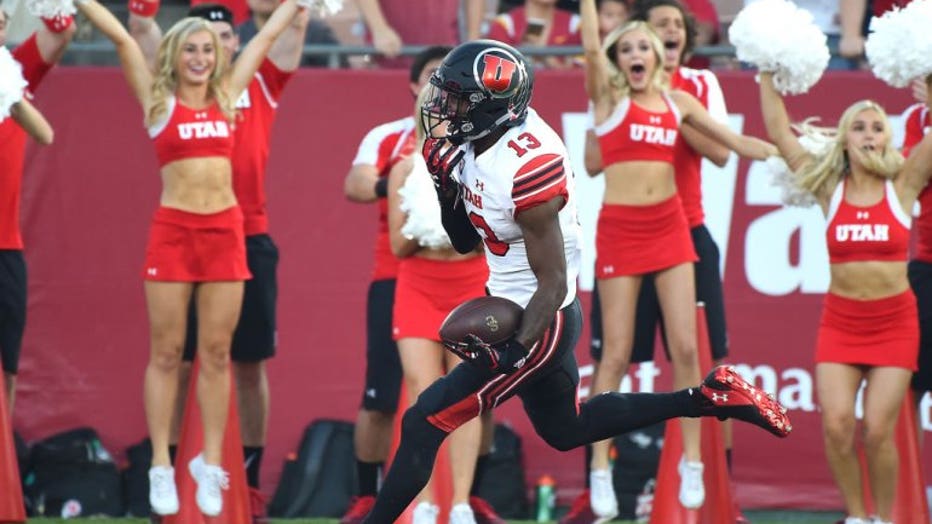 LOS ANGELES, CA - OCTOBER 14: Defensive back Marquise Blair #13 of the Utah Utes runs the ball into the end zone after an interception in the first quarter of the game against the USC Trojans at the Los Angeles Memorial Coliseum on October 14, 2017 i

With just two career interceptions (both in 2017) at the FBS level, Blair certainly does not possess the track record of turnovers the Seahawks prefer but his lanky frame, range and open-field tackling skills make him an intriguing middle round possibility. Further, Blair has some fight to him, showing resiliency in battling back from knee injuries and stops at Syracuse and Dodge City Community College before emerging as a starter for a Utes’ squad known for producing NFL-caliber defensive backs. 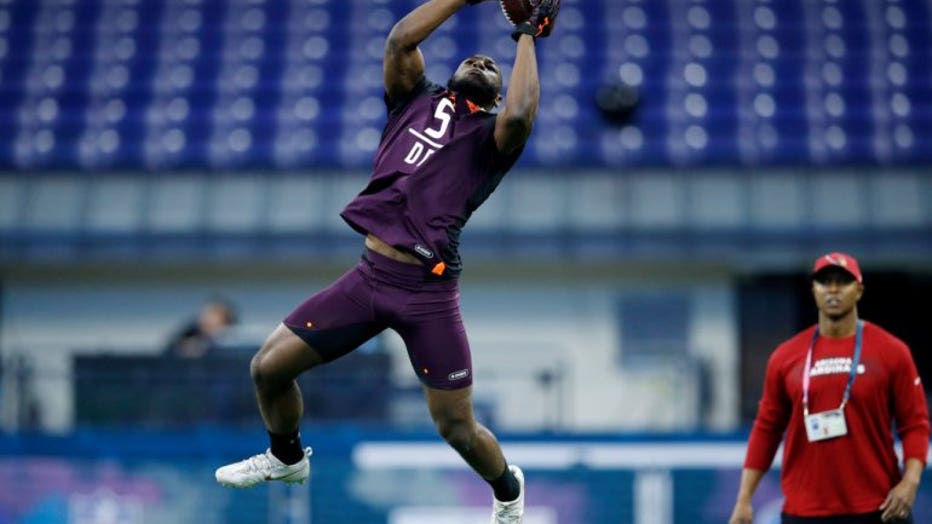 INDIANAPOLIS, IN - MARCH 04: Defensive back Kris Boyd of Texas works out during day five of the NFL Combine at Lucas Oil Stadium on March 4, 2019 in Indianapolis, Indiana. (Photo by Joe Robbins/Getty Images)

Cat-quick and highly physical, Boyd is among the more Seahawk-y nickel corner candidates of this year’s draft. He is also among the most battle-tested, playing in 50 games (including 32 starts) for the Longhorns, as well as competing in the Senior Bowl. While gritty, Boyd lacks ideal ball-skills, only turning three of his 35 career passes broken up into interceptions. 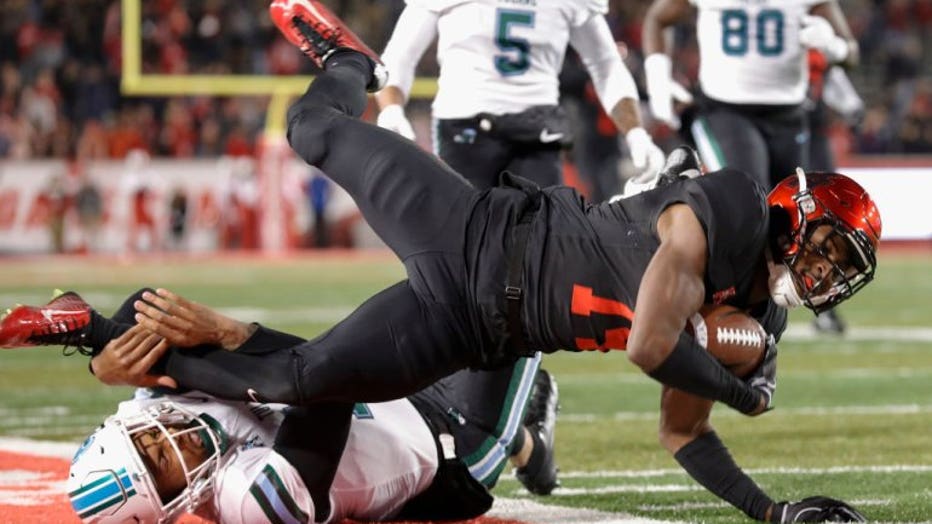 HOUSTON, TX - NOVEMBER 15: Isaiah Johnson #14 of the Houston Cougars is tackled after an interception by Justin McMillan #12 of the Tulane Green Wave in the second quarter at TDECU Stadium on November 15, 2018 in Houston, Texas. (Photo by Tim Warner/

The Seahawks boast both solid starters and good depth on the perimeter but this draft has enough long, physical cornerbacks who meet their criteria to consider adding more talent on Day Three. Johnson, a former wide receiver like Richard Sherman, offers an intriguing skill-set worthy of developing. He remains quite raw, ‘rassling with receivers more than covering them at times at the Senior Bowl but his height, speed and 33” arms are undeniable and he is a quality gunner on special teams, as well.