Commentary: Wilson trade could prove to be biggest fleecing of an organization in modern sports history

Some people have asked: What is your obsession with Russell Wilson and the Denver Broncos? While the simple answer is that their demise this season equates to a better future for the Seattle Seahawks, it actually means a bit more than that. FOX 13 Sports Director Aaron Levine has more in this week's Seattle Sports Live commentary.

RENTON, Wash. - Seattle Seahawks wide receiver DK Metcalf suffered an injury to his patellar tendon but does not need surgery at this time, according to coach Pete Carroll.

Speaking on his weekly radio show on KIRO-AM on Monday morning, Carroll said the team got a "great report" about Metcalf after he left Sunday’s win over the Los Angeles Chargers in the first half.

Metcalf appeared to be hurt leaping for a catch in the end zone late in the first quarter and was immediately ruled out by the team.

X-rays in Los Angeles on Sunday were negative and Metcalf underwent additional scans back in Seattle on Monday morning. Carroll said there is no timeline for Metcalf’s potential return. 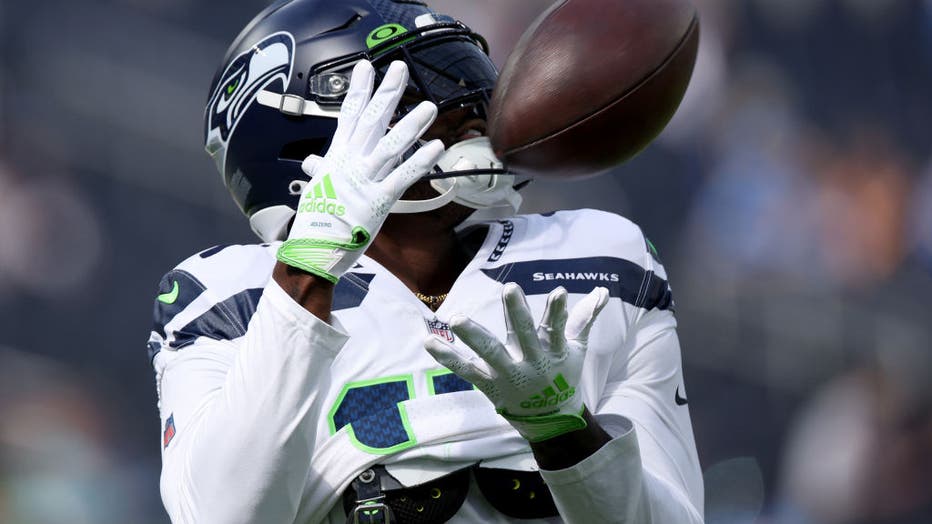 INGLEWOOD, CALIFORNIA - OCTOBER 23: DK Metcalf #14 of the Seattle Seahawks makes a catch during warm up before the game against the Los Angeles Chargers at SoFi Stadium on October 23, 2022 in Inglewood, California. (Photo by Harry How/Getty Images)

RELATED: Commentary: Wilson trade could prove to be biggest fleecing of an organization in modern sports history

Metcalf had one catch for 12 yards against the Chargers before getting injured. For the season, Metcalf has 31 receptions for 418 yards and two touchdowns through seven games.