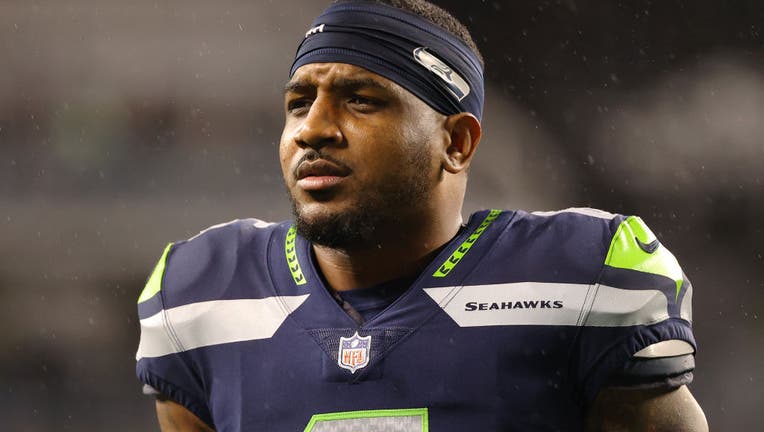 SEATTLE, WASHINGTON - OCTOBER 25: Quandre Diggs #6 of the Seattle Seahawks reacts after the 13-0 loss to the New Orleans Saints at Lumen Field on October 25, 2021 in Seattle, Washington. (Photo by Abbie Parr/Getty Images)

GLENDALE, Ariz. - Seattle Seahawks Pro Bowl safety Quandre Diggs was carted off the field after suffering a broken right leg and dislocated ankle in the fourth quarter Sunday against the Arizona Cardinals.

"Just a heartbreaker because everybody loves who he is," Carroll said after the Seahawks beat the Cardinals 38-30.

Diggs appeared to slip on the grass just before being blocked and immediately grabbed his lower leg. Players on both teams were visibly upset as Seattle’s trainers worked on Diggs. Teammate D.J. Reed threw his helmet.

Diggs was in tears as he was carted off, as were several of his teammates.

News of his injury made it across the NFL, too. Before taking questions after a loss to Miami, New England Patriots defensive back Adrian Phillips made a teary-eyed statement about Diggs.

"I just want to start this off to say I’m praying for Quandre," said Phillips, his voice shaking. "He just had a gruesome injury. I just want you to know I love you bro’. I hate this so much. I’m just praying for you. I will talk to you as soon as I can. I just want to get this over with."

Media in the room told Phillips he didn’t have to answer any questions and he returned to the Patriots’ locker room."

Diggs made his first Pro Bowl this season and is set to be a free agent this offseason. He led the Seahawks with five interceptions this season and was third with 63 tackles before Sunday’s game.