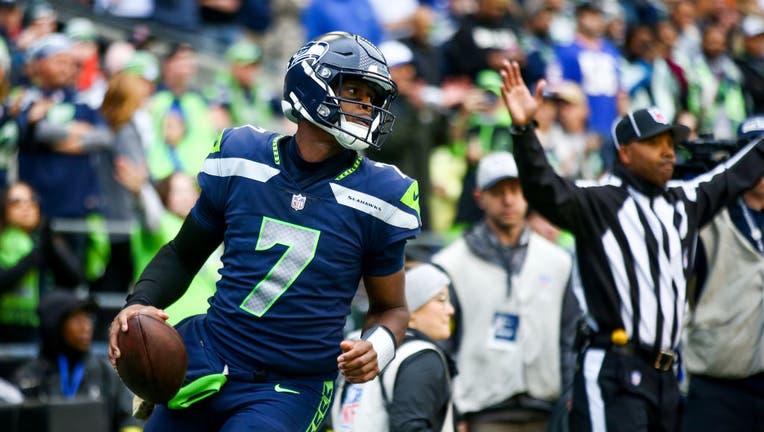 SEATTLE, WASHINGTON - OCTOBER 30: Geno Smith #7 of the Seattle Seahawks turns back after running the ball against the New York Giants during the first half of the game at Lumen Field on October 30, 2022 in Seattle, Washington. The Seahawks beat the G

SEATTLE - At what point does the conversation start to get serious about what’s happening with the Seattle Seahawks?

At first, it seemed a novelty that the team many considered before the season to be among the worst in the NFC was finding some success in the post-Russell Wilson era. Starting off 2-2 for a team pegged by oddsmakers not to win six games this season was kind of quaint.

But it seems past time for the tone about the Seahawks to change, especially after their thorough 27-13 win over the New York Giants on Sunday.

Seattle is 5-3, winners of three straight and leading the NFC West. They’re playing a complementary style during this win streak that other teams should be envying, especially those that were supposed to be the elite of the NFC and are currently scuffling.

There’s no guarantee this is going to continue for Seattle. But maybe, just maybe, Pete Carroll knew what he was doing all along.

"I hate that we were crappy early in the year and we weren’t doing stuff right, but we held on to it and we knew -- we felt like we knew where we could go, and we’re getting going," Carroll said after Sunday’s win. "All the people that doubt — we run the ball too much, you don’t understand football and he can’t stay up with the new game and all that kind of stuff — that’s a bunch of crap, I’m telling you."

"We’re doing fine. We’re all right. I don’t mind proving it day in and day out."

Seattle’s next two games are on the road at Arizona and against Tampa Bay in Germany before the bye week. But both games seem winnable and 7-3 can’t be out of the question for Seattle.

And while there were noted improvements in the wins over Arizona and the Chargers, the real test came Sunday against the Giants’ Saquon Barkley and the No. 2 rush offense in the NFL.

Clearly, the Seahawks passed the test. Barkley was held to a season-low 53 yards and averaged just 2.7 yards per carry. Quarterback Daniel Jones was unable to add the running element to his game and managed only 20 yards rushing a week after running for 107 against Jacksonville.

"A lot of things that the Giants do is that they throw a lot of plays at you and see what works. If they find one, they are going to run it over and over and over again," Seattle defensive lineman Shelby Harris said. "I feel like they were doing a lot of testers and there wasn’t much working. The front seven, the whole defense did well."

It’s nit-picking coming off such a complete performance, but Seattle’s run game was fairly mundane until Kenneth Walker III broke free for a 16-yard touchdown run late in the fourth quarter. Take away that run, and Walker averaged 2.1 yards per carry on his other 17 attempts, and Seattle had just 87 yards total on the ground as a team.

A few weeks ago, Bruce Irvin was working out back in Atlanta wondering if his NFL career was at its end. On Sunday, he was on the field for 47 defensive plays, made two tackles and nearly had a couple of sacks. Irvin, who turns 35 on Tuesday, needed to play that much because Darrell Taylor was dealing with a hip/groin injury, and showed that his presence with the Seahawks is far more than just as a veteran mentor around to hold younger players accountable.

"Confidence and swagger. Guys are finally believing in themselves, are believing in one another, and if we have a messed up play, we don’t dwell on it, we move onto the next play," Irvin said.

CBs Artie Burns and Sidney Jones were expected to be the starters at cornerback before the season. Both have battled injuries, but neither seems to have a path to see the field anytime soon with how Tariq Woolen and Michael Jackson have played.

Seattle came out of the game mostly healthy, although versatile safety Ryan Neal left in the fourth quarter with cramps in both hamstrings. Center Austin Blythe also suffered a minor knee sprain, but Carroll said he could have returned in the second half if he was needed.

RELATED: Seahawks form continues to solidify with win over Giants

Seattle won’t be at home again for nearly a month with its next two games on the road. The Seahawks are at Arizona next Sunday before traveling overseas to face Tampa Bay in Germany. Seattle is 7-1-1 in the past nine games against the Cardinals in Arizona.