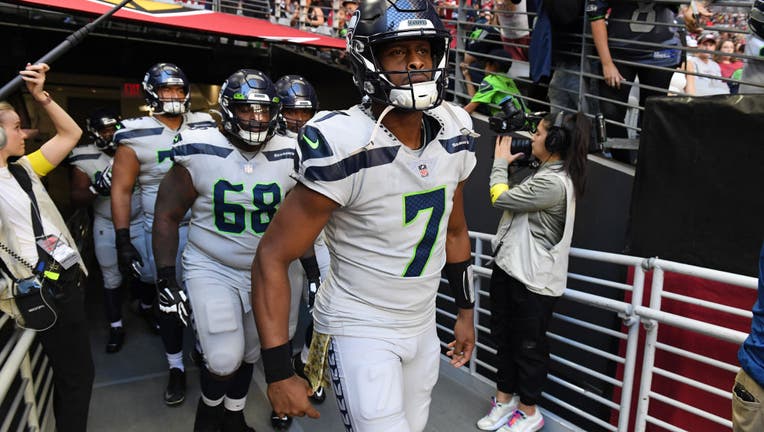 GLENDALE, ARIZONA - NOVEMBER 06: Geno Smith #7 of the Seattle Seahawks runs onto the field prior to a game against the Arizona Cardinals at State Farm Stadium on November 06, 2022 in Glendale, Arizona. (Photo by Norm Hall/Getty Images)

RENTON, Wash. - After an afternoon practice the Virginia Mason Athletic Center on Wednesday, the Seattle Seahawks headed to the airport for their 10-hour flight to Munich, Germany ahead of this Sunday's game against the Tampa Bay Buccaneers.

The game is the first regular season NFL game to be played in Germany and will be hosted at Allianz Arena, which is the home of FC Bayern Munich. The NFL previously hosted preseason games in Berlin and had German cities as home teams for the now-defunct NFL Europe development league.

"This is like an NFL bowl game; you pick everything up and you go," head coach Pete Carroll said. "The fact is that we did it, we did it really well last time (in London), and we learned a lot. Matt Capurro is the star player in this whole thing, he makes the whole thing work. Really, we are going to get on the bus, get on the plane, we will sleep a little bit longer, and we will be in a different country. It's really not that big of a deal."

The Seahawks cruised to a 27-3 victory over the Oakland Raiders at Wembley Stadium in London in 2018 in their only other overseas regular season game in franchise history.

It's an especially unique trip for practice squad linebacker Aaron Donkor to a part of a team heading to Germany.

Donkor is a German native that was born in Achern, near the French border, and grew up in Göttingen in central Germany. Göttingen is a five-and-a-half hour drive from Allianz Arena in Munich, but Donkor said he'll have a large contingent of family make the trip for the game.

"It’s going to be a party. I already know," Donkor said of the atmosphere he expects for the game. "They’re excited, and it’s going be a Super Bowl in every sense of the word."

Donkor played American football in Germany before coming to the United States to go to college and play college football at New Mexico Military Institute and Arkansas State. He joined the Seahawks in 2021 as part of the NFL's international player pathway program that allows an extra practice squad spot to teams for a player of foreign origin.

"The German fans, they’re going to embrace us. They’re going to love us," Donkor said "I’m not sure if they know who to root for, but we’ll make sure they feel us when we step on that field."

Donkor has yet to play in a regular season game for Seattle, but the opportunity does exist for him to play in his home country on Sunday. With linebacker Cullen Gillaspia going down with a knee injury last week, Seattle is short-handed at the position. Donkor, Alexander Johnson and/or Vi Jones are all candidates that could be elevated from the practice squad for additional depth.

"It’s a blessing," Donkor said of his two years with the Seahawks. "I’m learning every day. I’m growing. I’m becoming a better teammate. I’m just excited for today, excited for the future."

Donkor is one of just five players in the NFL currently to have been born in Germany. Las Vegas Raiders fullback Jakob Johnson and New York Giants offensive lineman Devery Hamilton are the only two currently on active rosters in the NFL. Washington Commanders defensive tackle David Bada and Indianapolis Colts defensive back Marcel Dabo are on practice squads. Kicker Dominik Eberle is currently a free agent, but kicked in a game against the Seahawks for the Detroit Lions earlier this year.