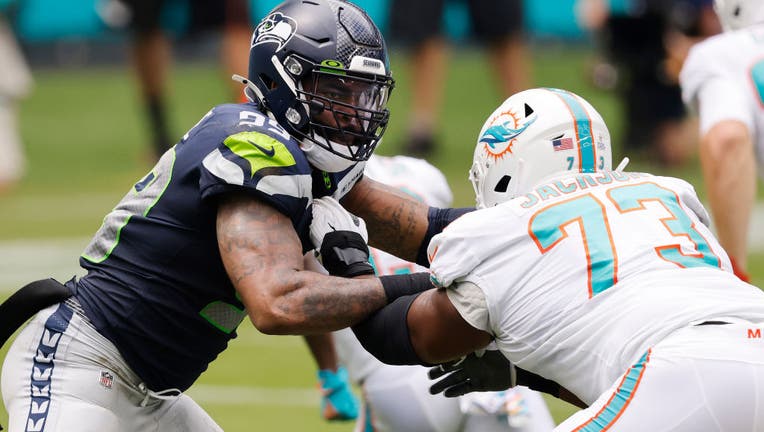 MIAMI GARDENS, FLORIDA - OCTOBER 04: Damontre Moore #99 of the Seattle Seahawks rushes around Austin Jackson #73 of the Miami Dolphins during the second half at Hard Rock Stadium on October 04, 2020 in Miami Gardens, Florida. (Photo by Michael Reaves

RENTON, Wash. - Seattle Seahawks defensive lineman Damontre Moore was suspended six games by the NFL on Monday for violation of the league’s policy on performance-enhancing substances.

Moore will be eligible to return to the Seahawks’ roster following their Week 14 game against the New York Jets.

Moore is in the second stint of his career with the Seahawks. He’s appeared in all seven games this season and has eight total tackles, one sack and one fumble recovery. He’s also played significantly on special teams.

Moore had two tackles, including one tackle for loss, in Sunday’s victory over San Francisco.

The loss of Moore in Seattle’s defensive line rotation should be softened by the expected return of Rasheem Green from injury and the addition of Carlos Dunlap, both of which should happen this week.