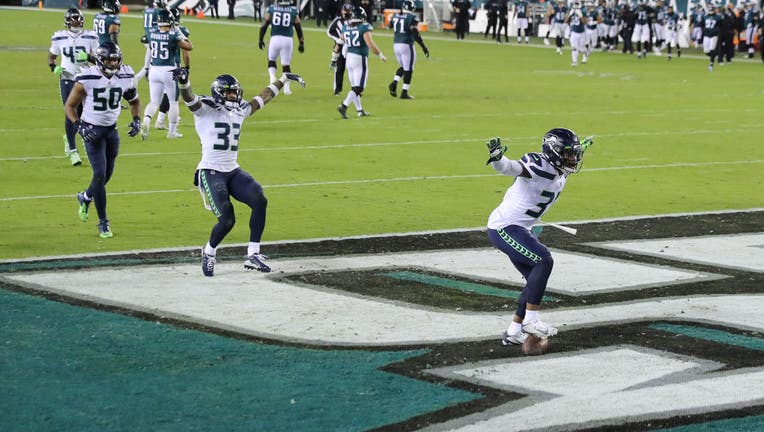 PHILADELPHIA, PENNSYLVANIA - NOVEMBER 30: Quandre Diggs #37 of the Seattle Seahawks celebrates an interception against the Philadelphia Eagles during the fourth quarter at Lincoln Financial Field on November 30, 2020 in Philadelphia, Pennsylvania. (P

SEATTLE - Justifiably maligned for the first half of the season, something has happened to the Seattle Seahawks defense in the past three weeks.

They’re getting stops. They’re causing disruption and forcing turnovers. They’re starting to be the complement to Seattle’s offense that continues to sizzle in different ways.

The latest example came in Monday night’s 23-17 win over Philadelphia. Seattle (8-3) sacked Carson Wentz six times. They held the Eagles to 250 yards and only a touchdown and 2-point conversion in the final seconds made the score as close as it was.

“From the beginning, we knew what we had, we knew what type of talent we had,” safety Jamal Adams said. “It was only a matter of time.”

That’s three straight games where Seattle has looked competent on defense as opposed to the group that for the first half of the season was on pace to give up a record amount of yards.

And the timing couldn’t be better.

Seattle’s current four-game stretch that started with the win over the Eagles will likely decide the NFC West race and whether the Seahawks have a shot at the No. 1 seed in the NFC. They are all games Seattle should win and if the Seahawks can continue to play this well defensively they might find themselves back in the role of favorites in the NFC by the time a Week 16 showdown with the Los Angeles Rams rolls around.

Philadelphia would appreciate if it never had to face DK Metcalf again. Seattle’s young star has produced two of the best games of his career against the Eagles. The first came in last year’s playoffs when he had 160 yards receiving. He followed up with 10 catches for 177 yards on Monday night, tormenting Philadelphia cornerback Darius Slay throughout.

While he deserves praise for the way Seattle has functioned offensively most of the season, Monday was not the best game for offensive coordinator Brian Schottenheimer. At times, the Seahawks seemed disjointed and struggled to establish consistency in the run game even with the return of Chris Carson.

There was also the fourth-down situation in the first quarter when Seattle seemed to have a chance to put the game out of reach early. The Seahawks were stopped on fourth-and-goal at the 2 and fourth-and-2 at the Philadelphia 37 with puzzling play calls that both came after timeouts.

“We lost all of whatever momentum we could have had the first quarter by not getting scores and converting and completing the sequence. I just didn’t like it,” Carroll said.

The extended break after playing on a Thursday night in Week 11 was a major benefit to Adams and his sore shoulder. It helped result in possibly the best game of the season for Adams against the Eagles. He continued to be effective coming on blitzes as a pass rusher, but Adams was also solid in his pass coverage.

Adams now has 6½ sacks on the season and is the first defensive back to have six or more sacks in multiple seasons since the sack became an official stat in 1982.

The tight end was once a major part of Seattle’s pass game, but with the emergence of the Metcalf-Tyler Lockett combo the position has become more of an afterthought. Jacob Hollister had two catches against the Eagles. Will Dissly didn’t even get a target. Among the tight ends, Greg Olsen was leading the way with 23 catches on 35 targets, but he’s likely out the rest of the regular season with a foot injury.

Seattle came out of the victory with one significant injury concern moving forward. Carlos Dunlap has a sore foot and underwent an MRI after the team returned to Seattle, Carroll said on his radio show Tuesday morning. Dunlap has been a big part of the resurgence in Seattle’s pass rush since his arrival via trade from Cincinnati. Depending on the severity, the Seahawks can likely manage the next few weeks without Dunlap, but would definitely want him back by Week 16 vs. the Rams.

9 — Bobby Wagner became the third player since 2000 to have nine consecutive seasons of at least 100 tackles after his five tackles on Monday night pushed him over the century mark.

“We’re looking at a Hall of Fame football player,” Carroll said. “We’re so accustomed to the way he plays and the tremendously consistent numbers he continues to add up, and we maybe don’t realize how great a player he is and how hard it is to do what he’s doing.”

It’s a surprising showdown of first-place teams when the Seahawks host the NFC East-leading New York Giants on Sunday. Seattle plays three of its last five games at home.