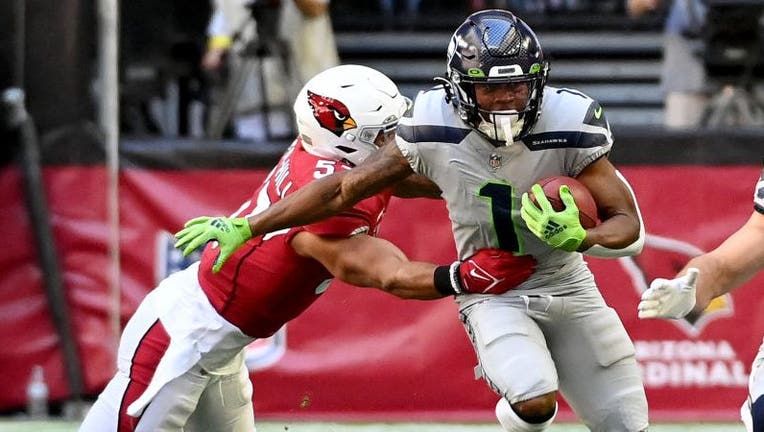 GLENDALE, ARIZONA - NOVEMBER 06: Dee Eskridge #1 of the Seattle Seahawks runs back the opening kickoff in the first quarter of a game against the Arizona Cardinals at State Farm Stadium on November 06, 2022 in Glendale, Arizona. (Photo by Norm Hall/G

RENTON, Wash. - The Seattle Seahawks have ruled out wide receiver Dee Eskridge for Sunday's game against the Las Vegas Raiders due to a broken bone in his right hand.

Eskridge injured the hand in Seattle's 21-16 loss to the Tampa Bay Buccaneers in Munich, Germany two weeks ago. He had just two kickoff returns in the contest and was drilled on the hand by Buccaneers' cornerback Zyon McCollum.

"He's got a broken hand in some sort and as a catcher, can't do much about that," Carroll said of Eskridge.

Carroll said that a transaction is coming with Eskridge as he will likely be heading to injured reserve, though Carroll said it's "quite possible" Eskridge will be able to return to the roster this season.

Seattle could look to bring up an extra receiver from the practice squad with Eskridge set to miss time. Carroll mentioned Laquon Treadwell as a guy he's eager to get a look at.

"Anxious to see what Treadwell does when he gets a chance. He hasn't had a shot to do much but we'll see how he fits in," Carroll said of Treadwell.

"He seems to be very well-equipped," Carroll said. "He seems like a pro. He runs his routes really crisply. He's really attentive about doing a number of things. He can play different positions for us. He's big catching the football. He looks like one of our guys and fits in very well."

DK Metcalf, Tyler Lockett and Marquise Goodwin are Seattle's top three receiving options. Penny Hart and rookie Dareke Young also are on the active roster as additional depth at the position with a practice squad call-up such as Treadwell providing additional depth.

If Eskridge goes on injured reserve, they'll have an opening on the 53-man roster. Since the team can temporarily elevate two players from the practice squad for the game, there isn't necessarily a need to fill the roster spot this week. The rest of the roster is healthy for the Seahawks with Eskridge the only player on the final injury report.

Linebacker Jon Rhattigan returned to practice this week on the physically unable to perform list, but he'll likely need more than one week of work to get game ready after missing the entire season up to this point. Linebacker Alexander Johnson and cornerback Xavier Crawford are other possible elevations from the practice squad for Sunday's game.

Running back DeeJay Dallas missed Friday's practice due to illness but is expected to play. He could likely take over kickoff return duties again with Eskridge out.

Cornerback Tre Brown has a chance to play Sunday as well after another full week of practice.

"Great. He was full speed," Carroll said of Brown's week, though he didn't commit to Brown being active for Sunday's game just yet.

Brown has missed the entire season so far as he works back from a torn patella tendon sustained just over a year ago on Nov. 21, 2021.

Defensive end L.J. Collier (illness), guard Damien Lewis (ankle) and safety Ryan Neal (ankle) were all full participants on Friday. Safety Joey Blount did not practice due to a personal matter. All are expected to play against Las Vegas.

Meanwhile, the Raiders added running back Josh Jacobs to their injury report on Friday as he was limited with a calf injury. He's now questionable to play against Seattle.

Jacobs is third in the NFL with 930 rushing yards on the season and is averaging 5.1 yards per carry for the Raiders.

"He's a really good catcher as well. He's a complete player, he's as good as anybody and it's not just the physical part which really attracts you because he'll knock into guys and bounce off tackles and make you miss that way. He can break the ball also and get on the sidelines and get upthe sidelines and go for long yardage plays. He got a lot of big plays and so he's a great player. He's a franchise running back."