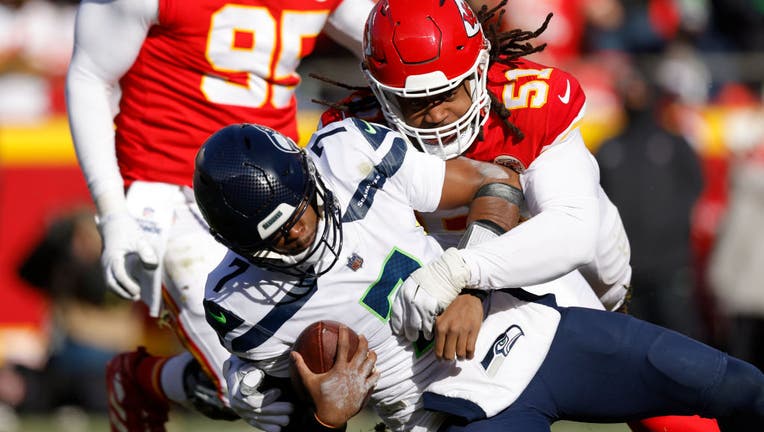 Mike Danna #51 of the Kansas City Chiefs sacks Geno Smith #7 of the Seattle Seahawks during the second quarter at Arrowhead Stadium on December 24, 2022 in Kansas City, Missouri. (Photo by David Eulitt/Getty Images)

RENTON, Wash. - Three full games have passed since the most recent time the Seattle Seahawks found themselves in the lead.

That’s 180 minutes of game time spent playing opposite the formula that worked so well for Seattle just a couple of months ago when it looked like a sure playoff team. Seattle’s third straight loss and fifth in the past six games came last Saturday in a 24-10 setback at Kansas City where the Seahawks stumbled with clear chances to put a scare into one of the best teams in the AFC in the second half.

It was another game where the plan that led to success earlier in the season was flipped. While there were improvements defensively, Seattle was terrible offensively in the first half, finished just 2 of 14 on third down conversions and failed to score on three drives inside the Kansas City 40 in the second half.

"That’s what it feels like. We’re not playing connected to help one another out and take advantage of a terrific day of defense," Seattle coach Pete Carroll said. "We weren’t able to do that."

Yet, despite the glaring issues and appearance that Seattle doesn’t have the look of a playoff team, the postseason is still a possibility. The first step is winning the final two home games, beginning with Sunday’s matchup against the New York Jets. Seattle also needs help.

Seattle also needs to rediscover what was working earlier in the season when Geno Smith wasn’t under constant pressure from a leaky offensive line, when Kenneth Walker III and Seattle’s run game was humming and when the Seahawks had a pass rush capable of flustering opposing quarterbacks. All those appeared in brief moments against the Chiefs.

Ultimately, just having the lead again would be a good place to start for the Seahawks.

"We had a tough stretch, but that’s in the past. That’s got to be in the past," Smith said.

Takeaways from Seahawks 24-10 loss to Chiefs

The Seattle Seahawks offense took too long to thaw out in frigid Kansas City on Saturday as they lost their third straight game 24-10 to the Chiefs.

Walker was finally able to rediscover the run game in the second half against Kansas City. Walker had 91 of his 107 yards rushing in the second half, the first time Seattle’s had a running back top 100 yards since Walker did it more than a month ago in Arizona. Walker had 126 yards total in his previous four games combined.

The challenge now is continuing it this week against a Jets defense that is 11th in the league at stopping the run.

Seattle must find a way to get better on third downs offensively. The Seahawks were just 2 of 14 on third down conversions against the Chiefs and that was likely the place where the absence of wide receiver Tyler Lockett was felt the most.

Smith was 7 of 11 passing on third downs, but none of those completions resulted in first downs.

Ultimately, the Seahawks need to be better on first and second downs as 11 of the 14 third down attempts were of 6 yards or longer, and seven were 10 yards or longer.

Defensive coordinator Clint Hurtt has taken a lot of heat for Seattle’s struggles at stopping the run this season, but the overall defensive performance against the Chiefs was a significant improvement. Kansas City finished with 77 yards rushing — the second fewest allowed this season by Seattle — and had 297 total yards, the first time the Seahawks have held an opponent under 300 yards since Week 9 at Arizona.

Laquon Treadwell had a shaky outing after getting signed to the active roster last week. Treadwell had three catches for 26 yards on seven targets against the Chiefs. He had one key drop, but his bigger transgression came on the first play of the fourth quarter when he failed to get enough depth on his route on fourth down and came up short.

Carroll said that Lockett wants to play this week after undergoing surgery to repair a broken bone in his left hand a week ago. It will all come down to how well Lockett is able to catch passes and won’t be known until later in the week. ... RT Abraham Lucas and TE Will Dissly both underwent MRIs on Monday to have knee injuries examined further. Lucas has been bothered by a patellar tendon issue and had to leave the loss to the Chiefs early. Dissly suffered a knee contusion in the game. Carroll didn’t have updates about either. Seattle is also unsure if DT Al Woods (Achilles) and S Ryan Neal (knee) will be back for the game against the Jets.

8 — Smith has eight turnovers — five interceptions and three lost fumbles — during Seattle’s 1-5 slide. In the first nine games of this season, Smith had one lost fumble and four interceptions.

Seattle will be trying to snap a three-game home losing streak when it hosts the Jets on Sunday. Seattle has not lost four straight at home since 2008.