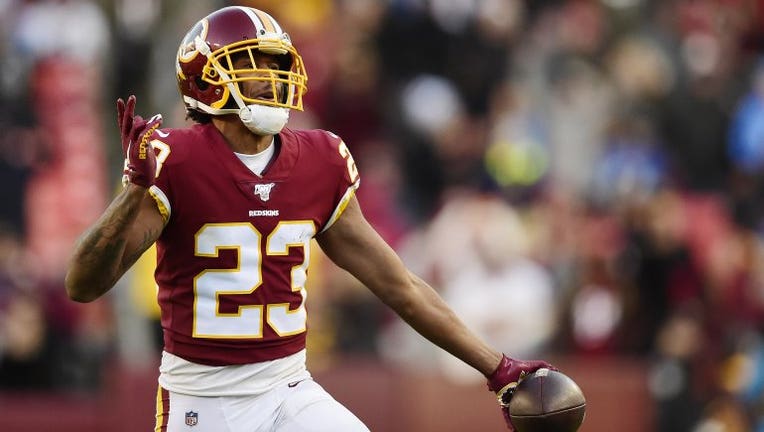 LANDOVER, MD - NOVEMBER 24: Quinton Dunbar #23 of the Washington Redskins celebrates after intercepting a pass by Jeff Driskel #2 of the Detroit Lions in the second half at FedExField on November 24, 2019 in Landover, Maryland. (Photo by Patrick McDe

A player on the Commissioner Exempt List cannot practice or play in games but does get paid. He can be at the team’s facility “on a reasonable basis” for meetings, individual workouts, therapy, rehab and other non-football activities if given team permission.

Baker and Dunbar were attending the cookout in May when a fight broke out, and Baker pulled out a handgun, an arrest warrant said. Baker, Dunbar and two other men began robbing people of thousands of dollars, watches and other valuables, witnesses told investigators.

Each player was released after posting bond. The players’ lawyers said they have witnesses who will clear them.

Commentary: Legal process aside, Dunbar is guilty - of creating a major headache for Seahawks

The same week, Latimer was arrested and charged with a felony count of illegal discharge of a firearm. The Douglas County sheriff’s office said deputies arrested the 27-year-old after responding to a report of shots fired inside an apartment in the Denver suburb of Englewood, Colorado.

Latimer also faces charges of second-degree assault, menacing, prohibited use of a weapon and reckless endangerment. He was also released after posting bond.

Baker, 22, was one of three first-round draft picks the Giants had last year. He played in all 16 games, starting 15, and had 61 tackles.

The team moved on from Dunbar for financial reasons after he requested a new contract.

“I just felt that as the situation progressed, he was looking for something that we weren’t prepared to give,” first-year coach Ron Rivera said. “He had a year left on his contract. We didn’t know him and just felt that because of that situation and circumstances — his agent and his attitude just didn’t seem to change — we just felt that we were going to move in another direction.”

Latimer signed with Washington in March after two years with the Giants and four years before that with the Broncos.