Seahawks fans will not be cheering from CenturyLink Field for at least the first three home games.

RENTON, Wash. - Chris Carson is trying his best not to get caught up in the future.

It’s not easy when a regular topic of conversation is what will happen to the Seattle Seahawks’ bruising running back when his rookie contract expires after this season.

Carson said there haven’t been talks about his future with Seattle as of yet.

Overlooked coming out of Oklahoma State and drafted in the seventh-round, Carson has developed into one of the top backs for a team that prides itself on running the ball, and in a league that seems to be devaluing running backs.

On the Seahawks’ side, there are questions about how much the team might want to invest in a back who has suffered season-ending injuries twice in three years.

Right now, Carson is healthy, although he’s had to cope with the mental strain during training camp of having to spend time away from the team following deaths in his family.

“He looks great. He hasn’t had a snap out here that he didn’t look good,” coach Pete Carroll said. “We don’t have any hesitation with Chris at all. He’s fine and ready to go.”

His 2019 season was cut short after he suffered a hip fracture late in the regular season. Before he got hurt, Carson had rushed for a career-high 1,230 yards — fifth in the league — and seven touchdowns. 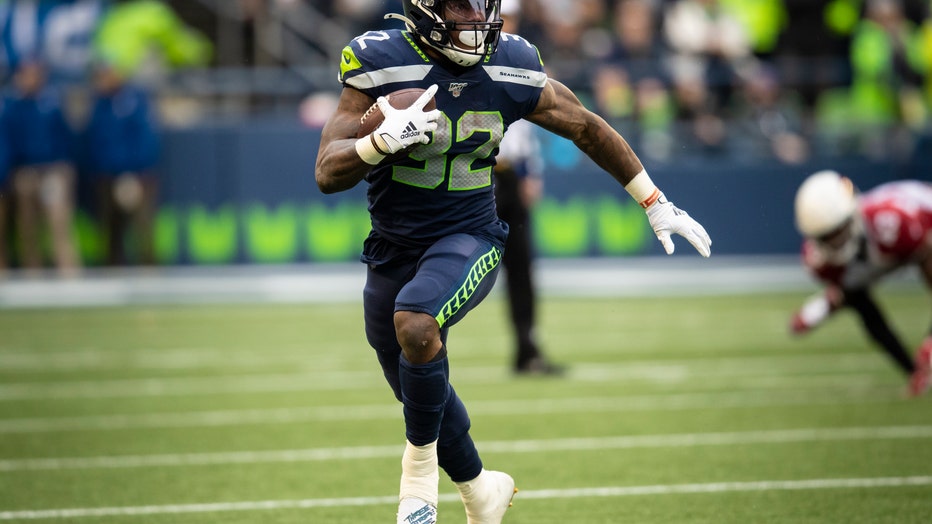 SEATTLE, WA - DECEMBER 22: Running back Chris Carson #32 of the Seattle Seahawks rushes the ball during a game against the Arizona Cardinals at CenturyLink Field on December 22, 2019 in Seattle, Washington. The Cardinals won 27-13. (Photo by Stephen

But it was the second time in Carson’s career that he didn’t finish a season. Carson’s rookie season in 2017 ended after just four games due to a fractured leg.

When healthy, Carson has been great. But he’s also been knocked around during his three seasons.

“Just being a seventh-round draft pick you are always gonna have that chip on your shoulder,” Carson said. “But I know at this point in the game I don’t really have nothing to prove.”

Carson should have help in the backfield again this season after Seattle signed veteran Carlos Hyde in free agency. The Seahawks also hope to get Rashaad Penny back around midseason from a torn ACL suffered late last year. And there is depth with second-year running back Travis Homer and rookie Deejay Dallas, who has impressed in camp.

Last year, Carson averaged just over 18 carries per game. That would seem to be a good target number for Seattle’s offense, depending on whether the Seahawks let Russell Wilson take a little more control of the offense through the air.

Another strong season may land Carson a worthy pay day. The unknown is whether it will be in Seattle.

“I guess we’re going to have to see,” Carson said.

NOTES: DE Benson Mayowa, WRs John Ursua and Phillip Dorsett and CB Tre Flowers were among players returning to practice Tuesday after sitting out a few days. ... CB Shaquill Griffin and OTs Duane Brown and Cedric Ogbuehi all sat out.