TAMPA BAY, Fla. -- Sunday was rough not only for the Seattle Seahawks, but also for the entire NFC West -- all four teams lost.

The Seahawks (7-3-1) struggled to get any offense going, totaling just 245 net yards, with 118 through the air from quarterback Russell Wilson, who finished the game 17-of-33 and passed for just 151 yards. He had no touchdowns and threw two interceptions.

Evans scored on receptions of 3 and 23 yards in the opening quarter, a grieving Alterraun Verner had one of two interceptions off Wilson, and the Bucs sacked the Seattle quarterback six times.

The Bucs (6-5) have won three straight to climb back into contention for a playoff berth. In addition to stopping Seattle's three-game winning streak, they remained one game behind first-place Atlanta in the NFC South.

Playing two days after the death of his father, Verner picked off Wilson to stop a promising drive in the final minute of the opening half. The reserve cornerback was embraced on the sideline by teammates, who continued to play inspired defense in the second half.

Bradley McDougald had the other interception off Wilson, who had thrown two in 335 attempts this season entering Sunday. Lavonte David returned a fumble 53 yards, ending another promising Seattle drive in the fourth quarter.

Winston completed 21 of 28 passes for 220 yards and one interception. Evans had eight receptions for 104 yards, and Doug Martin rushed for 87 yards on 23 attempts for the Bucs.

Wilson finished 17 of 33 for 151 yards. The Seahawks were held to 1-yard net passing in the first half, when Wilson was sacked four times for 19 yards in losses.

The Seahawks played without Earl Thomas, stopping a streak of 106 consecutive regular-season starts for the star safety, who had never missed an NFL game. Starting cornerback DeShawn Shead, who also suffered a hamstring injury during last week's victory over Philadelphia, also sat out, leaving the Seattle secondary vulnerable.

The Hawks struggled on third-down, going 1-for-11 on the day. Wilson was sacked a season-high six times.

The Seahawks are looking forward to returning to CenturyLink Field next weekend to take on the Carolina Panthers. 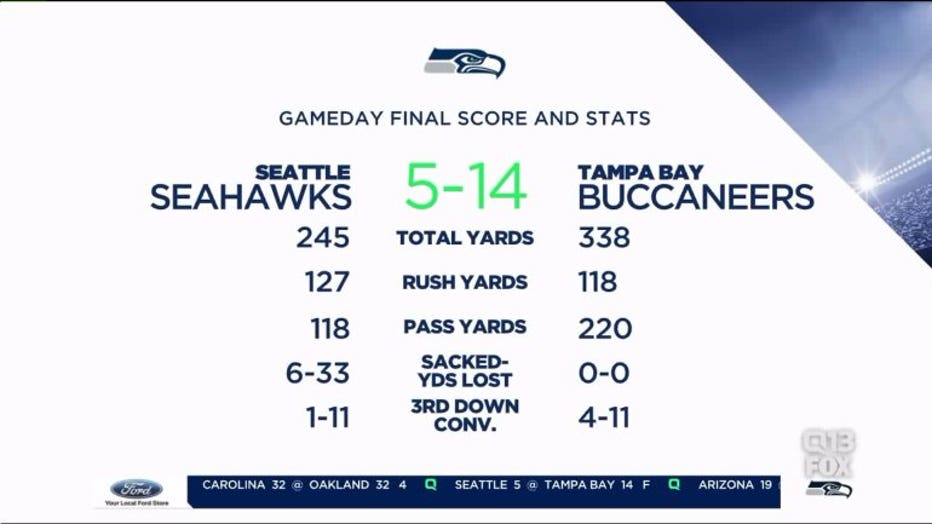