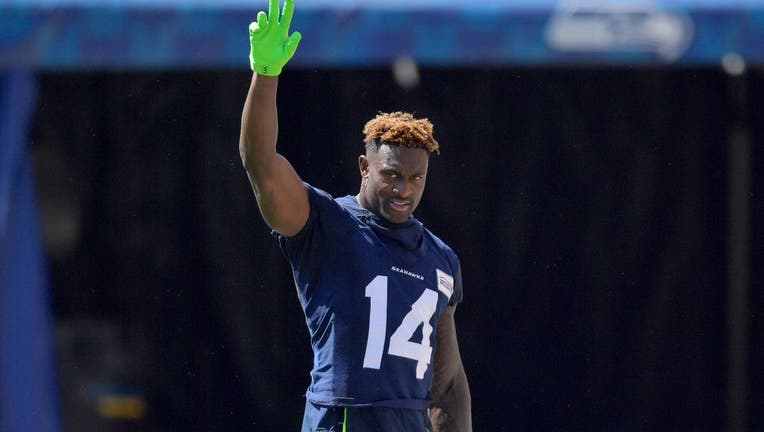 RENTON, Wash. - The quarterback battle between Geno Smith and Drew Lock got underway in earnest, wide receiver DK Metcalf didn't participate as he awaits a new contract, and linebacker K.J. Wright signed a one-day deal with the team to retire as a member of the organization on a busy first day of training camp for the Seattle Seahawks.

Here are the biggest items from day one of Seahawks Camp:

Head coach Pete Carroll will not give any indication of how long the battle between Smith and Lock will be able to continue before settling on a starting quarterback for this season. But in the meantime, Smith and Lock will be in full competition to earn the job for the season opener against Russell Wilson and the Denver Broncos.

Smith, as expected, took the first snaps under center while splitting time with Lock with the first unit offense.

While the Seahawks haven't had a quarterback competition in a decade, it's a reality Carroll was quite familiar with when he coached in college at USC. Adapting to new quarterbacks was just the reality of the game when players graduated after 3-5 years.

"I coached in college for quite a while and guys graduated all the time," Carroll said Wednesday. "Heisman Trophy winners graduated, you know, and you went to the next guy. You always miss when the guys leave, but, you know, you can see it and so you start planning for it and you work and you can find success. Whether it's Carson Palmer or Matt Leinart or John David Booty or Mark Sanchez, all those guys that played for us at one all those games. So I've taken it in stride, but I'm real determined to make it work."

Smith has the lead position in the race because he's played in offensive coordinator Shane Waldron's system for a year already and has rapport built with most of the pass targets already in place. Lock, acquired in the Wilson trade in March, is having to catch up. Lock said at the end of the offseason program that he felt comfortable with the playbook and had come a long way since the day he was traded. Now he'll get the chance to show it throughout the camp battle.

"There's a lot of developing of the players, you know, and giving them the background they need and the substance they need to be able to play like they're capable. This is a hard, hard frickin position to play. It's so demanding. And fortunately, we've got guys who are talented," Carroll said.

"Geno, we've known that for years that he was talented and he was playing behind Russ. When he had his chance last year to get going -- he'd been on ice for quite a while --  he does some great things and we can see it and so we saw it through the offseason as well. Drew had a very, very good offseason with us. He's just behind in the learning and so he's catching up, but he's a really talented football player. They're not exactly the same, but they're both big guys that can throw and run. So we're just gonna have to wait to see what happens.

"Geno’s in the lead right now and he’s ahead and so he ain't looking back. He’s going for it and Drew’s not going to take a back seat."

Wide receiver DK Metcalf reported for training camp and passed a physical after offseason surgery to address a foot injury that plagued him through last season. But instead of practicing, Metcalf stood by in a baseball cap and watched.

Metcalf – entering the final year of his rookie contract with Seattle – is seeking a new deal from the team. He skipped the team's mandatory mini-camp in June as well as he attempts to leverage a new contract from the Seahawks.

"We're working and I don't have any update for you. But we're working," Carroll said.

Metcalf is set to earn $3.9 million in the final year of his contract. However, the top of the wide receiver market has jumped significantly this offseason with Tyreek Hill ($30 million/year), Davante Adams ($28 million/year), and college teammate A.J. Brown ($25 million/year) getting new contracts. Metcalf's numbers are deserving of joining that echelon as well.

Carroll and the Seahawks have said repeatedly they want Metcalf as part of their long-term future. Carroll has been optimistic that a deal will eventually get done. But as of yet, it hasn't. Therefore, Metcalf remains a spectator.

"We were hoping so," Carroll said of having the deal done before training camp.." We're hoping so. We shot for it, you know, but we're right there now. And there's a lot of work being done, like, right now."

Linebacker K.J. Wright signed a one-day contract with the Seahawks so that he could retire as a member of the organization he played with for 10 of his 11 seasons in the NFL.

Wright played last season for the Las Vegas Raiders after being released by Seattle to give Jordyn Brooks the path to play at Wright's former spot. Wright said earlier this offseason that he would only play for the Seahawks or he would retire.

"It was real emotional. It really was. It was emotional for all of us," Carroll said of Wright signing the contract. And it was a big deal for K.J. to finally put his name on the dotted line there for the last time. There was a moment there where we're looking at 11 seasons and 230 games and all the years that he played. He was just trying to suck it up and absorb it and he just got emotional about it like you think he should, and would."

Wright played a total of 161 games in the NFL with 144 of those games coming with the Seahawks over 10 seasons.

"He's a fantastic kid, and been a remarkable leader and performer and all that," Carroll said. "But he's even above all of that, he's a remarkable person and I hope that we can always keep him close to the program. And I'm really glad that he's in the area living here. And we have a bunch of guys that do live here. And I'm glad that he's kind of still in the fraternity of it all. So I hope we'll be able to do more work with K.J. in the future."

The Seahawks released running back Chris Carson on Tuesday with a failed physical designation as a neck injury sustained last season will end his football career.

Carson worked hard after having surgery late last year to try and get cleared to return to action. However, he was unable to get the needed range of motion back to continue his career.

"It was a shame," Carroll said. "Through all the whole offseason, we're talking to Chris the whole time, you know, and we're all trying to keep a really good thought that it was going to maybe come through and change it, and each one of the market days, you know, that we took note it didn't change and he didn't get better. And so the last time that we hit it was probably about a month ago and he hadn't made any progress and so he's had some time to process this that it's coming. So he worked like crazy to do it. He was going for it the whole way. And but as he said yesterday, you know, I've had time to deal with it. I'm OK about it now and so he's moving ahead."

Carson had surgery to fuse a disc in his neck that was causing him ongoing discomfort. Despite appearing in just four games last season, Carson spent many weeks trying to get back on the field without success. Ultimately, it was decided that he needed to have surgery. He was still having issues with flexibility and range of motion, Carroll said, as of June when mini-camp wrapped up.

"Pretty much heartbroken because like, I don't even think it really hit any of us," running back Rashaad Penny said of Carson's necessary retirement.

"He deserves all these flowers after all the stuff he does. He set the standard of who a running back is for the Seahawks. So I mean, we all just follow, you know, what he kind of did. I think me coming in and me having him around, It made me a better player.

"We're really close. Like, that's my guy. Anything I ever need as far as football and just life in general, I always went to him. He gave me the utmost and positive feedback. And, you know, I know personally, I'm gonna miss him. I know everybody else will and everybody else feel the same way about who he is as a person. I think that's more importantly, what I'm gonna miss."