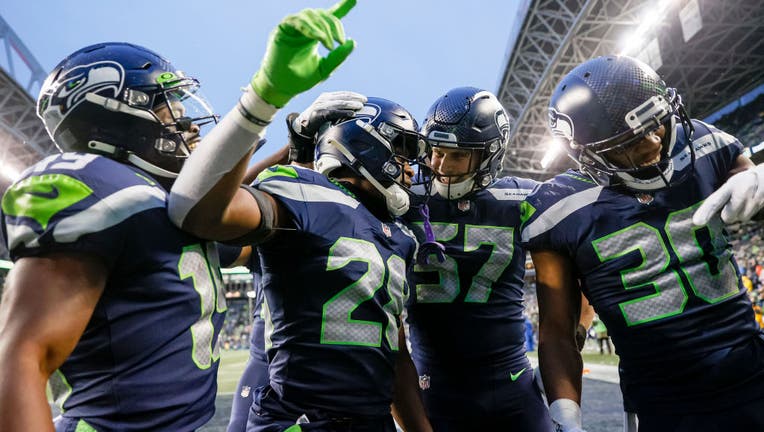 SEATTLE, WASHINGTON - JANUARY 02: Ugo Amadi #28 of the Seattle Seahawks celebrates his interception with teammates during the fourth quarter against the Detroit Lions at Lumen Field on January 02, 2022 in Seattle, Washington. (Photo by Steph Chambers

The first regular-season National Football League game to be played in Germany will feature the Seattle Seahawks and Tampa Bay Buccaneers.

The Seahawks announced they will play the Bucs on Nov. 13 and the game will kick off at 6:30 a.m. PT in Munich.

Earlier this year, the NFL announced the Buccaneers would play an International Series game in Munich, Germany, during the 2022 season.

"We look forward to participating in the first regular season NFL game in Munich, Germany later this fall as part of the International Series," said Buccaneers Owner/Co-Chairman Joel Glazer. "This historic game will play a crucial role in the NFL's efforts to grow its international footprint while allowing us to directly engage NFL fans in Germany."

The game will be played at Allianz Arena, where FC Bayern Munich plays.

This will be the Seahawks' second trip to Europe in five seasons, having played in London in 2018 for a Week 6 win over the Raiders.

Fans who are interested in attending the game in Munich and want to receive more information can click here.

Last year, as part of the League's expansion of the regular season to 17 games, it was determined that, beginning with the 2022 season, up to four of the teams from the conference whose teams were eligible for a ninth regular-season home game would instead be designated to play a neutral-site international game each year, according to a news release.

It will be the second regular season game for the Seahawks to be played outside the United States. The Seahawks played the Oakland Raiders at Wembley Stadium in London during the 2018 season. Seattle won that contest 27-3.