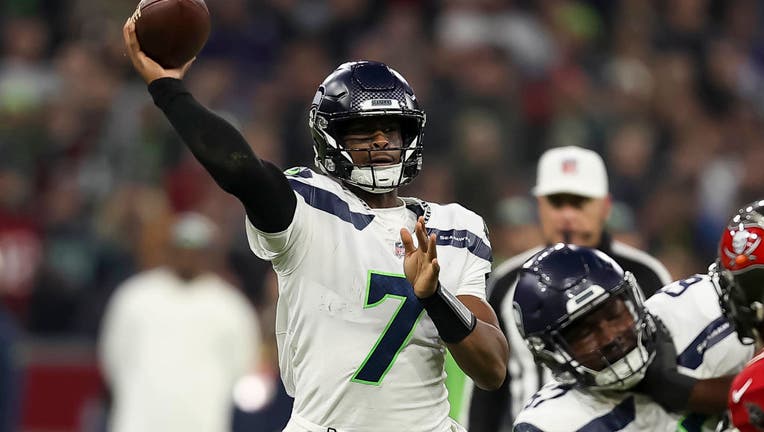 MUNICH, GERMANY - NOVEMBER 13: Geno Smith of Seattle Seahawks controls the ball during the NFL match between Seattle Seahawks and Tampa Bay Buccaneers at Allianz Arena on November 13, 2022 in Munich, Germany. (Photo by Roland Krivec/DeFodi Images via

SEATTLE - The first introduction Quandre Diggs received to the personality of Geno Smith came on a Saturday night in October in Austin, Texas, a decade ago.

Smith was confident, cocky and carried himself with a swagger to match as the then-quarterback for West Virginia. He talked trash and then backed it up with how he played on the field. In that game, Smith threw four touchdowns in a 48-45 win for West Virginia.

"You guys can go look at the video, how he was throwing the Horns down and talking trash to me and all type of stuff," Diggs recalled. "I’m just like, ‘All right, bro.’ But that’s just who he was. He was a Heisman candidate at the point. So, he had the right to do his trash talk."

Fast forward 10 years and some of that confidence and swagger that Smith showed in those college moments have returned.

It’s a more mature version, molded and shaped by a decade of NFL hardship. But now that Smith is thriving, with a season to date that’s among the best of any quarterback in the league so far this season.

He has earned the right to let some of that swagger resurface.

"I think it’s a mixture of talent and mental stability. I think those things are coming into a good combination right now," Smith said. "I’ve always had those two things, so it’s more so just me being in the light versus doing it in the shadows."

The Seahawks arrived at their bye week at 6-4 following their 21-16 loss last Sunday to Tampa Bay in Munich, Germany. They are leading the NFC West by a half-game over San Francisco after 10 games, which is a prediction no one would have made before the season.

While there are plenty of reasons behind Seattle’s surprising season so far, the play of Smith is at the top of the list. It hasn’t been perfect, as evidenced by some struggles in the first half last week against Tampa Bay. But it has been far better than anyone expected.

Before the season began, no position for Seattle was viewed as a bigger weakness than quarterback. After a decade of Russell Wilson in charge under center for the Seahawks, the situation Seattle faced with either Smith or Drew Lock as its quarterback option was seen as the biggest hinderance for a team that seemed to be entering a rebuilding season.

There has been a lot of apologizing for many of those preseason takes in the days and months that have followed with how Smith has played.

Smith had essentially been cast aside as a punchline still remembered for his foibles with the New York Jets — remember the locker room punch? — and for being the quarterback called upon that ended Eli Manning’s consecutive games played streak with the Giants.

But Smith said that entire time he was learning. His patience and willingness to wait for another opportunity to emerge might be his best quality as a quarterback.

The first 10 games of this season have shown what he learned during that time as a backup. The next seven will likely define where his career goes from here. As a free agent after the season, Smith could be in line for a payday that seemed unfathomable before the season.

He’s making $3.5 million this season in the bargain of all quarterback bargains based on his play. Next year, there are likely to be another set of zeros behind that number, whether Smith is in Seattle or has moved on elsewhere.

The rest of this season likely decides how big that paycheck ends up being.

"We’re in the middle of the season, and we’re doing the things we need to do. But there’s a conversation that’s coming," Carroll said. "We understand that. Really, really pleased with our guys and think they’ve done a great job. Geno’s having a fantastic season."