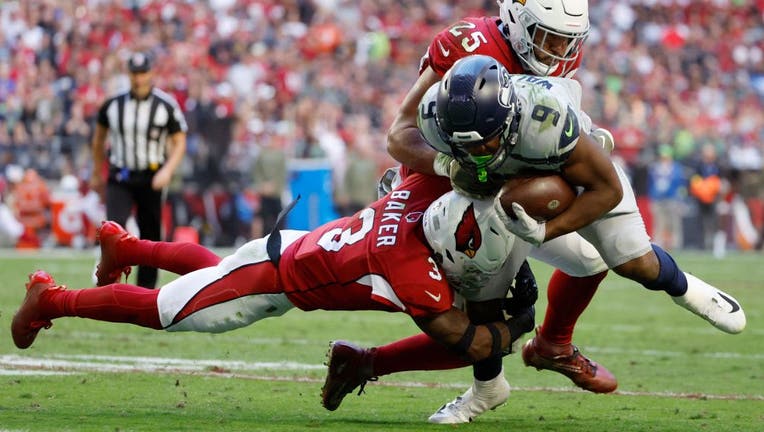 GLENDALE, ARIZONA - NOVEMBER 06: Kenneth Walker III #9 of the Seattle Seahawks is tackled by Budda Baker #3 of the Arizona Cardinals in the third quarter of the game at State Farm Stadium on November 06, 2022 in Glendale, Arizona. (Photo by Chris Cod

Walker and Dallas both sustained ankle injuries in Sunday's 27-23 victory over the Los Angeles Rams. The injuries left Seattle with just one healthy running back in Tony Jones Jr. as Travis Homer was inactive due to a knee injury and illness.

Injuries to running back have become a regular issue for the Seahawks to handle when the calendar turns to December. Thomas Rawls fractured his ankle late in the 2015 season. Eleven different running backs took carries for the Seahawks in 2016, Chris Carson, C.J. Prosise and Rashaad Penny all sustained season-ending injuries in 2017 that led to Marshawn Lynch coming out of retirement to lend a hand.

While the injuries to Walker, Dallas and Homer aren't as significant as some of those previous ones, it does create some problems for the Seahawks this week ahead of their game with the Carolina Panthers on Sunday.

"Homer looked good today in the walkthrough," head coach Pete Carroll said. "He’s going to practice today. That’s a real positive for us. We won’t practice Kenny or DeeJay today. We will hold them back."

Jones hadn't had any offensive snaps for the Seahawks until Sunday's win over the Rams. He had seven carries for 14 yards and two receptions for 18 yards in his first action for the team as Walker was sidelined and Dallas played sparingly due to injury.

Carroll was happy with what Jones was able to give them in Los Angeles.

"He’s really aggressive," Carroll said. "He’s a downhill guy. He runs strong. He catches the ball really well. He’s a good pass pro guy. He can do everything. He has a good style about him, physical, aggressive style."

Carroll said it's still unclear if Walker will make it back to play this week.

Walker was injured in the second quarter of the win over the Rams. He exited the game after a run carried him out of bounds with a hard plant on his foot before running out of bounds.

"He's got an area of his ankle that sort of jammed and so there's some strained tissue in there, but it's not an ankle sprain," Carroll said of the injury Monday afternoon. "It's not a high-ankle sprain. It's not a lateral ankle sprain like we normally report on. It's different than that."

Dallas' injury is an ankle sprain, however. He was also injured in the second quarter but managed to play several snaps in the second half to give Seattle a second option in the backfield when Jones was winded.

"I really appreciate him because without him, then I'd have been out there the whole game dying, breathing, gasping for air," Jones said of Dallas. "That game shows what kind of player he is, a gritty player."

Carroll said that Dallas believes he can play this week

"If you talk to him, he does (have a chance to play)," he said. "He was kind of bouncing around today. So, he didn’t take any snaps in walkthrough, but his attitude is exactly what you want. He’s determined to get back. So, we’ll see what happens."

The Seahawks signed veteran Wayne Gallman to the practice squad on Tuesday to supplement Darwin Thompson and Godwin Igwebuike as running backs on the squad. Thompson has been a call-up to play earlier this season and would be the likeliest candidate for a promotion should more running back depth become necessary this weekend.

Gallman had only seen a couple plays in walkthrough before Carroll met with reporters.

"He was about one out of three today running the plays the right way," Carroll joked. "We’ll give him a start. We’ll see what happens. He’s an experienced guy that has been around. He’ll pick it up quickly."

– Linebacker Jon Rhattigan is progressing well in his recovery from a knee injury that has kept him on the physically unable to perform list for the entirety of the season. He's in his final week of practice time with the team before he has to be added to the 53-man roster.

"He is ready to go," Carroll said. "We are really excited for Jon to be back in action. He’s looked great. He’s really been fast, and the process must have been on point because the day that he came back a couple of weeks ago, he was going. He could go, and he hasn’t backed off one step the whole time. We’re counting on Jon to help us."

The Seahawks have an opening on their active roster after placing safety Josh Jones on injured reserve with a hamstring injury. Rhattigan is a likely option for that spot by the end of the week. Any needed running back depth can come from practice squad elevations instead.