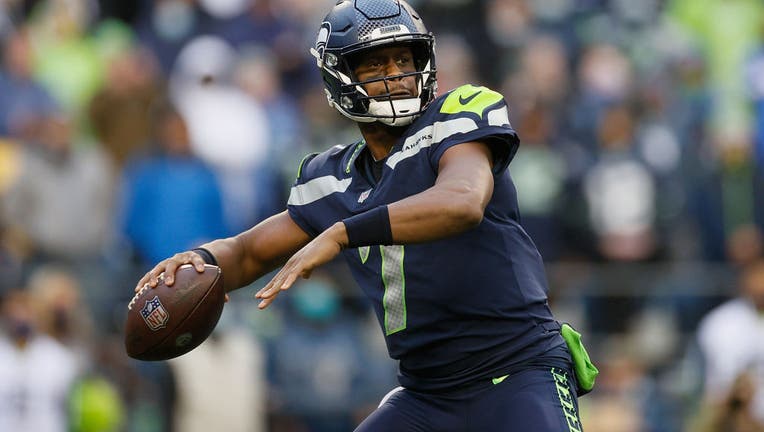 SEATTLE, WASHINGTON - OCTOBER 25: Geno Smith #7 of the Seattle Seahawks drops back to pass during the first half against the New Orleans Saints at Lumen Field on October 25, 2021 in Seattle, Washington. (Photo by Steph Chambers/Getty Images)

RENTON, Wash. - The Seattle Seahawks officially announced the re-signing of quarterback Geno Smith and eight additional restricted free agents on Monday ahead of the start of their offseason program.

Per Adam Schefter of ESPN.com, Smith's deal is worth $3.5 million for one year with just $500,000 fully guaranteed. The deal includes an additional $3.5 million available through incentives.

With the Seahawks' offseason workout program beginning on Tuesday, players are returning to team headquarters to sign their deals.

Smith, 31, appeared in four games for the Seahawks last season with three starts in place of an injured Russell Wilson. He completed 68.4 percent of his passes for 702 yards with five touchdowns and an interception.

Haynes, 26, is a former fourth-round pick in 2019 that has played in just seven games in three seasons due to injuries. Haynes has played well when he's been available, including two starts made last season.

Mone, 26, has become a regular fixture along Seattle's defense line as he's played in 24 games over the last two seasons with five starts last year.

Neal, 26, has played in 29 games over the last two seasons with nine starts at safety. Neal has 93 tackles over that span with two interceptions and a sack.

Muse, 25, was a third-round pick of the Las Vegas Raiders in 2020. The Seahawks signed him to their practice squad last September after he was released by the Raiders after only one season.

Reid was acquired in a trade with the Houston Texans during roster cuts last September.