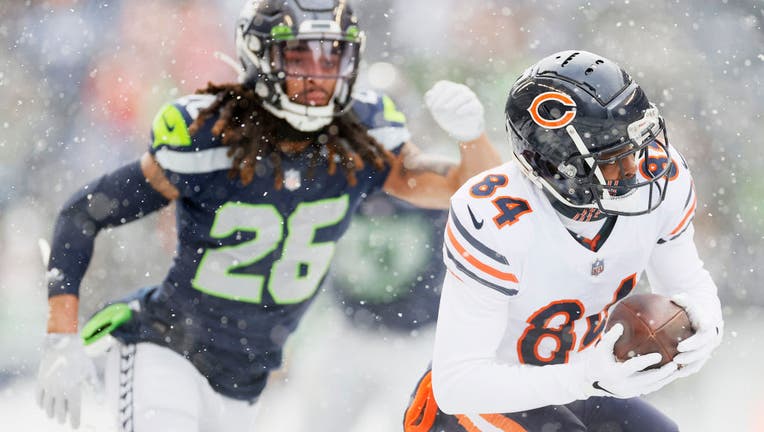 SEATTLE, WASHINGTON - DECEMBER 26: Marquise Goodwin #84 of the Chicago Bears catches the ball as Ryan Neal #26 of the Seattle Seahawks defends during the second quarter at Lumen Field on December 26, 2021 in Seattle, Washington. (Photo by Steph Chamb

Goodwin, 31, played in 14 games for the Chicago Bears last year after opting out of the 2020 season due to the COVID-19 pandemic. He caught 20 passes for 313 yards and a touchdown.

"We have some background with him in that (receivers coach) Sanjay (Lal) has coached him before and they have a relationship that gave us real insights," head coach Pete Carroll said. "He's extraordinarily fast. He's a gifted athlete. Gosh, he came right out here day one and he still shows that he can fly. He's a real disciplined route runner, and he's also a guy who's played all the spots. So I'm thinking that he will add something with what he brings athletically but also his background and his makeup and his versatility."

Prior to opting out in 2020, Goodwin played four seasons for the Buffalo Bills and three for the San Francisco 49ers. His best season came with the 49ers in 2017 when he caught 56 passes for 962 yards with two touchdowns.

Goodwin was a third round pick of the Bills in 2013 out of Texas with his speed as his best attribute. He ran a 40-yards dash in 4.27 seconds at the NFL Combine in 2013, which makes him one of few athletes that have broken the 4.3-second barrier in NFL testing.

"I'm excited," Carroll said. "Any time somebody brings something unique, which this guy is historically really, really fast. We've played against him and we have respect for him from all of that. So we really thought seriously about drafting him way back when and so happy to get done."

The signing of Goodwin feels somewhat similar to Seattle signing Phillip Dorsett in 2020. Dorsett was also a speed receiver Seattle was hoping could stretch opposing defenses. A foot injury kept him from playing for the Seahawks in 2020. He did appear in games for Seattle last year after re-signing with the team's practice squad after being released by the Jacksonville Jaguars.