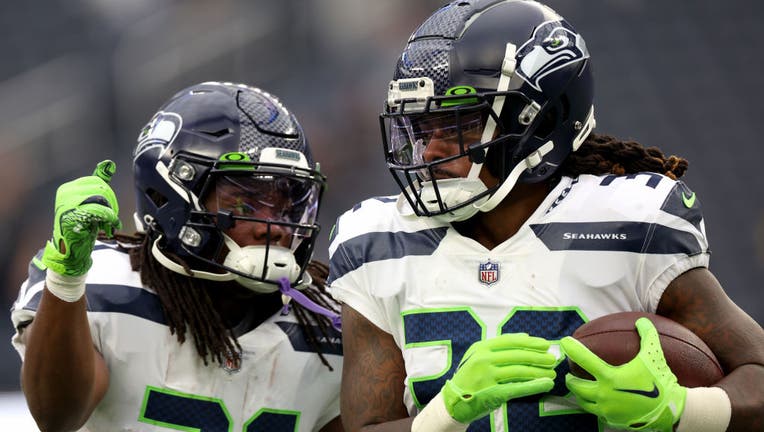 INGLEWOOD, CALIFORNIA - DECEMBER 04: Tony Jones Jr. #32 and DeeJay Dallas #31 of the Seattle Seahawks warm up before the game against the Los Angeles Rams at SoFi Stadium on December 04, 2022 in Inglewood, California. (Photo by Harry How/Getty Images

Jones has played in four games for the Seahawks this year after being signed off the New Orleans Saints practice squad in October. He's had eight carries for 16 yards and three receptions for 18 yards in his action for Seattle.

Jones can provide some additional running back depth for the Seahawks as backup DeeJay Dallas is battling a high-ankle sprain and quadriceps strain and was limited in practice during the week.

Cade Johnson caught two passes for 21 yards last week against the Los Angeles Rams as he saw the most significant action of his career. The two receptions were his first in the NFL as he saw the third most receiver snaps over Dareke Young and Laquon Treadwell.

Alexander Johnson played 16 snaps against the Rams in his first action with Seattle last week. Johnson had 124 tackles for the Denver Broncos in 2020 but spent most of the year on the Seahawks' practice squad. He split linebacker snaps with Tanner Muse last week against the Rams following the loss of Jordyn Brooks to a torn ACL two weeks ago.

Mack did not appear in a game for Seattle. He was claimed off waivers from the Baltimore Ravens in late December and was inactive for each of the final two regular season games.