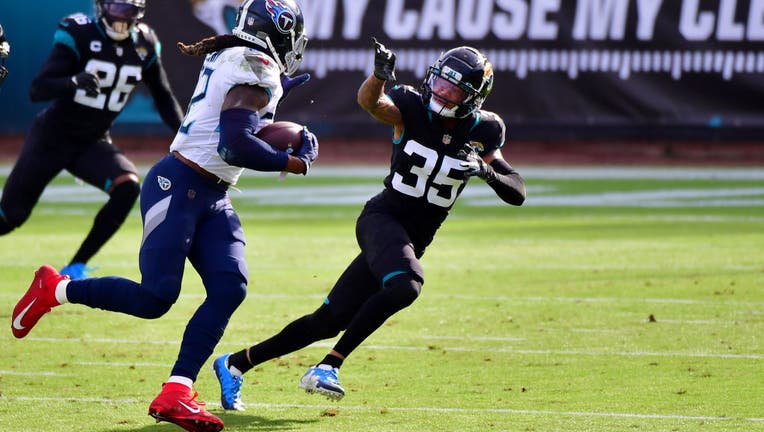 JACKSONVILLE, FLORIDA - DECEMBER 13: Derrick Henry #22 of the Tennessee Titans carries the ball past Sidney Jones #35 of the Jacksonville Jaguars at TIAA Bank Field on December 13, 2020 in Jacksonville, Florida. (Photo by Julio Aguilar/Getty Images)

Seattle’s cornerback position has emerged as one of the biggest unknowns for the Seahawks heading into the season. Jones is returning to the town where he was a star in college at Washington.

Jacksonville is expected to receive a late-round draft pick in the deal.

The 25-year-old Jones was a first-team all-Pac-12 selection his final season at Washington as part of a standout secondary that included Budda Baker and Kevin King. But his professional career hit a major roadblock before it started.

Jones tore his Achilles tendon in his left leg during Washington’s Pro Day in 2017. He was still taken in the second round by Philadelphia, but played just 10 total games his first two seasons with the Eagles.

Jones started four of 12 games in 2019 for Philadelphia before getting cut by the Eagles prior to the start of last season. Jones signed with Jacksonville and appeared in nine games for the Jaguars with six starts. He finished last season with nine passes defensed, two interceptions and 26 tackles.

Seattle was enticed by the ball skills and instincts that made Jones a star in college. At 6-foot tall, he also fits the size profile Seattle has typically wanted in the past, but he’ll be joining an unsettled position group.

Expected starter D.J. Reed has missed time during training camp with a groin injury, but returned to practice last week. Ahkello Witherspoon signed a $4 million, one-year deal in the offseason but appeared to get shuffled down the depth chart with inconsistent performances in practice and preseason games.

Veterans Tre Flowers and Damarious Randall also have been mixed in as starters during the preseason. And rookie Tre Brown suffered a knee injury in the second preseason game, leading to Seattle acquiring John Reid from Houston last week.