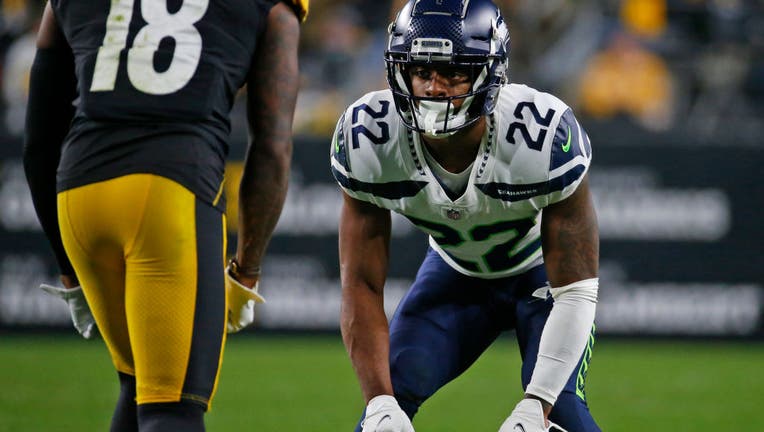 PITTSBURGH, PA - OCTOBER 17: Tre Brown #22 of the Seattle Seahawks in action against the Pittsburgh Steelers on October 17, 2021 at Heinz Field in Pittsburgh, Pennsylvania. (Photo by Justin K. Aller/Getty Images)

RENTON, Wash. - The Seattle Seahawks are getting some reinforcements from their injured ranks as they prepare for this Sunday's game against the 6-1 New York Giants.

Defensive end L.J. Collier was activated from the injured reserve list after practicing with the team for the last three weeks. Additionally, running back Travis Homer and cornerback Tre Brown returned to practice from their respective injury lists as well.

Meanwhile, wide receiver DK Metcalf is effectively day-to-day this week after sustaining an injury to his patella tendon Sunday in Los Angeles. Metcalf did not practice on Wednesday but did participate in the team's walkthrough session.

"He was out at walkthrough today," Carroll said. "He's not going to do anything (in practice). He feels a little better today. He's getting a little better so we just got to wait and see how he responds. … He's going to be real quiet for the next couple days and make sure we take care of him."

Metcalf landed hard on his knee on a first quarter target last week against the Chargers. It immediately knocked him out of the game as the Seahawks awaited further testing on the extent of the injury. An MRI showed an injury to his patella tendon that brought his status for this week into question, but was ultimately a positive report for his outlook.

For Collier, his 21 days of practice eligibility on the injured reserve list had expired and Seattle needed to add him to the roster or lose him for the rest of the season. Collier injured his elbow in a preseason scrimmage at Lumen Field in August and then hurt his thumb in practice two weeks ago.

The former first-round pick hasn't had the impact Seattle had hoped for during his first three seasons with the team. After starting all 16 games in 2020 for the team, Collier was inactive for seven games last year and was relegated to a backup role. But with a heavy run team in the Giants ahead this weekend, Collier could provide some additional depth on the defensive line of scrimmage.

Brown returned to practice on Wednesday for the first time since sustaining a torn patella tendon last November. He's been on the physically unable to perform list since the start of training camp.

"I've watched him work out in his rehab work and he's been flying around. He's ready to go. And he's been chomping at it for a couple of weeks now but they really wanted to make sure. We haven't seen him on the field yet. He was in walkthrough today. I'm so excited to see him back out here," Carroll said.

Brown had worked his way into the starting lineup for Seattle last year. He made three starts and appeared in five games in total before the injury ended his rookie year.

"Remember when he left he was playing darn good football," Carroll said. "He had just started to make his impression about how he was really consistent. He was tough. He was competitive on the ball. He was really consistent and kept showing it in practice, very much like Michael Jackson has done.

"So in my mind I'm picking up where we left off and away we go and let him start battling and see where he fits in with it with the competition. He'll make us better for sure. And I just hope he can stay healthy and stay up there and it works out for him."

Homer has missed the last four weeks after injuring his ribs on his only carry against the Atlanta Falcons.

Both Brown (on PUP) and Homer (on injured reserve) will be able to practice with the team for 21 days until they need to be added to the roster.

Guard Gabe Jackson is back to practice after missing the last two games with hip and knee injuries.

"He's going to practice today. Ready to go. He's gotta make it through the days but he should be ready to go," Carroll said.

Guard Phil Haynes, Jackson's replacement, and linebacker/fullback Nick Bellore did not practice on Wednesday as they recover from concussions sustained against the Chargers.

"Phil's practicing today," Carroll said ahead of practice, though he didn't officially get any work per the team report. "He's going to get some work today. And Nick's here with us. He's running around a little bit, but I think they're going to give him another day before we know. I think he's going to get some activity though. We'll see what he can do today. So both guys have a chance."

Cornerback Sidney Jones IV was back to limited participation after missing Sunday's game with a groin injury.

"He's coming back out to try today. So he's been in and out. He hasn't been 100 percent," Carroll said. "Sidney is handling it and wants to get out there. When he was up and active we put him in games because he deserves to play and is a good football player. He could start for us still. That's how good he is. So we'll see how it goes but he's got to get through practice and feel good about it."

Wide receiver Penny Hart won't make it back this week as he continues to recover from a hamstring strain.

"Penny won't make it this week," Carroll said. "We met about it. He's pushing so hard at it he's almost holding himself back a little bit. We're gonna take one more week and then next week we think he'll really have a chance to come back."

In addition to the moves with Collier, Brown and Homer, the Seahawks re-signed wide receiver Kevin Kasiss to the practice squad and added former Denver Broncos linebacker Alexander Johnson.

Kasiss was with the team and training camp and spent time on the practice squad earlier this season.

Johnson played the last four seasons for Denver, appearing in 38 games with 34 starts for the Broncos. He had 124 tackles in 2020 and will help bolster Seattle's linebacker depth, He's also very familiar with the Seahawks' scheme having playing under Vic Fangio the last few years with the Broncos.

Walker was named as the winner for Week 7 after rushing for 167 yards and two touchdowns against the Chargers on Sunday. He had been credited with 168 yards after the game with an NFL stat correction moving the final total to 167.

Walker beat out Josh Jacobs of the Las Vegas Raiders for the award. Jacobs rushed for 143 yards with three touchdowns in their win over the Houston Texans.