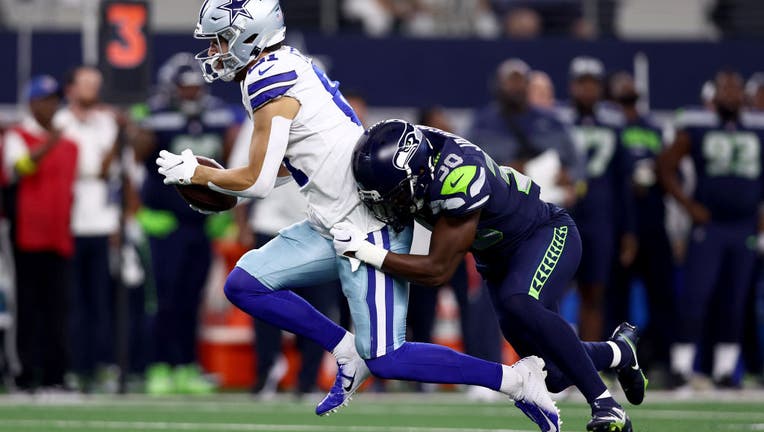 ARLINGTON, TEXAS - AUGUST 26: Wide receiver Simi Fehoko #81 of the Dallas Cowboys carries the ball against cornerback Mike Jackson #30 of the Seattle Seahawks in the first quarter of a NFL preseason football game at AT&amp;T Stadium on August 26,

The preseason is now over following the Seattle Seahawks’ 27-26 loss to the Dallas Cowboys on Friday night.

Decisions on the final roster spots will need to be made over the weekend ahead of a 1 p.m. deadline on Tuesday to reduce rosters from 80 to 53 players. This is our attempt to guess what the Seahawks roster will look like after those cuts are made after watching the last month of preseason practices and games.

Some things to note off the top:

-- There is no way to reasonably forecast any trades that could occur. So for this projection, we aren't including any guesses on that front.

-- The roster will be far from final. Teams can make waiver claims the day after players are released to add players released by other teams. A player added via waivers means another player must go to create room. Additionally, players initially kept on the active roster could be moved to injured reserve, which would create another opening to their re-fill. Then once those initial moves are made, another round of claims and cuts can occur.

So with all that being said, here's out projection for what the roster will be for the Seahawks after the 1 p.m. roster deadline.

Smith and Lock were always the two quarterbacks that would make the roster heading into the season. The only question was which one of the two would start. That question has now been answered.

There has been a pretty clear demarcation in the running back group before the top four backs and the rest of the roster. Penny has looked fantastic in camp despite a minor hamstring strain and a case of COVID-19 keeping him sidelined for stretches. Walker is working back from a hernia procedure but has looked fully capable. Dallas and Homer are proven depth options and special teams contributors.

This is another pretty clear position group, especially with Tyler Mabry sidelined this week with back spasms.

Lockett, Metcalf and Eskridge are locks for the roster. Goodwin made a solid case prior to a hamstring injury and his speed is a big plus. Young has been the more impressive of the two rookies alongside Bo Melton and his measurables would be more highly coveted should he be let go. Hart has been a consistent depth option that can play all three receivers spots and has been a constant on special teams units.

Freddie Swain has 38 catches for 502 yards and six touchdowns in two seasons for Seattle, but he’s just not done much of anything in camp or preseason games to standout. He has been the team’s primary punt return option and the Seahawks would need to feel confident in another option to not keep Swain, but Eskridge could be that option as he played there in the final preseason game against Dallas. Swain, Melton, Cade Johnson and Kevin Kassis would be considerations for the practice squad.

Not a ton of suspense with the offensive line. Either Lucas or Curhan will join Cross, Lewis, Blythe and Jackson as the starters. Haynes has shown to be a starting caliber option at guard as well. Fuller is the backup center. Forsythe seems the most likely piece to round out the group on the roster.

Taylor, Nwosu, Mafe and Robinson (if his left knee injury isn’t substantial) are locks for the edge rusher spots.

Smith is not likely to be ready for the start of the season due to ongoing hip issues. However, to get him to the injured reserve list, he needs to be kept on the initial roster. If Smith is going to miss time, Onujiogu has flashed enough to provide additional depth in the meantime. In order to get Smith to injure reserve, the Seahawks may need some roster manipulation, which we’ll address shortly.

This has been a really strong group throughout group and the top five have all been proven performers in the NFL. Former first-round pick L.J. Collier has been mostly a non-factor and an elbow injury in the mock game earlier this month has kept him sidelined ever since. As Clint Hurtt said earlier this week, it’s tough to "make the club in the tub" and Collier seems to be on the outs. Meanwhile, Adams has made a big push for a roster spot and had a strong performance in the preseason finale against the Cowboys that may have sealed a spot on the roster.

This is the most uncertain position group on the roster and could easily see some additions through roster cuts next week. Barton is set to start alongside Brooks in the two off-ball linebacker spots. Safeties Jamal Adams and Josh Jones have both played linebacker spots in practice in certain packages throughout training camp and will likely factor into the plan here as well. But beyond that, the depth is questionable at best. Nick Bellore has been the No. 3 linebacker in camp in addition to his dwindling fullback role and special teams duties. Muse, a former third-round pick of the Las Vegas Raiders, Joel Dublanko, Vi Jones and Lakiem Williams have been fighting for roles following the release of Joel Iyiegbuniwe.

Seattle could easily try and address the deficiencies here through trades, waivers claims, and free agent signings next week. In anticipation of that, we’re only keeping three on the roster for now, with a small caveat. Since Bellore is a vested veteran, he wouldn’t have to go through waivers if he is cut. The Seahawks may need to get Smith to injured reserve as well. Here’s predicting that Bellore is temporarily released for the necessary time to get Smith to injured reserve before re-signing Bellore for the start of the season. The Seahawks have done this move with Bellore previously in 2020 in order to get Phil Haynes to injured reserve in similar circumstances.

It would be a surprise if this position group didn’t look different next week.

Jones (concussion) and Burns (groin) were the starters in camp prior to their injuries. Bryant and Woolen both have flashed as rookies and Jackson has made a case with a strong preseason. Coleman or Bryant will be the nickel cornerback to begin the season.

Diggs and Adams are the starters in base defense with Jones having a really strong camp to earn a spot as well. Jones and Neal provide depth and flexibility to utilize three-safety looks at times. Blair is still coming back from two years of injuries and had some shaky tackling in the preseason, but he’s still got some upside and versatility.

No competition for any of these spots.

Rhattigan was already placed on the reserve/PUP list this week and Brown will likely join him there. Brown has not been able to get back to full speed yet after a patella tendon injury last November. Players on PUP will need to miss the first four weeks of the season before being eligible to return to the roster.