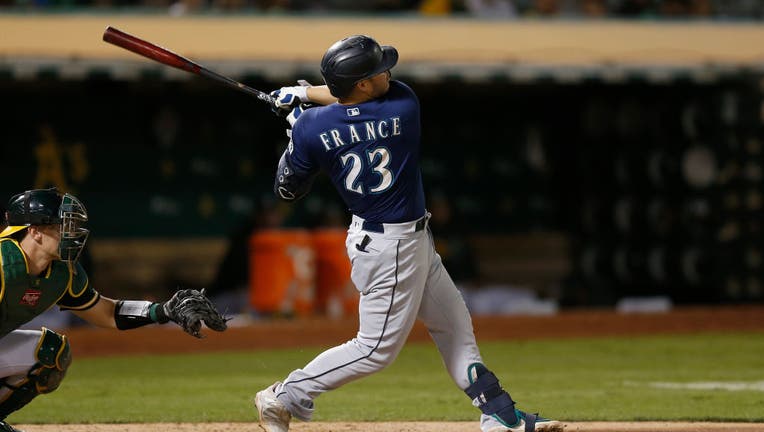 OAKLAND, CALIFORNIA - SEPTEMBER 22: Ty France #23 of the Seattle Mariners hits a solo home run in the top of the fifth inning against the Oakland Athletics at RingCentral Coliseum on September 22, 2021 in Oakland, California. (Photo by Lachlan Cunnin

Kyle Seager hit his 35th home run for a career-best 100 RBIs, Ty France also connected and the Mariners moved up in the playoff race, beating the Oakland Athletics 4-1 on Wednesday night for their fourth straight win.

Seattle topped the A’s for the third day in row to pull within 2 1/2 games of the Yankees for the second AL wild card. Oakland fell 3 1/2 back of New York.

"Won the series. I said along the way we might need to get a little lucky and sweep somebody, so we have a chance to do that tomorrow," Servais said. "We’ll see if we can get it done."

A’s manager Bob Melvin and bench coach Ryan Christenson were both ejected by plate umpire Greg Gibson in the top of the sixth during a strange sequence.

Melvin said he came out to inquire whether Gibson had called timeout after Seattle’s Jarred Kelenic stole second on a foul tip by Dylan Moore that was not caught. But there was no sign for a foul during the play.

Runners are permitted to steal on foul tips that are cleanly caught — in this case, the ball hit Moore’s bat and popped out of catcher Sean Murphy’s mitt and fell to the dirt.

Kelenic, likely thinking it was indeed a foul ball, then returned to first and was tagged out by Matt Olson.

Gibson, meanwhile, had signaled timeout, so Kelenic was put back at second.

Melvin became furious when Christenson was tossed first trying to communicate to Melvin he had seen a foul tip, but Gibson clearly thought Christenson was yelling at him. That meant third base coach Mark Kotsay moved into the active manager role.

"He said he did. I didn’t think he did," Melvin said of the timeout call. "And then in the meantime Rhino was telling me after talking to our replay that it was a foul ball and he thought he was talking to him and threw Rhino out. So I was trying to defend Rhino and tell him that he was telling me that it was a foul ball, not him, and I stayed out there too long. I shouldn’t have gotten thrown out but I was trying to defend Rhino."

Gibson declined to discuss the ejections.

In regard to the play in question, Gibson said pitcher Deolis Guerra had requested time.

"I thought he wanted a new ball. So when the pitcher held up time, I called time, because the pitcher had requested it," Gibson told a pool reporter. "That’s when the runner, for whatever reason, started running back to (first) base. The pitcher, he had asked for time and I granted time. The guy was at second base, so that’s why (he was allowed to stay)."

Chris Flexen (13-6) struck out eight and walked two, allowing one run on three hits over seven stellar innings. Diego Castillo pitched a 1-2-3 eighth then Drew Steckenrider finished for his 11th save.

Tom Murphy added an RBI single in the off Cole Irvin (10-14), who dropped to 0-4 lifetime against the Mariners with all four defeats in as many starts this year.

Matt Chapman homered in the fifth for the A’s.

"We have to win tomorrow," Melvin said. "After losing again tonight’s game now we fall behind them, tomorrow’s a really important game for us."

Oakland right-hander Chris Bassitt promised to return to the mound by season’s end following a frightening 100 mph line drive to the face at Chicago on Aug. 17.

He will get his chance in the series finale Thursday afternoon . Bassitt underwent facial surgery Aug. 24 to repair three cheekbone fractures from the injury.

"It’s been a little bit of a torture chamber," Bassitt said. "I’m happy to finally be back and, hopefully, help the team win."

Immediately after he got hurt, on a ball off from Brian Goodwin’s bat in the second inning of a 9-0 loss to the White Sox, Bassitt let Melvin and the medical staff know he absolutely planned to pitch again this year.

Athletics: RHP Daulton Jefferies was examined by team orthopedist Dr. William Workman and and MRI exam showed an elbow flexor strain. He will be sidelined for 2-3 weeks. ... INF Jed Lowrie is dealing with pain between the second and third bones in his right hand from an awkward swing and will be limited to hitting from the left side. ... DH/1B Mitch Moreland received a cortisone shot last week in his troublesome left wrist and is rehabbing in Oakland but it’s unlikely he would play again during the regular season. ... RHP Mike Fiers (sprained pitching elbow) allowed three runs — two earned — and four hits in 1 2/3 innings with no strikeouts or walks for Triple-A Las Vegas on Tuesday night in a rehab outing and still didn’t feel right. "He’s just had a tough year," Melvin said. ... RHP Trevor Rosenthal, who hasn’t pitched this year because of shoulder and hip issues, is set to be re-examined by the doctor who performed his hip surgery.