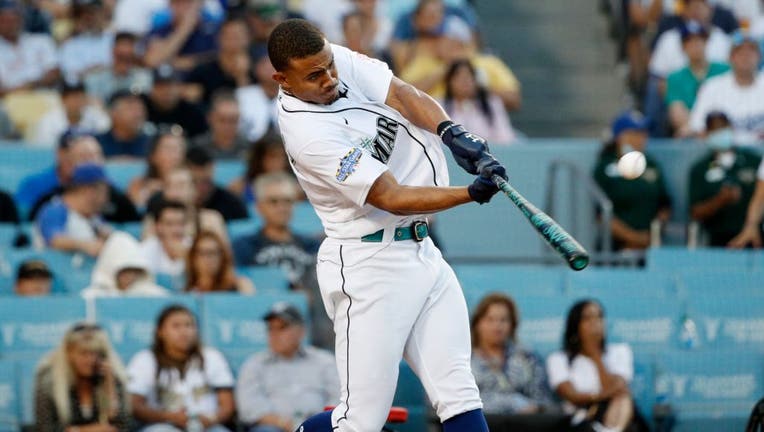 LOS ANGELES, CA - JULY 18, 2022: Seattle Mariners Julio Rodriguez connects for a home run in the finals of the Home Run Derby at Dodger Stadium on July 18, 2022 in Los Angeles, California. He came in second behind winner Juan Soto(Gina Ferazzi / Los

SEATTLE - Seattle Mariners manager Scott Servais said Monday that he is optimistic that Julio Rodríguez will be back in the lineup for Tuesday’s game against the Texas Rangers.

"Julio is doing better," Servais said. "Definitely moving in the right direction. Very, very optimistic that we could see him in the lineup tomorrow. So that's what I'm shooting for there."

Rodríguez is not in the lineup for Monday’s game against Texas and he missed the three-game weekend series against the Houston Astros due to soreness in his left wrist. Rodríguez injured the wrist sliding into second base during the final game prior to the All-Star break against the Rangers in Texas. While it didn’t appear to be a problem in the moment, the issue was exacerbated as Rodríguez clubbed 81 homers in the Home Run Derby last Monday night.

"If I was 21 years old, would I want to participate in the Home Run Derby with millions of people watching me with the greatest players in the world? Yes, I would want to do it. So, again, a little setback coming out of it. We will deal with it," Servais said. "I am not mad at Julio. I love Julio. We all love Julio. I'm not disappointed. I'm not any of that stuff. He's 21. He plays his heart [out], he plays every day. He does everything we asked him to do. We just had a little bump in the road and we will survive it and he will be back and he'll be playing great before you know it."

Rodríguez said pregame on Monday that he was feeling better than he had in previous days. He said they are erring on the side of caution so that the soreness doesn’t linger with so much of the season still left to play.

Rodríguez said he intended to make some swings pregame and take part in the team’s on-field work. Servais said he is just in need of clearance from the team’s training staff to green light the return of Rodríguez to the lineup.

"I just need the trainer to tell me he's ready," Servais said. "I don't need a whole lot to tell me. I don't really need to see a whole lot. If they tell me he's good to go. He's in there. So that's what we're waiting on right now."

Jesse Winker is also not in the lineup tonight after he injured his ankle in a collision with Jeremy Peña at first base in Sunday’s loss to the Astros. Servais said Winker could be available for substitute duty late in Monday’s game, if necessary.

"If we could [stay away from Winker tonight], yes, in a perfect world," Servais said. "I'd love to win the game 8-2 and not have to worry about it. Typically, we don't play a lot of those games, but maybe tonight will be the night."

With Rodríguez and Winker out, the Mariners are using three guys in Adam Fraizer (left field), Dylan Moore (center field) and Sam Haggerty (right field) in the outfield on Monday night that are typically infielders first-and-foremost.

They’ve all done a really good job," Servais said. "Dylan has not played much center field in his career and he's looked pretty good out there. And Frazier has handled everything thrown at him, and then Haggerty's not an outfielder, you know, by trade, so to speak, but he's handled it well."

Mitch Haniger is set to join the Tacoma Rainiers on Tuesday to continue his rehab assignment. He appeared in three games for the Everett Aqua Sox this weekend in his first games back from a high-ankle sprain sustained in late April. He went 3-for-9 with a home run and two RBI.

"Long layoff," Haniger said. I know, for me, usually a guy coming out in spring training takes me a little while. Luckily, I’ve been hitting a lot on the machine in there and that’s been helping. I’ll be able to play back-to-back frequently with the DH (with Tacoma) which will really help just getting those at-bats back.

"I think I just need quantity right now. Just playing," Haniger said. "I can’t tell you like when that will be usually you feel it when you feel ready. And I don’t know when that will be. It’s hard to predict."

Haniger has been swinging a bat for a few weeks and has ramped up his conditioning work prior to going out on assignment. The anticipated timeline for the injury was 8-10 weeks before being able to return to games.

Haniger said he came out of the weekend feeling good and just expected soreness.

"A little bit, but I feel like it’s normal," Haniger said. "Any time you get hurt, the first week or so back there’s soreness and that’s expected."

Outfielder Taylor Trammell continues to progress from a hamstring strain that led to him going on the injured list on June 29. He is nearing a rehab assignment as well.

"He's moving along really, really aggressively, picked up his running," Servais said. "I think you'll see him out on a rehab [assignment] probably when we go out on the road [after Wednesday’s series finale with Texas]. So will be anxious to get him out there, get him playing too. Just gives us more options because we are a little short in the outfield right now."