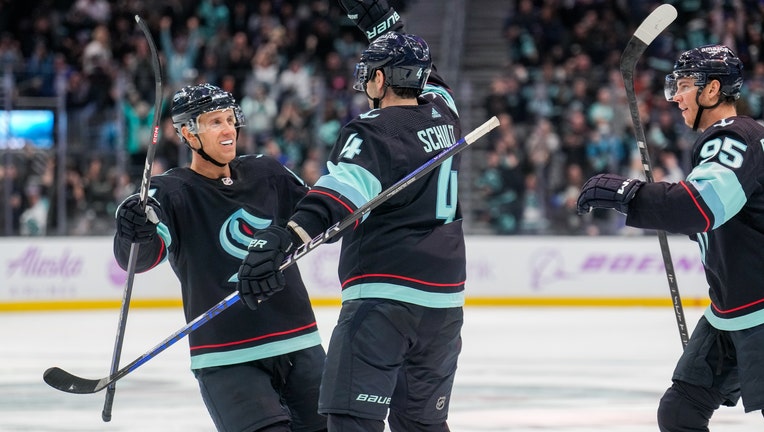 SEATTLE, WASHINGTON - NOVEMBER 17:Jaden Schwartz #17 congratulates teammate Justin Schultz #4 of the Seattle Kraken for his goal during the third period of a game against the New York Rangers at Climate Pledge Arena on November 17, 2022 in Seattle, W

SEATTLE - Justin Schultz scored his second goal of the game 3:39 into overtime and the Seattle Kraken snapped a two-game skid with a 3-2 win over the New York Rangers on Thursday night.

It was the first multigoal game for Schultz, who is in his 12th NHL season. The 32-year-old defenseman has three goals this season.

"I liked the way we responded in overtime," Schultz said. "We found a way to keep going to get the two points."

"We had a great response and obviously got a great goal in overtime," Jones said.

"We just stayed with it," Kraken coach Dave Hakstol said. "It’s poise and possession. When we didn’t have the puck, the guys were organized and pushed things to the outside, checked well and gave us the opportunity to make the game-winning play."

After a scoreless first period, Seattle built a 16-5 edge in shots on goal as the teams finished the frame tied at 1.

Schultz scored his first goal at 9:27 of the third to give Seattle a 2-1 lead. Trocheck responded at 18:06, tying the score with the Rangers’ second power-play goal and sending the game to overtime.

"Big goal by the power play at the end there to get us a point," captain Jacob Trouba said. "Igor played well. We know we can play our game for longer periods of time. That’s what we’ve got to do, and that’s what we’ll do for the rest of the road trip."

Seattle won in OT for the first time in four tries this season.

"It was just a little bit more structured," Schultz said. "The three we lost were a little bit all over the place. ... (We) practiced it. I thought you noticed that tonight. We did a much better job."

McCann scored the Kraken’s opening goal early in the first period. It was his seventh of the season. He got assists from Will Borgen and Jordan Eberle, who has four goals and three assists in his last five home games dating to Oct. 27 against Vancouver.Zibanejad, who has points in nine of his last 10 games, scored a power-play goal at 14:58 of the first. Seven of Zibanejad’s 10 goals this season have come on the power play. He has 75 power-play goals since joining the Rangers in 2016-17.

NOTES: Seattle forward Yanni Gourde played his 400th NHL game. Gourde has appeared in 310 regular-season games for the Tampa Bay Lightning and 90 regular-season games for the Kraken. ... It was Hockey Fights Cancer night in Seattle. ... Rangers defenseman Adam Fox has a seven-game point streak. He had an assist on Thursday. ... This was the Kraken’s first win over New York. The Rangers went 2-0-0 against Seattle last season.