SEATTLE - Q13 sports anchor Michelle Ludtka had the chance to sit down with Sounders coach Brian Schmetzer for an exclusive interview ahead of Sunday's MLS Cup.

Ludtka: As an outside spectator watching that game, it almost seemed like that result, that atmosphere, everything that went into that game took your team up a notch. It took them to another level where we all know they're capable of being. What do you think that's there? Or is that just kind of outside spectators, maybe looking and into it because it was a great match and a great result?

Schmetzer:  Well, sport the sport. I mean, look, first five games of the year, what did we look like six games of the year? What do we look like we were flying up and down the field and really go, go, go and we're beating teams, multiple scores, you know, stuff like that. That game against LA FC was different. Yes, we scored three goals. But why did we score the three goals? You know, we defended very well. We defended very effectively, and Nico and roll very effective with the chances they had they buried them they put them away. So, the difference between the start of the season and that game certainly is there is a difference there. But the team has always been able to play at a high level. And what I love about my team, what I love about the ability of this group for many, many years is that they find different ways to win in different games. Again, it's still a game of soccer, there are so many dynamic things that are going on the field at the same time that we can coach them to do this in this situation, but then that situation may never manifest itself. And something over here comes into play and they go, ‘Oh, well, I can use what I learned here and we're going to do it over here and we're going to be successful.’ So, they come up with that stuff all the time during the run of the game. 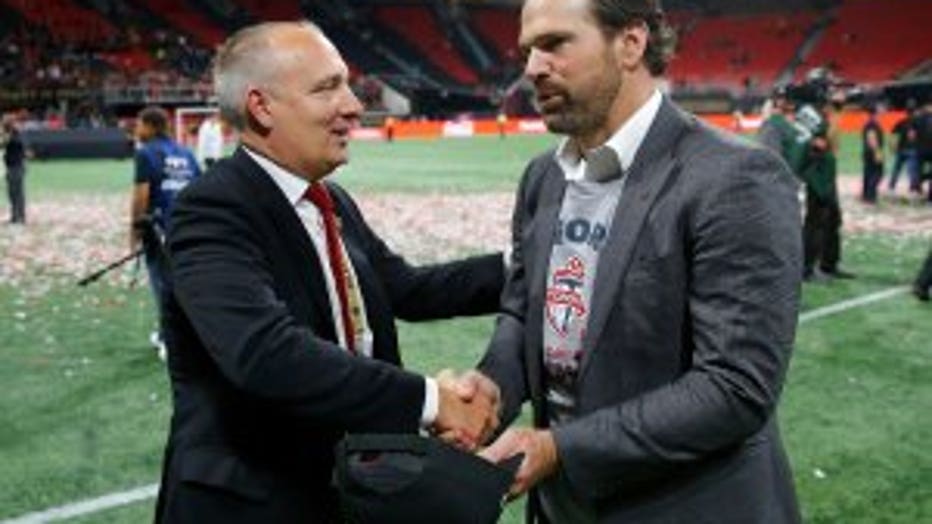 Head coach Greg Vanney of Toronto FC is congratulated by president Darren Eales of Atlanta United after their 2-1 win in the Eastern Conference Finals on October 30, 2019 in Atlanta, Georgia. (Photo by Kevin C. Cox/Getty Images)

Ludtka: One of the main storylines as we get ready for the MLS Cup Championship, is it's a rematch with you in Toronto. It's the third game in this huge series since, and by chance, you guys are playing them again for the third time in the MLS Cup final. Do you look at it as a rematch?

Schmetzer:  Yeah. I mean, look, you have to give Greg a lot of credit. I mean, there's another coach out in MLS that's gone to three finals in four years. And it's Greg Vanney. And he's done a tremendous job. So, you know, a lot of hype around here locally about me. There should be a lot of hype about Greg. he's accomplished the same things. You know, and I think the rivalry is strong. I mean, look, it's not Seattle or Portland. You know, that's just the way our league is set up. But if you had to choose a rival for us to play at home, MLS Cup match, why not Toronto? Why not?

Tune in to JoeTV on Sunday for pregame coverage and postgame reaction.