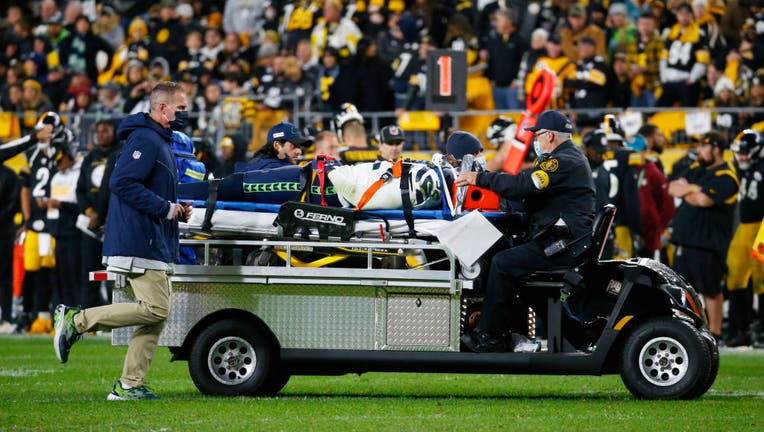 PITTSBURGH, PENNSYLVANIA - OCTOBER 17: Darrell Taylor #52 of the Seattle Seahawks is carted off the field after an injury during a game against the Pittsburgh Steelers at Heinz Field on October 17, 2021 in Pittsburgh, Pennsylvania. (Photo by Justin K

RENTON, Wash. - The Seattle Seahawks say tests on linebacker Darrell Taylor’s neck have come back clear and are not ruling him out of playing next Monday against the New Orleans Saints.

Seattle coach Pete Carroll said Monday that both a CT scan and an MRI have shown that Taylor does not have an injury to his neck and may have suffered more of a shoulder injury in the fourth quarter of Sunday’s loss to Pittsburgh.

"He got jammed pretty good. We’ll have to wait and see what it’s like, but it may be a little bit more in his shoulder even as we figure it out," Carroll said.

Taylor was taken off the field on a backboard during a lengthy fourth-quarter delay as a precaution after his neck was compressed in a collision. Carroll said Taylor was upset at having to be immobilized and wanted to jump up and walk off the field on his own.

Taylor was taken to a Pittsburgh hospital following the injury, but was cleared to fly home with the team after the game.

"Whenever they take a guy off like that the threat is so huge," Carroll said. "He came out great, so we’ll hope for the best and he may have a chance to go this week."