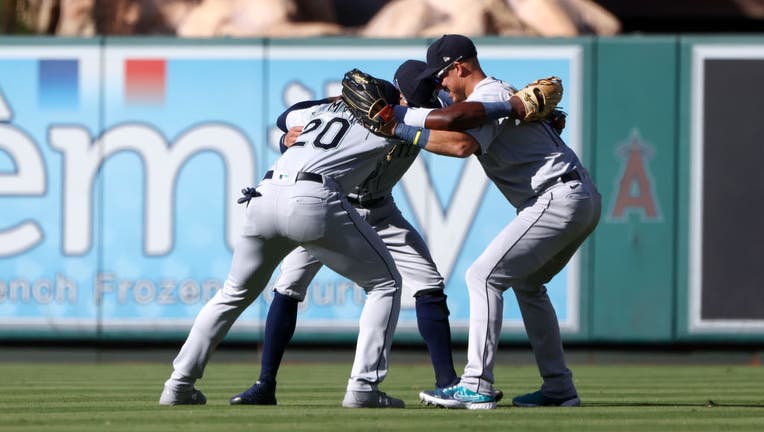 ANAHEIM, CALIFORNIA - SEPTEMBER 19: Taylor Trammell #20, Jake Lamb #18 and Sam Haggerty #0 of the Seattle Mariners celebrate a 9-1 win against the Los Angeles Angels at Angel Stadium of Anaheim on September 19, 2022 in Anaheim, California. (Photo by

ANAHEIM, Calif. - Carlos Santana not only delivered a huge birthday present to his mother on Monday, he helped get the Seattle Mariners back on track in their bid to make the postseason for the first time since 2001.

Santana homered twice, including his first grand slam in three years, and Ty France drove in four runs as the Mariners snapped a three-game losing streak with a 9-1 victory over the Los Angeles Angels.

"My wife told me, ‘Like, I think if you don’t get a home run you don’t love your mom.’ I said, ‘OK, I love my mom,’" Santana said after the 15th multi-homer game and fourth this season. "That’s a lot of love right there."

The 13-year veteran — who helped Cleveland to four postseason appearances, including the 2016 World Series — has hit 15 of his 19 home runs this season since Seattle acquired him from Kansas City in late June.

He has also gone deep seven times in his last nine games for Seattle (81-65), which opened a 4 1/2-game lead over Baltimore for the AL’s final wild card spot. The Orioles played Detroit later Monday.

"After the second one I said, ‘You must really love your mom,’ and he goes, ‘She’s the best,’" manager Scott Servais said. "Carlos has been awesome. He’s a veteran presence in the clubhouse and helping guys, even through this little skid. Those guys are valuable, especially when they hit grand slams."

Logan Gilbert struck out a career-high 11, allowing one run and four hits in six innings and helping prevent the Mariners from being swept in a four-game series at Angel Stadium for the first time in 10 years.

Gilbert got Shohei Ohtani to chase a slider to end a 12-pitch, at-bat in the first inning and then struck out the side in the second.

"I felt pretty good. I think it just means your pitches are working and you’re getting good counts, which is the priority all the time. It’s not all about the strikeouts, but it’s nice to see," Gilbert said.

Ohtani had two hits and scored in the sixth inning. The reigning AL MVP has hit safely in his last five games and is 6 for 17 during that span. Mike Trout was not in the lineup due to a planned rest day.

Seattle took a 5-0 lead in the fifth inning on Santana’s fifth career grand slam. He drove a 91.5 mile fastball from José Suarez 420 feet beyond the bullpens and into the stands in left-center. He then added a solo shot to center in the ninth off Mike Mayers that went 423 feet.

France’s double down the left-field line drove in J.P. Crawford to put the Mariners up 1-0 in the first. France hit a three-run homer off Zack Weiss to make it 8-1 in the seventh.

"The first four innings he was good," Angels interim manager Phil Nevin said. "Crawford took some good swings off him but he threw the ball well until that (fifth) inning. You fall behind 3-0 and come in on a guy like Santana, he is going to do some damage."

Los Angeles had a 10-9 edge over the Mariners in 2022 and won the season series in three of the last four years.

Mariners: CF Julio Rodríguez (back) took at least 30 swings off a batting tee before the game and could return to the lineup Tuesday. ... C Cal Raleigh remained out as he deals with pain in his left thumb.

Nevin said his plan is for Trout to play all but one of the remaining 15 games in center field, with the other appearance likely as the designated hitter.

Mariners: Continue their 10-game trip with three in Oakland. RHP Luis Castillo (7-5, 2.68) is 3-1 in nine starts since being acquired from Cincinnati at the trade deadline.

Angels: Head on the road for six games beginning Tuesday against Texas. LHP Patrick Sandoval (5-9, 2.99 ERA) is 0-2 in five games vs. the Rangers.