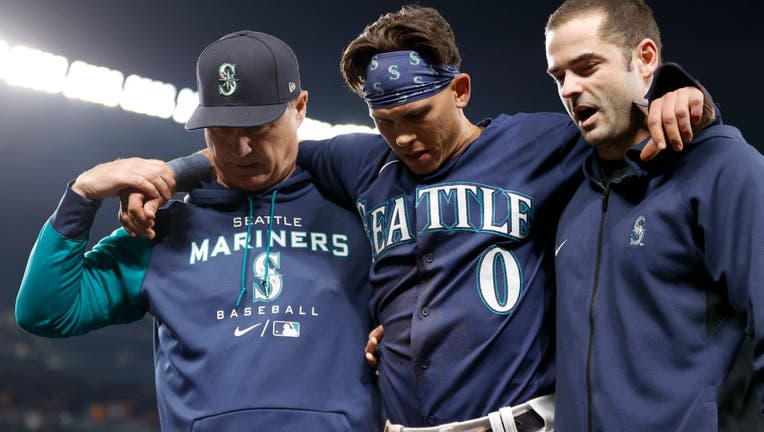 SEATTLE, WASHINGTON - OCTOBER 03: Sam Haggerty #0 of the Seattle Mariners is helped off the field during the ninth inning by manager Scott Servais #9 and medical staff against the Detroit Tigers at T-Mobile Park on October 03, 2022 in Seattle, Washin

SEATTLE - Seattle Mariners utility man Sam Haggerty will have an MRI on Tuesday morning to determine the severity of a groin injury sustained on a ninth inning stolen base in Monday night's 4-3 loss to the Detroit Tigers.

Haggerty needed assistance from manager Scott Servais and a trainer to exit the field after a hard slide into second base. The impact of the collision with the bag caused Haggerty's leg to recoil violently, so much so that it seemed as if the injury was to his ankle upon first glance.

Servais said after the game it was his groin that was injured instead.

"Hags has had such a great season. He's kind of that spark plug guy. You fire him in there and he makes things happen. Sure enough, he gets a big hit late in the game tonight Got a great jump and I think he just let his guard down. I think he thought he had the base stolen pretty easy, and he did. He made a late slide and caught the bag wrong."

Haggerty was a late addition to the lineup after Jesse Winker was scratched due to a neck issue. Winker had been in the lineup until a little over an hour before first pitch.

"It locked up on him. He came in today and say he wasn't going to be able to go," Servais said of Winker.

Haggerty had two walks and delivered a two-out single in the ninth as the Mariners tried to overcome the one-run deficit. Seattle's hopes of hosting in the first round of the playoffs were hanging by a thread with Toronto beating the Baltimore Orioles in a 5-1 rain shortened game earlier in the day. Haggerty got a great jump off reliever Andrew Chafin to steal second and put a runner in scoring position to tie the game when the injury occurred.

Haggerty immediately put a hand in the air to call for timeout and writhed around on the infield dirt as Servais ran out to attend to him on the field. When he was helped to his feet, he didn't put any weight on one leg initially before slowing leaving the field.

"It's tough for everybody," Servais said of the injury to Haggerty. "Everybody knows how much he means to our ball club and having that kind of weapon that you can put in off the bench to pinch-run. He gives you really good at-bats. He does a good job in left field. I don't want to get too far down the road. We'll see what the MRI shows tomorrow."

Abraham Toro had been optioned to Triple-A pregame on Monday with Julio Rodríguez being activated off the 10-day injured list. Toro could return to the roster for tomorrow's double-header against the Tigers with Haggerty being injured.

Chris Flexen will start the first game of the double-header for the Mariners with the second game being a bullpen effort as the team tries to manage its pitching staff ahead of Friday's playoff opener against either the Blue Jays or Cleveland Guardians.